On Friday, November 23, the United Hmong Family’s Minnesota Hmong New Year kicked off its 40th anniversary. With the theme of “Passing the Torch,” it was a moment not only to honor the long legacy of Hmong in Minnesota, but also to look forward to an even brighter future for the community.

Over four decades ago when Hmong people began arriving in Minnesota as refugees fleeing from war-ravaged Laos, one could hardly imagine that they would grow into the vibrant community that they are today. Even though the Hmong population continues to face crucial challenges as new(er) Americans, there are many reasons to rejoice.

With a record number of Hmong Americans ready to take office, budding Hmong-led food and beverage businesses, and a thriving arts and culture scene both in Minnesota and nationwide, today, Hmong Americans are breaking new ground in fields as varied as law, finance, and health, to museology, poetry, and politics.

But as diverse lives as people of Hmong descent may lead in the world today, there is one enthralling celebration that unifies people from all walks of life. The annual Hmong New Year, a hallmark festival that observes the coming of the New Year according to the Hmong lunar calendar with three days of revelry, brings with it opportunities to both nurture and re-define the meanings of Hmong-ness amid major cultural shifts.

For United Hmong Family, a non-profit organization that was formed in order to represent the Hmong community and cherish its unique heritage and culture, this year’s festivities were particularly historic. On Friday, November 23, the United Hmong Family’s Minnesota Hmong New Year kicked off its 40th anniversary with the theme of “Passing the Torch”.

“This is a milestone for us,” said Mee Vang, Vice President of the United Hmong Family Board of Trustees. “The 40th anniversary of this festival signifies an achievement in the Hmong American experience.”

Dignitaries including Teng Ly, DFL Governor-elect Tim Walz, and St. Paul Mayor Melvin Carter, amongst other state and local leaders attended the ribbon-cutting ceremony and joined in the festivities. The chosen venue, as in years past, was the RiverCentre in the City of St. Paul, the polestar of Hmong culture and heritage not only in the Midwestern region, but also nationwide and beyond. The RiverCentre stood transformed: a magnificent arena, complete with a red carpet, where one could behold the entire range of Hmong identities in dynamic concert with one another.

Vang noted that older generations tend to recall the space as the Civic Centre, a now demolished structure that remains, in memory, a kind of monument to Hmong heritage in Minnesota. “Even now, to them, it’s not the RiverCentre. It’s where the Hmong New Year takes place,” she said, smiling, “Our name itself has reached far and wide, and that’s something we’re really proud.”

Organizing such a massive event takes significant legwork – tens of thousands of people of Hmong descent flocked to the celebration from places as far as Thailand, France, and Australia. Each came eager to flaunt their best ethnic wear and jewelry, witness the Miss Teen International and Miss Hmong Minnesota pageants, enjoy song and dance performances by celebrities and participants, toss balls in homage to the playful courtship practice, and reunite with cousins rarely seen.

“I remember when I was young I would wake up at 3:00 am because I was so excited,” beamed Mai Neng Pha, Assistant Secretary to the Board of Trustees. “I couldn’t wait for my mother to help me put on my Hmong clothes, meet friends, and new people. Even now, as an adult, the event excites me. I’m fortunate that I have children who get really excited about it, too.”

Hmong New Year 2019, with the reflective theme of “Passing the Torch,” marked a moment not only to turn to the past and honor the long legacy of Hmong in Minnesota, but also, with renewed enthusiasm and energy, to look forward to what is to come. Bolstered by the ideal of inclusivity and a radical commitment to having tough conversations about diversity within the Hmong community, as Pha and Vang asserted, Hmong youth and women, in particular, have been emerging at the forefront.

“We had the youngest committee we have ever seen this year. College students and young professionals – many mature, passionate, and dedicated women ready to collaborate and cooperate with each other – stepped up to take on the challenge of organizing this event. 10-20 years ago the scene was dominated by men, and it would have been taboo for a woman to speak up,” Vang contends. “But our young people, especially women, must be recognized as leaders. It’s our responsibility to mentor and encourage them. We can provide guidance, but they are now the leaders.”

At this year’s festivities, spurred on by the contributions of younger generations of Hmong, the fresh energy was palpable. For the first time ever, the Hmong New Year organized an essay contest in order to provide the community with a platform to consider the theme – “Passing the Torch” – through writing in either Hmong or English. The judges of the competition included eminent figures such as Hmong-American filmmaker Kang Vang, and Sophia Vuelo, who was sworn in as Minnesota’s first Hmong American judge. Leon Xiong, a senior in high school who is eyeing a future career in nonprofit work, won the $1,000 grand prize and recited his essay before the cheering crowd.

In another first, community members performed huplig or the traditional Hmong soul-calling ritual. “We wanted to recognize elders who have passed long ago, and honor their memories by calling their souls homes. There are widows and orphans in the community, and there is nobody left to call their souls home. It was important for us to remember them,” said Vang.

Wandering through the aisles filled with booths offering the latest in Hmong fashions, beauty products, K-drama paraphanalia, and even university admission guidance, it became clear that the Hmong community, though grounded in a rich history that goes back centuries, is intent on crafting new and brighter futures for members young and old, domestic and international, normative and different.

“We can be traditional, but we can be contemporary, too, can’t we?” said Mai Choua Chang, a business-owner who specializes in handcrafted jewellery that often combines traditional Hmong motifs with modern elements like pearls and jewels.

Indeed, 40 years on, it all seems more than possible. 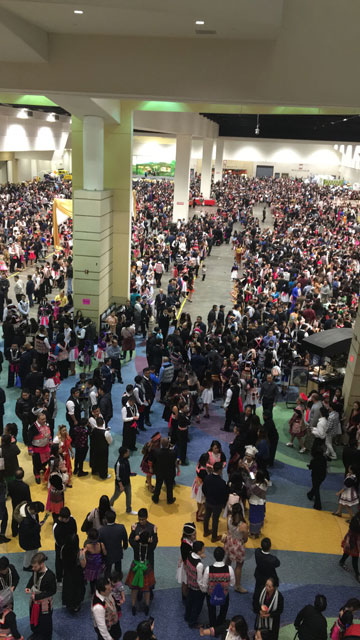 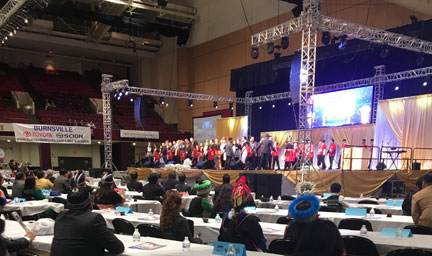