That’s a pretty good example of a good YouTube title. Titles should be catchy and should grab your attention wanting to know more. Sometimes, those superlatives in brackets hook the reader even more. I care about the titles a little bit more so than the thumbnail, believe it not! Since sometimes thumbnails can be more clickbait, or false, rather than the title. I know that when I’m on my YouTube home screen, my eyes will equally look at the thumbnail as well as the title.

Other good title examples are just simple truth telling titles. For instance, “Why I stopped eating salt.” I mean that garners a viewer’s attention and information right? Or lists do very well. A famous recent YouTuber known for breaking into an already saturated field of photography is Peter McKinnon. He’s was doing everyday vlog type videos, but when he released “8 Camera Hacks in 90 Seconds,” that video shot up to millions thus helping his past and future videos and his channel overall. I love list videos, especially since I’m still growing my channel. I watch YouTube channels, such as Video Creators or Video Influencers, where most of their videos are titled like, “3 ways to get viral videos,” or “5 quick steps to tell a story.” Titles like that grab my attention.

As with anything, I’ve been telling you what to do, but sometimes it’s better what not to do. Titles that are filed are great for the producer of the content but bad for the viewer such as “Park season 1, episode 3” or “Beach 12/24/04” leaves very, very little for the viewer to make a mental note in the back of their mind or when they want to share or tell someone about the video. This goes again into metadata. Remember, at the end of the day YouTube is known for SEARCH! It’s harder to search for the filed type of videos, but easier to search for “Baby Eats Entire Pie!”

Another bad type of titles are inside jokes. A title that perhaps you and only your best friends would know. Here’s an example, “Pikachu seeker 145.” I totally made that up. Gaming can have lots of inside jokes between gaming communities. But if your aim is for views and subscribers, have a sense of what the viewer would want to see. Something that’s easy on the eyes, reveals information and paired with the thumbnail will garner that desirable click! 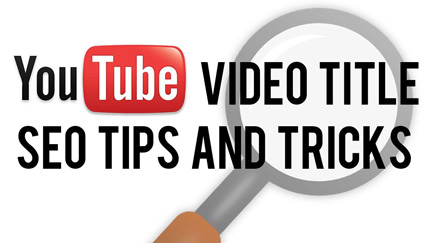