Why The Turtle Crosses The Road

Want to help preserve one of the coolest parts of Minnesota’s natural history, something that pre-dates dinosaurs but still can be found all across the state?

Keep an eye out for turtles. They’re on the move this time of year, and the biggest threat to their continued existence is something most adults use on a daily basis: the automobile.

Unlike the infamous chicken of many riddles, turtles cross roads because they actually have someplace to go. In late spring and early summer, female turtles move from the ponds, streams and wetlands where they spend most of their lives to upland areas where they lay their eggs.

When a road runs between those two places, many turtles become roadkill, because as hard as their shells may be, they’re no defense against a speeding car or truck. Roadway mortality is believed to be a major factor in turtle population declines throughout the United States.

“Turtles pre-date dinosaurs by millions of years, and they’ve outlasted them, too,” says Erica Hoaglund, a biologist with the Minnesota Department of Natural Resources’ Nongame Wildlife Program. “But they’re very poorly adapted to roads. They move slowly and when threatened, freeze and tuck up into their shells.”

Because turtles have been around since prehistoric times, and because they’re such unique creatures, carrying their house with them and living sometimes as long or longer than humans, they’ve figured prominently in numerous legends and myths. Some Native American tales relate how the Great Spirit created their homeland by piling soil on the turtle’s back after a huge flood.

Minnesota has nine native species of turtles, two of which are on the state list of threatened species: Blanding’s turtles and wood turtles. Painted turtles, with their bright reddish orange bottom shell and yellow striped head and legs, are the most commonly seen turtles in the state. Snapping turtles are the largest, with top shells typically about a foot long. The biggest snapper ever recorded in Minnesota weighed 65 pounds and its upper shell measured nearly 20 inches. They’re normally docile in water, but may snap and lunge at people if they feel threatened on land.

Turtles spend all winter tucked into the mud at the bottom of a lake, pond or river, where their metabolism slows way down. They obtain needed oxygen from the water as it contacts exposed mucus membranes in their mouth and – get this – their butts. Come spring, they move to shallow open waters and bask in the sun to warm up and get themselves going. Females leave the water in late May or June to find an upland area where they can dig a hole and lay their eggs, sometimes traveling a mile or more there and back, often crossing busy roads to do so. Eggs remain in the nest all summer. The gender of the hatchlings is affected by the surrounding temperature, with hotter weather producing more females, and cooler temps more males.

The prospects for baby turtles are grim. Eggs are often dug up and eaten by raccoons, skunks and foxes; in one study of nesting Blanding’s turtles, 93 percent of the eggs met their fate before even hatching. After they hatch – sometime between mid-August and mid-October – the baby turtles are exposed to further perils of predation and roadkill as they crawl back to water, where they still may be eaten by large fish. Even if they do survive to adulthood, turtles don’t reach sexual maturity (the age when they start reproducing) until they’re between 5 and 15 years old, depending on species.

Historically, the low reproductive success of turtles has been offset by the animals’ longevity – some Blanding’s turtles, for instance have lived 70 years or more (turtles can be aged by counting grooves on their shells, much like tree rings). But with ongoing habitat loss and road mortality, many biologists believe turtle populations are increasingly at risk.

DNR’s Hoaglund points out that the consequences of a turtle being struck on the highway go far beyond just that one individual. It also eliminates all the other turtles that individual might have produced over the decades of its life, affecting the whole population.

“Turtles are way cool,” Hoaglund says. “What other critter can you think of that packs its house on its back, lives to a ripe old age, stars in lots of traditional tales, and can breathe through its butt?

“This time of year, they need us to exercise a little extra caution when we’re driving, though. Keep an eye out for turtles, and give ‘em a brake.”

(Learn more about Minnesota’s turtles and how to help them at www.mndnr.gov.) 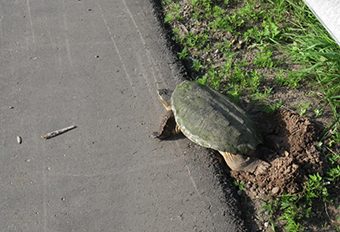 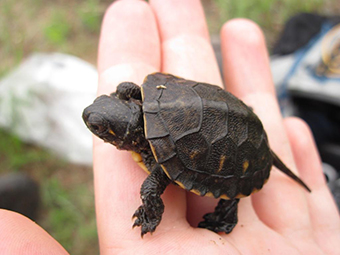