What Does the Political Chaos in the U.S. Mean to Hmong Citizens?

For many Hmong citizens, all these political ripples and struggles between the powers that be may seem like two bickering children fighting over a piece of candy but it affects us more than we think.

Immigration. Due to the ever changing disagreements and policy on a day-to-day basis based on presidential executive orders and federal court rulings, the inconsistencies of policies and procedures based on interpretations by people in leadership positions, it has become the will of the people in power and may not often based on equitable constitutional rights. The newest immigration ruling by a federal court gave the U.S. government the ability to not provide a safe place for asylum seekers while they wait years to find out if they could get asylum or not. Basically, if you are seeking sanctuary because your life is in jeopardy, you will have to survive being killed before the U.S. takes your case to court. Imagine you are running from someone who wants to kill you and you get to a safe house only to be told stay outside and wait for years until we have time then we will listen to see if you can come in. Chances are the killer is waiting around the corner of the house until the door closes.

Gift Of The Leadership Chaos. One of the challenges of the Vietnam War for the U.S. was that the enemies and allies looked the same. U.S. soldiers couldn’t distinguish between friendlies and enemies because there were common ethnicities on both sides. Of course Hmong knew their kin on the Vietnam side and vice versa so they knew who their enemies were even though they lived on different sides of the border. When the Hmong and other ethnics came to the U.S., it was difficult to know who supported us or dislike us, especially when they have no clue why we came to this country. The most beneficial aspect of the last two year’s leadership chaos at federal and state levels is that we now have a clearer picture of who supports and value diversity-particularly in racial tension issues. We have people who were inspired by a government that promotes division and hatred coming out into the open because it appears to be safe for them to truly show their colors. Were as, before we didn’t know who supports us in leveraging equal rights in the community at large. We now know who is for us and who is against us and that’s a start. Look at your representatives and decide for yourself. Is your leader with you or against you? Watch how that leader talks and vote. You have the gift to decide his/her position every two to four years.

Privilege Is A Choice Not A Right. As most people can plainly see, those who have privileges are the ones who have the most choices. When you have leverage and empowerment, the choices you make tells who you are. We frequently tell our young people that “with great power comes great responsibility.” In the case of many of our leaders, it appears that with great power comes great ability to choose with little or no ramification. If all people see through the lens of what’s good for the people and not for themselves we would all have the same bottom line. Often, people want to maintain what they have. So alternatively, when people don’t share power and privilege, you have a faction against another faction (i.e. our two political party system). The worse part of privilege is that when we all have it, it makes us all a better people and system. Bill Gates once said, “I can’t possibly spend it all or take it with me so I give it out as fast as I can.” Imagine that sharing is not just money or materialistic things, but privileges and choices. There are no consequences in sharing privileges. However, there are people who horde them because of fear of losing their power and choices. Leverage is the best equality tool so fighting for it is the most critical task. Remember, many people who have privileges will not be willing to freely empower others. Nevertheless, people ultimately have the power to make that change by making demands through votes.

Hmong Have Countries Not Country. It is difficult for many people to understand how many Hmong express that they don’t have a country when Hmong around the world have many countries. In a time when the world has already been claimed spatially, Hmong who want a specific land to call Hmong Land are not in tuned with the time. Any country will never just give up a piece of land they owned and turn it over to another group of people. With that said, Hmong have a lot of political power in votes. Our lacking of a country is not in the securing of a piece of land, but rather is the participation of political leveraging of the land we live in. Other people know this, which is why they don’t what to empower Hmong with the capacity to leverage. They tend to keep their privilege by suppression Hmong and diverse people from gaining a foothold on equal rights. So how do privileged people keep their votes as majority? They unified in keeping others out through divisiveness and hatred by inciting fear. Fear that others will take our jobs. Fear that others will change our laws. Fear that others will demand that we accept and value other cultures and traditions. People who do not seem to see wrong doings or inequality normally do not see because they choose to – for fear of losing what they have. That is why so many leaders in congress pretend to see no wrong doing so they can continue to keep what they have. They rather align with bad leaders, who enable them than lose their leverage. Remember most of these people have been there for decades and even stay beyond retirement age. So Hmong people, we have countries if we are willing to play the leveraging game. 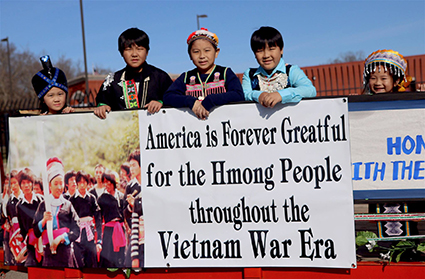