Warning For Local Parents Who Suspect Teen Is Vaping

Doctors are warning about how vaping can damage the lungs of teenagers. Recently, physicians spoke out about kids who landed in the hospital with severe medical problems and they suspect it is tied to vaping.

This is an alarming example of why local parents are taking their children in for simple tests to see if they are among the nearly four million American high school and middle school students who are vaping right now.

E-cigarette use among teens is skyrocketing. A recent study by the National Institute of Drug Abuse revealed more than a third of high school students tried it over the last year. One 15-year-old boy even landed in rehab after he says he got hooked and was spending $170 a week on vaping nicotine.

There are several tests available that can detect vaping/nicotine use and there is no need to see a doctor first.

Urine Test – Good choice if parent suspects child has used nicotine over the last few days.  An instant test is available, and parents can get results within five to ten minutes

Hair Follicle Test – This is a good option for parents who think their child has been either vaping or smoking nicotine for a long period of time and the child might stop using just to get through the test.  It takes 3 days for nicotine to start showing in hair strands.  A test of hair strands can determine if someone has used nicotine as far back as three months.

Blood Test – A simple blood draw can detect traces of nicotine about two hours after use.

Testing can be confidential. No one has access to results but parents. They own the results and they can use an anonymous name to protect their child.  Most importantly, the results give parents and other loved ones answers so they can take next steps, if needed. 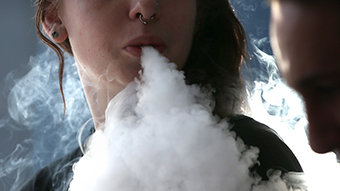