On Tuesday, June 11th, nine Minnesotans were recognized with the state Department of Human Services’ 2019 Outstanding Refugee Award. The St. Paul ceremony honored refugees who have made significant contributions in civic engagement, leadership, and entrepreneurship.

Vayong Moua, who was born in Laos and has been living in Minnesota for 19 years, was among the awardees. A resident of Eagan, Moua works as Health Equity Advocacy Director at the Center for Prevention at Blue Cross Blue Shield Minnesota, and serves as the chair of the Department of Human Services’ Cultural and Ethnic Communities Leadership Council (CELC).

“I’m only grateful for the recognition, though I know that the real sacrifice came from my parents and ancestors who fought for my opportunities. This honor illuminates how refugees and civic engagement are deeply intertwined,” says Moua, reflecting on what receiving this honor means to him.

“I am as American as papaya salad, stick rice or apple pie. I look at all the awardees and their amazing accomplishments and identities, and I know it’s their families and communities that raised them up to be noble warriors and change agents. I hope this award can shed light not only on outstanding individuals but more so on the leadership and tenacity of refugee communities.”

In addition to being a strong voice for the radical inclusion of refugees, Moua has been a vocal advocate for safer streets, expanded access to healthy foods, and reducing tobacco use in Minnesota. He co-founded the Minnesota Complete Streets Coalition that led the passage of the Complete Streets law, and was named a member of the first cohort of the Change Network Minnesota back in 2017. He was a Public Policy and International Affairs Fellow, LAAMPP Fellow, and Humphrey Policy Fellow as well.

“I plan to continue celebrating the definition and meaning of “refugee” and ensure that policies and systems embed us into core decision making. Too often, refugees are framed only as displaced, exploitative, or problematic to public resources. I want to challenge the misconceptions of refugees as leeches, disloyal, and detractions to the American experience,” Moua asserts.

“I never met either of my grandfathers, my uncle was a prisoner of war, my grandmothers raised families as strong widows, and my people [Hmong and Hmong-Americans] continue to face structural racism today…precisely because of our service to the American government. Refugees are not charity cases for the U.S., we are here because of pre-existing American alliance, support, or impact. Refugees are common good creators and exemplify American leadership. The social inequities faced and overcome by refugees represent the promise of advancing equity and justice.”

Last year, along with colleague Janelle Waldock, Moua oversaw a collaborative report between Blue Cross and the University of Minnesota that revealed the impact of health inequities in the state. The report, entitled The Cost of Health Inequities in Minnesota, investigates the disproportionate prevalence of preventable disease and death within indigenous and communities of color in Minnesota. The report found that health inequities cost the state more than $2 billion annually.

As a recipient of the Outstanding Refugee Award, Moua wants to continue working towards eliminating these health disparities. He encourages young refugees to pursue politics and become changemakers.

“First and foremost, embrace your cultural roots and ancestry so that adapting to America doesn’t displace your culture and identity. With ancestral roots, you can develop wings in any pursuit. Not despite, but rather, precisely because of your refugee background… you have the potential to rebuild and redefine your personal and community life. Get civically engaged in policy, politics, and advocacy… as so many forces seek to marginalize us. Know that political interests exist to make us apathetic, bewildered, exhausted, and irrelevant… so be the policy maker and change agent wherever you are,” Moua offers.

“Whether you’re a student, teacher, mother, or worker… advocate for refugees in your daily life. Love your community (however you define it), but grow strong cross cultural alliances and build power with different groups of people for health and racial equity. You’ve already crossed the Mekong, desert, ocean. You’ve already faced persecution and tragedy, so your people are battle tested and forged for long range prosperity. So, continue the generational bridge forward and backwards. Indeed, we are our ancestor’s wildest dreams but we are also fierce realities to be celebrated here and now.” 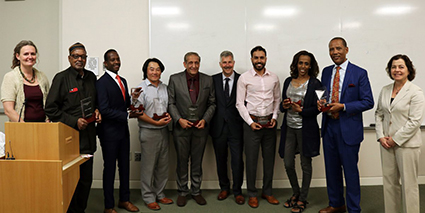 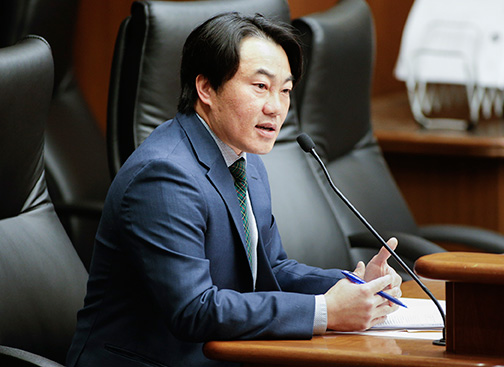 Vayong Moua, director of Health Equity Advocacy with Blue Cross and Blue Shield of Minnesota, talks to the House Agriculture and Food Finance and Policy Division. Photo by Paul Battaglia