With an emphasis on education, preservation, and cultural programming, Mai Nhia Vang, founder of St. Paul’s Hmong Museum, leads the quest for a heightened Hmong consciousness.

Today, the St. Paul metro area is home to the largest Hmong population per capita in the entire United States. Not only does it’s urban landscape act as the backdrop for major festivals such as the Minnesota Hmong New Year, but it is also home to the Hmong Museum: the nation’s one and only museum without walls that is devoted to documenting Hmong culture, arts, history, and personal narrative.

But as recently as a decade ago, the Hmong Museum was no more than a fanciful idea – a fuzzy image still forming in the mind’s eye of Mai Nhia Vang, who is both the founder and current board chair. It was when Vang encountered a handwritten manuscript during her time as a student of anthropology that she understood, with the clarity that she had been seeking, her primary goal – to encourage a heightened Hmong consciousness through the acts of collecting, preserving, and archiving as many diverse Hmong stories as possible.

“I wasn’t sure what career I could have with anthropology. In a museum studies class I was taking then, one of our assignments was to visit different museums around town. I chose the special archives at the University of Minnesota, and discovered that they have archives four football fields deep. I was so impressed and surprised to see how carefully they were taking care of old manuscripts and books,” Vang says, reflecting on early experiences that led her to museology.

“I came across a handwritten manuscript by a children’s author, and I remember feeling such a strong connection to this author even though I didn’t know anything about him; through his handwriting, I felt deeply connected to him and that part of history. I reflected on that, and I realized that I didn’t have that kind of connection to my own parents’ lived histories, or to Hmong culture. In the Hmong community, we didn’t have anything like an archive back then – something consistent and totally available for the public to access. So, at that moment, I felt that that the best way to bring our histories and stories to life would be through objects.”

Vang went on to pursue a master’s degree in anthropology, and also gained a certificate in museum studies from the University of Wisconsin-Milwaukee. Returning to the Twin Cities thereafter, she got in touch with various local leaders to get a lay of the land, as well as gauge interest amongst community members in fashioning a repository of all things Hmong. “There was a lot of enthusiasm, but nobody was really taking initiative. I created a page online, and managed to get many supporters all over the country. Everyone I spoke to in the community said they wanted something like a museum, but they didn’t know if there was a way to create that,” says Vang.

Persevering through the worst years of the recession, Vang started working as a curator at the Minnesota Discovery Centre, a few hours north of the Twin Cities. Her time there, she says, gave her the skills and confidence she needed to go deeper into museum work, paying special attention to designing and implementing a project that would recognize and celebrate the intersection between all things Hmong.

“I was driving down once a month to meet with community members and we were having serious conversations about setting up the museum. Once I moved back to the metro area in 2014, things took off. We achieved nonprofit status and the board was formalized. We’ve been continuing on that momentum since then,” remarks Vang, “Now, we have a good amount of following, but we still need to grow more. At this point, we’re outgrowing our volunteer capacity because there’s just so much work involved. Each person on the board has a full-time job, but the museum is a personal project to which we devote our personal effort and resources. It’s our passion.”

Today, the Hmong Museum operates without a brick and mortar space, but its commitment to community is rock-solid. Vang, who works as collections manager with the Minnesota Museum of American Art, has successfully formed partnerships to carry out cultural programming in spaces as varied as libraries, galleries, studios, personal homes, and local Hmong businesses and restaurants. “We try to use community spaces because of their accessibility,” she contends. “Being a museum without walls has really forced us to think about that: how we want to reach the community, and the community to reach us.”

Working in community spaces has worked well so far, but Vang hopes that the Hmong Museum will have a gallery space or store front in the next few years. “I want to find a space where we can host programs. It’s important for us to grow our staff and funding so we can sustain our project, and continue to do this work,” she says.

Already, the Hmong Museum has many unique and creative undertakings to its name. Most recently, they have been conducting Project Paj Ntaub, a monthly three-hour workshop offering instruction on traditional Hmong cross-stitching and applique. Another venture, Unforgotten, is a digital storytelling venture focused on retrieving and recording the narratives of Hmong veterans who fought in the secret guerilla units. A legacy that remains relatively unknown, Vang is interested in making visible this challenging history for people within the community and beyond.

“It’s difficult for veterans to talk about their experiences during the war, but they have been forced to stay undercover for so long that many of them are now ready to share their stories. They don’t necessarily share horrific tales, but they do talk about missions, the impact of their work as soldiers, those they fought with, and their families and friends. They are fighting to be recognized by the U.S. because they don’t receive the kind of respect they would like as veterans, even though Hmong veterans were trained by the CIA and fought alongside Americans,” Vang says, vividly aware of the intergenerational trauma present in the community.

“I don’t want to re-traumatize people by making them share painful stories. For us, the most important thing is that we begin collecting stories that people are willing to share right now. They may not be directly related but are ancillary to the war experience,” she offers. “For example, I’ve heard that if one family had a television and radio set in the refugee camp, everyone would surround them and it would be a community experience. Some of these stories are about joy.”

Vang finds that the stories of Hmong individuals become more and more diverse as she delves deeper. There’s no singular answer to the question of what it means to be a person of Hmong descent in the world today, and Vang is interested in capturing the full spectrum of Hmong identities. She hopes that future generations, exposed to these vibrant, multicolored narratives, will receive opportunities to eke out their own unique senses of Hmong-ness through the artefacts and programming of the Hmong Museum.

As Nigerian novelist, poet, professor, and critic Chinua Achebe famously said, “Until the lions have their own historians, the history of the hunt will always glorify the hunter.” As the woman at the forefront of the Hmong Museum’s quiet revolution, Vang gives the reins to the idiomatic lion. She offers Hmong Americans a historic platform to not only hear their ancestors’ voices, but also to become, in due course, their own storytellers.

“I hope that this museum and the tangible things we begin collecting – stories and objects – can make a future Hmong individual feel connected to themselves, and to their history. If they see a paj ntaub, or listen to the narrative of an elder who fought in the war, they can understand that that is all part of who they are. They can see that they have this rich and complex history,” says Vang. “I want them to think, ‘This is the root that holds me down. This validates who I am as a person.’” 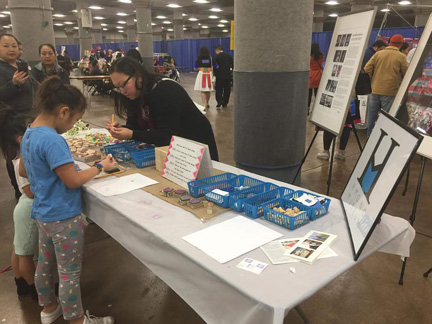 Mai Vang at the Hmong Museum booth at the Minnesota Hmong New Year celebrations at the RiverCentre in St. Paul 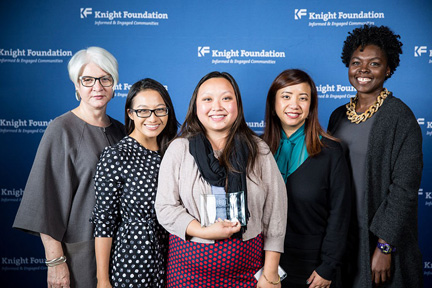