The Letter And The Girl

“What are you doing here?” asked the girl, eyes staring toward the window. Cars drove away in single file like the migrating of birds. The workday was done, and traffic had to be beat. Quite like the girl, her emotions defeated by every wandering thought of the man. It wasn’t a choice she had, but rather a necessity for her mind and its mental functionality. That was how much the man had impacted her. But what did it matter?

“I wanted to see you,” answered the man.

The girl shifted in her seat. She rubbed her palms together under the break room table. Her teeth grinded like the rubbing together of rocks. If she tried hard enough, she may start a fire.

“Why?” asked the girl, finally.

The girl chewed on the inside of her bottom lip. It was the only way to keep her face expressionless and unflinching. She didn’t want to show the man that she still cared. Though it’s only been two weeks since they’d parted, her heart has ached for him, a pain she had never known before, bearable as a hand severed from an arm or a brain melting in hot wax. It was a pain like the tearing of souls from bodies and a vanquishing of spirits from hearts. And when he left, part of her soul, spirit and body did die with him. The worst part was, she’d seen it coming all along. He was polyamorous. But she still let it happen to her all the same.

“What!” The man was aggressive now. Seeking answers, the girl didn’t care to give. The man had his way of life, and so did the girl. And hers was, to give less fawks. At least for now, in this moment, when faced with the man.

The girl met his eyes now, face still unflinching. The mans eyes looked heavy, creases formed under his bottom eyelids and one pronounced indentation between his brow. The man probably had not been sleeping too well these days. But again, no fawks given.

“What do you want?” asked the girl, eyes rolled to the side in declaration of her newfound indifference.

“Can’t we just hang out like we used to…”

“Why not?” The man leaned forward, extended his arm, palm cupping her cheek.

The girl turned her chin the other way.

“What’s wrong with you?” asked the man, arm retracting dejectedly.

“How have your other dates been?” asked the girl in an attempt to redirect the conversation.

“There’s been no other dates.” The man’s face turned grim. Though the girl knew well such was not a testimony of his longing for her. And what it was, the girl had no interest in discovering.

The silence of a thousand broken cries careened between them.

“Let’s go for a Kimchee burger. You haven’t tried that before. I know it.” The man’s face lit up like the flame of a flickering wax candle on Halloween night. The girl knew well this tactic. Buttering her up for moments of giddiness and excitement. The man always did like to live in the moment. The girl hated moments. She just wanted to be genuine, feel genuine, and know that something genuine was on the horizon.

The girl shook her head. Not finding a need to even utter a “no.”

“Then let’s go to the Hmong market. I’ll buy you some Boba. We’ll get some groceries and I’ll cook you parathas. And we can watch a movie.”

The girl shook her head.

“No,” said the girl, indifferent.

“Why!” exclaimed the man. The girl had always told the man not to yell. She wouldn’t tolerate it. Not after her endurance of over two decades worth of shouting chastisement from her parents; needn’t she take it from anyone else.

“Why!” the man said again, this time louder.

“Shut the fawk up!” spoke the girl, and not just in her head. “Just shut your mouth and realize that this is not just about you! It’s not just about what you need or why you need it! This is about me too! What I want and why I want it!”

The man’s eyes filled with tears now, a rare sight for the both of them.

“You can’t just show up to my work and demand things of me! You can’t just text me when you’re lonely! I’m not some love-delivering service! I’ve already told you what I want, and you can’t give it to me. And I’ve respected your ways of polyamory. Just find your next fix and stop this shit!”

The man’s eyes were bloodshot. He rubbed them like a little boy crying after being bullied. The girl’s heart sank to the back of her ribcage. Her belly felt stricken with poison. She wished she hadn’t been so daring.

The man got up from his seat and the legs of his chair squeaked against the tiled break room floor.

The girl’s longing for the man intensified and her tongue with haste sought permission from her brain to speak. But her brain did not concur.

The man made way toward the exit of the break room.

The girl did not say a word.

The man stepped out of the break room.

The girl’s eyes watered, and the tip of her nose stung.

The man’s footsteps sounded quieter and quieter as every second ticked on by.

The man had left a second time. But this time wouldn’t be like the last; this time, the girl knew he’d not return. The girl’s shoulders bounced in distraught rhythm as she fell into a deep and silent cry. And then, she noticed. A piece of folded paper left behind on the opposite side of the table, where the man was sitting. The girl unfolded the note.

You always tell me to believe in wishes. We throw stones into the water, eyes closed, and you ask for me to wish for a desire for the universe to fulfill. I’ve always thought this silly, but I heeded your request anyway. I couldn’t give you true love. I am sorry. But in its place, I have each time wished for you to find a true, committed, monogamous love. And you will in two weeks time. Starting today. Because you believe in it, it will come true. Good bye. 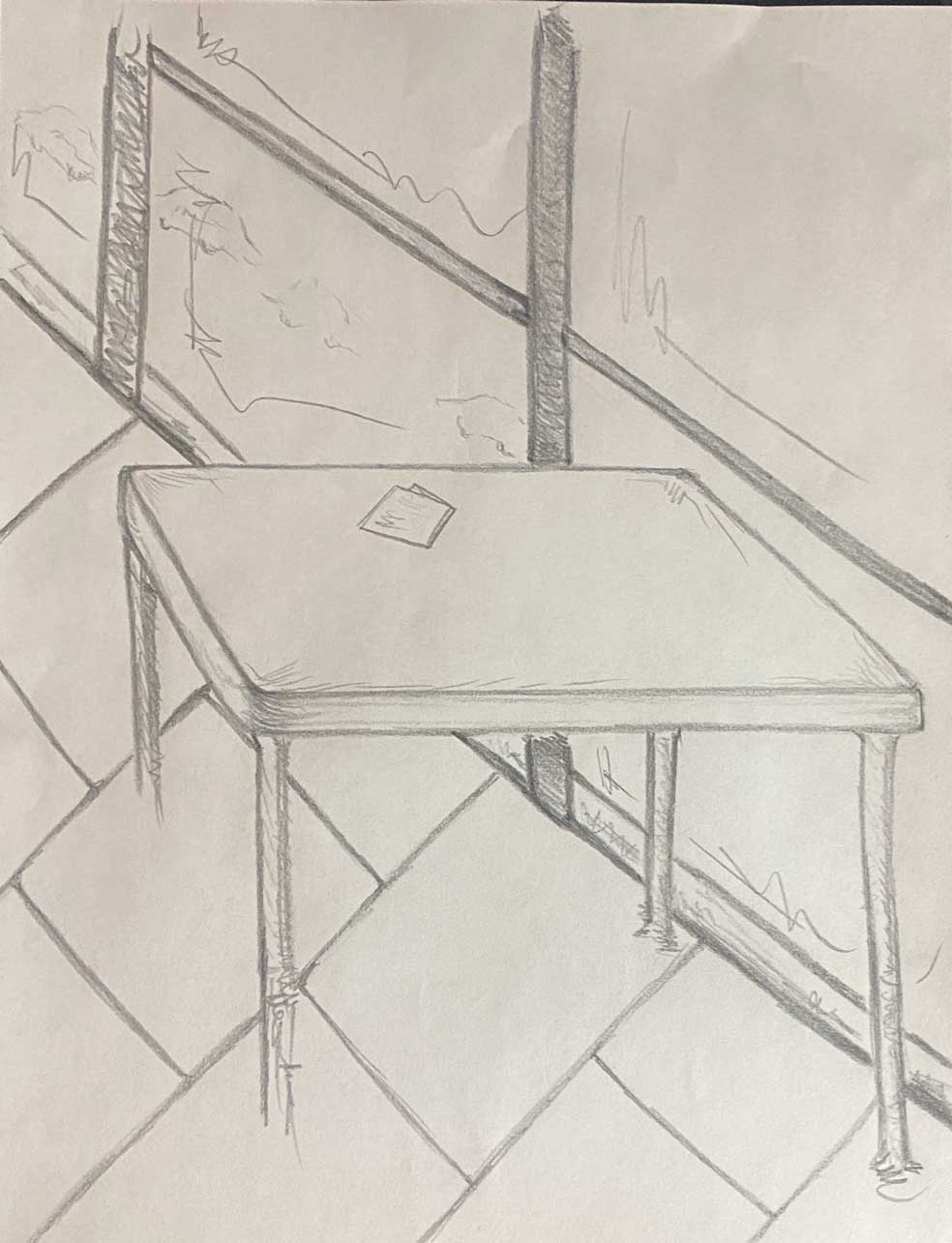 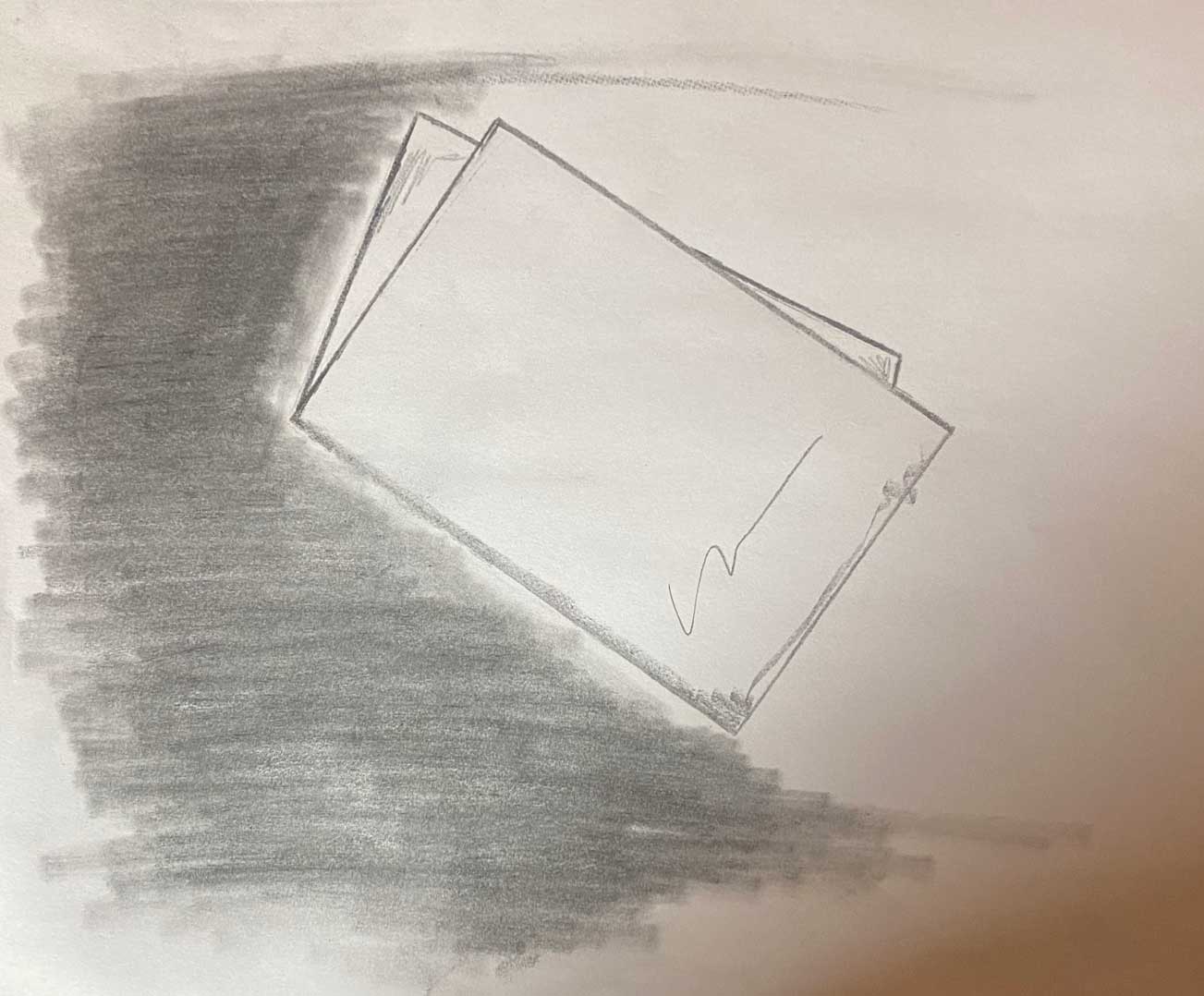