The Impact Of Climate Change On Minnesota State Parks

Climate changes that include “mega” rainfall – plus warmer temperatures – influence the 250,000 acres of land in Minnesota state parks. Floods cause damage to structures and alter plant life; increased heat may drive wildlife to a cooler region.

DNR staff track and adapt to climate change in order to preserve and protect state parks and trails, and they take a long-range view so visitors may enjoy these natural amenities for decades to come.

In the late 1800s, the DNR and other state agencies started to record temperature and precipitation data to identify trends, according to Ed Quinn, the Natural Resource Program Supervisor for State Parks and Trails.

“The past few decades from the 1970s until now show rapid increases in precipitation and temperatures,” he said. “The easiest way to think of it is, here in Minnesota, the climate is getting warmer and wetter.”

“Mega” rainfall in particular changed the park and trail landscapes, Quinn said. A mega rainfall drops at least six inches of rain over 1,000 square miles or more. Gushing rivers of floodwater not only damages infrastructure, but has significant impacts on natural resources, as well.

For example, seeds of invasive plant species are deposited via rushing floodwater into new areas, and populations of fish, aquatic insects and species living in river valleys may be swept away. In some cases, like with fish and aquatic insects, the plant and wildlife may return given enough time. Other outcomes, like the spread of invasive plant seed through floodwater, will require intervention to control.

“The landscape can take a beating: a number of bluffs at Whitewater State Park slumped due to the heavy rain; some bluffs contained rare plants. The plants are returning on their own,” Quinn said, “but the process takes a number of years.”

DNR studies show that since 2000, there has been a 2.5 times increase in rainfall that measured at least four inches in depth. That may not sound like much, but consider these damages and costs:

Rain can cause havoc, but warmer temperatures have an impact, too. Warmer winter temperatures mean few people will engage in certain winter sports like snowmobiling in areas with less snow and shorter winter seasons. As a result, more snowmobile trails may be used as All Terrain Vehicle trails. To avoid flooded campgrounds, some campgrounds have been moved.

One of the more dramatic effects of climate change occurred at Nerstrand Big Woods State Park in southeastern Minnesota starting around 2013, said Neil Slifka, a parks and trails area resource specialist. Precipitation over roughly the past decade, coupled with poorly draining soils, killed upwards of 200 acres of hardwood forest in the park.

“Some of the trees were nearly a couple of hundred years old,” he said. “In some cases, it only took two years or so to kill them.”

That means the need for different tools and an updated strategy, Slifka said. The landscape no longer supports the planting of a big woods.

“We have to adapt our approach to deviate slightly from the historic vision of Parks and Trails,” Slifka added. Instead, the division will create a more novel community more closely aligned with one found in a floodplain or riparian forest. (Riparian areas are lands that occur along watercourses and water bodies. Typical examples include flood plains and streambanks.)

The new community building started in the spring of 2019 when 780 seedlings/saplings of more water tolerant Silver Maple, Cottonwood, Swamp White Oak, Hackberry and American Elm were planted. The seedlings have protective cage-like coverings or are protected by tubes. Parks and Trails staff, working with researchers and students from the University of Minnesota’s Forest Nursery and Laboratory monitor the plantings. In about 80 years, Nerstrand Big Woods State Park could have a renewed mature hardwood forest that is more water resistant.

Meanwhile, nature, a remarkable model for adaptability, marches forward. As large portions of the Nerstrand Big Woods gave way to dead trees, more red headed woodpeckers moved in to build nests in the tree cavities, and feast on insects burrowed in tree trunks, and on acorns, and on hickory nuts. Dead trees in this instance led to more birds. We might consider that an unseen benefit – or silver lining – in an overactive rain cloud.

Certainly, the woodpeckers see it that way.

For more information on Minnesota and climate change, go to this DNR website: www.dnr.state.mn.us/climate/climate_change_info/index.html 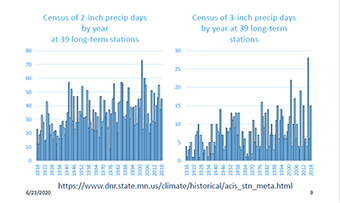 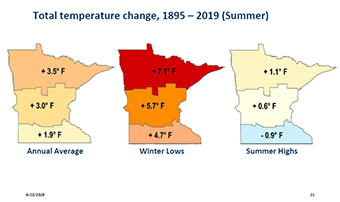