The Bird Song – A Retelling Of A Hmong Folktale – Part 2

The king lifted his hand and the ballroom silenced at once.

“What is your talent, sir?” asked the king to the beggar.

The beggar’s eyes searched the stage. Seven ornamented princesses sat beside the old king. The beggar’s face softened upon beholding the seventh princess, Nkauj Luag Ntxhi, as if he’d known her for some time. His expression was a longing – like a lost man now meeting the love of his life, a desire as strong as the wind, and in it, a sadness, like the lonely hill on which the king’s very palace stood.

“Before I begin,” said the beggar in a hushed tone, “I ask that Princess Luag Ntxhi herself come before me.” There was a sense of dread in his face, like meeting the consequence of a terrible crime that he’d committed. And so was the deep pit inside his stomach as he watched a flurry of confusion bounce off of the one servant to the next, one princess to the next. The crowd murmured behind him. The king’s brow furrowed, yet he motioned for a servant to lead Nkauj Luag Ntxhi down the red velvet steps to sit before the beggar.

Nkauj Luag Ntxhi was as jolly as a five-year old child, watching the crowd giddily and covering her lips shyly at her every coo if a random giggle, as she traced with her fingers the passing of a butterfly that only she could see. The servant kindly walked Nkauj Luag Ntxhi into the finely upholstered chair and placed her wandering arms neatly upon either armrest so as to aid her in giving undivided attention to the beggar’s performance.

The king cleared his throat, anxious. “In your attempt to make Princess Nkauj Luag Ntxhi speak?” asked the king. “What fine talent do you present to us today?”

For a moment, the beggar did not take his eyes off of smiling Nkauj Luag Ntxhi. He pulled out from the underside of his coat, a book of matches containing only one matchstick, held tightly in grip. In his other hand was a broken piece of a once longer wax candle. Palm open before the crowd, the piece of wax stood. Suppressed chuckles and snorts escaped from the crowd. The very image of a beggar inside the royal palace was comical. And so was it more the nature of his meager possessions, not to mention skill. A man of filth with not a bunk to lie on at night and not but a grain of rice to eat is just befitting of such low possessions as a broken piece of wax and an old matchbook with but one matchstick. The beggar did not have self-pity. His stare focused on the young smiling princess, his heart torn. But the beggar held as much intrigue as distraught, as much love as regret. The beggar placed the little piece of wax on the ground before him, inches away from where the princess sat. He plucked the single matchstick from the old book and struck the brass strip of rusty copper and lit the candle.

The beggar folded his hands. “Your majesty,” said the beggar. “I have but one story to tell… In a forest far and vast, there resided a pair of lovebirds. Their love for each other was deeper than the sea and higher than sky. The pair had a love song that they did so often sing into the open forest to call the other back to them. The pair loved each other so dearly, they built their nest at the top of the highest tree of the forest, far from predators and danger. They promised to love each other. They planned their future together from where to nest to the number of babies they would have together. They talked about how they each would take turns guarding the eggs in the nest while the other searched for food to feed the family.

When the sun rose just above the mountain line, the father understood it was his turn to fly off in search for worms to feed the mother and their soon baby birds. The female would rest in the nest and warm the eggs with love and care. When the sun rose higher, the mother would sing their birdsong from the bottom of her heart in order to guide the father back to the nest safely.”

Something was happening. For a minute, the beggar’s raspy voice was not the only sound resonating in the ballroom. A shocking surprise was the sound of young Nkauj Luag Ntxhi’s distressed whimpering. She focused on the little ball of light before her foot, its gentle flame dancing lightly in the open air.

But the beggar continued… “When the sun was overhead and the leaves of their very home was bathed in warmth, the mother understood that it was her turn to fly off into the open wild in search of insects to feed the father and their baby birds. The father would sing their birdsong from the depths of his soul to guide the mother back safely to the nest.”

“Stop!” exclaimed the eldest princess, Nkauj Hli, her eyes widening at the attention of her king father. The rest of the six princesses were grief-stricken at the sight of their beloved mute sister Nkauj Luag Ntxhi in distress. “Father, do something.” Nkauj Luag Ntxhi’s lips trembled. Her affect now completely devoid of what was her giddy and childlike nature. Thick streams of tears rolled down her cheeks and she did nothing to clean them, her hands planted still and obediently on the armrest. “Father, please, what is this man doing to Nkauj Luag Ntxhi?” The king put up a hand. He stroked his silver whiskers thoughtfully, seemingly paying no mind to the request of the distressed older princess.

The beggar continued. “The pair of lovebirds promised to live in this way, each of them taking turns leaving the nest for food in order to raise their family. The day should come when their baby birds are of size and strength and can leave the nest. On this day, the love pair will watch proudly as their young made way into the world following in their very own footsteps. That shall be a life well lived.

But one day, winds were strong. The love pair did not venture out for a meal, but both stayed put. And as unexpected as the winds themselves in the middle of summer, fate seemed against the love pair. A fire broke out in the woods.”

The beggar began to cry. “Though the lovebirds’ nest was on safe from predators on the top of the tallest tree, no height could spare them from the destruction of a growing forest fire.”

“And women, they are so cruel. Even after a life of love, a sacred vow to their loved one to surely live together and protect one another, when the forest but catches on fire and even the tallest of trees cannot escape devastation, woman though deems themselves worthy of escape. When fired raged and their nest collapsed onto the ground, it was the mother bird who flew off into the sky, rescuing herself, saving only herself, leaving the father bird and their young to die alone.”

Like the end of an enchantment, the little ball of light on the piece of wax blew out. Nkauj Luag Nxthi’s cries fumed. She roared loudly like a weeping mother over her young, its sound forceful like lightning. The room gasped.

The beggar’s face did not change. His deep devotion for the mute princess was fixed firmly in his eyes. Each spill of a tear expressed his sorrow in his wrongdoing.

Nkauj Luag Ntxhi burst into a loud cry, like a child waking up from a much-needed sleep. Her eyes were bloodshot, cheeks wet down to her chin. Her hands were balled into fists, beating down at either armrest. “Don’t you dare sit there and cry,” uttered the young princess for the first time, eyes narrowed and glaring at the pitiful beggar. “Don’t you dare sit there and tell of the story of which is untrue!” The room held their breath. The princesses huddled close together in shock. The king stroked his silver whiskers curiously.

For once, Princess Nkauj Luag Ntxhi showed wrath. Resentment. Fury. Laughter seemed no longer her make. “It was you!” shouted the princess. “You COWARD! It was YOU who flew away when fire enraged,” said the princess through gritted teeth. “YOU departed the nest and left ME to die with our young!” she wailed.

The beggar’s face softened. He too began to wail.

The ballroom was in shock. All the princesses were no in tears, all from surprise, happiness, and much confusion. Servants rushed to their console. The king stroked his silver whiskers, decidedly. 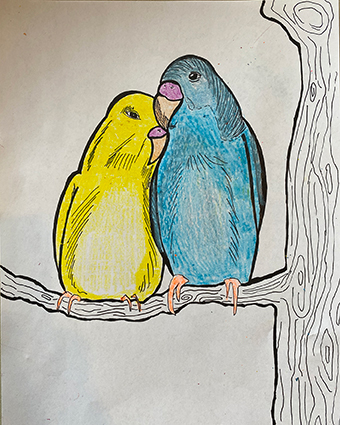 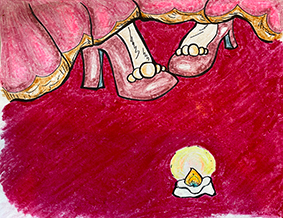