The Bird Song – A Retelling Of A Hmong Folktale – Part 1

The princesses were the King’s everything. He loved them more than all of his riches combined for each of them possessed a beautiful characteristic of his late wife, his forever Queen. His love for her is strong. Following her untimely death after giving birth to their seventh and final daughter Nkauj Luag Ntxhi, he had heart for no other woman. He loved only her so dearly that on her deathbed, he swore two promises: 1) He will never take another wife, and 2) He will look after each of their girls until they are wedded and well before he follows her to the grave.

Sixteen years has passed following his queen’s death. The King was starting to grow weary. So long a time has passed when he last felt his forever Queen’s warm embrace. But this wasn’t the only thing plaguing his mind. What was more troubling was the status of his princesses, single maidens. His days were numbered, yet not one of his daughters was wed. This disheartened the King.

“Dear daughters,” the King would say, “please do not make me lose face when the time should come for me to meet your mother, our Queen, at the grave. She will surely scorn me, my princesses.”

“My dear Nkauj Hli,” he asked. “Why haven’t you wed? Are there no bachelors in this kingdom that suits your interest?”

The eldest princess did not respond.

“You are the oldest,” the King continued, “Once you wed, your younger sisters will follow you and wed also. Then and only then, I will be free of my promise to your mother, our Queen,” he pleaded.

The King’s face drooped sadly. It was true. As fate may have it, Nkauj Luag Ntxhi’s name was as a self-fulfilling prophecy for she only knew how to smile and laugh and could not speak a word. She was mute since birth. Many shamans have come and gone with their gong and split bullhorn to read the fate of this young princess, but none had an answer. The King took this as the result of the young princess having experienced trauma as an infant after losing her mother. And for that reason, the King showed her the utmost love and care.

“What do you fear, my dear?” asked the King.

The King’s brows sagged deeper than his frown. “My dear Nkauj Hli, you mustn’t worry about our Nkauj Luag Nxthi. She does not have to wed like the rest of you. She is a mute girl, but she has a whole palace of servants to care for her.” Plump teardrops rolled down either side of his wrinkly eyes. “When I pass, Nkauj Luag Ntxhi will have the whole palace to look after her.”

“Father,” said Nkauj Hli. “I am the oldest princess of your blood. I will not allow that fate for Luag Ntxhi. Every maiden, even if blind, deaf or mute, still wishes to have a husband and bear offspring, my father King. Luag Ntxhi may not speak, but that gives us no right to decide her fate.”

The King dried his eyes. ”You’re right,” he said. He walked away sadly to retire for the night. But even night was not kind to him. The King could not sleep a wink. He lay awake in his bed, thinking about this dire situation.

In the morning, the King called upon the eldest princess again. Stroking his thin silver whiskers thoughtfully, he spoke, “My dear Nkauj Hli, all seven of you will surely wed,” he spoke with confidence. “I have just the idea.”

Straight away, he instructed palace servants to deliver the royal message to the kingdom and surrounding townships, anywhere and everywhere that Hmong people dwelled. The proclamation was such that any fine man in the area, should they desire a princess as their bride, be they a bachelor or a married man, shall have an equal chance of winning such a right by attending the royal gala that was to be held at the palace. However, such a prize does not come without a challenge. Per the King’s humble request, the fine man must achieve one task – they must make Nkauj Luag Ntxhi, the youngest of the princesses, speak. Should the fine man succeed, he may have his choice of any one of the princesses in marriage.

The palace erupted with shock and confusion when the proclamation was announced. “Once my dear Luag Ntxhi speaks,” explained the King, “then all of my daughters will be at ease to marry. And once Luag Ntxhi speaks, she too will have prospects a plenty.”

In the next few days, the kingdom flooded with far-comers and local visitors. Men of all ages arrived. Some were mature, others were only boys accompanied by their poor mothers. There were toothless men, bald men, overweight men. All were dressed in their finest and ready to perform their trick to make the young princess talk.

Man after man, boy after boy, the poor, the rich, the well, the sick, all came through with their attempts. Jokes were told to no avail. Tricks were played to no effect. Riddles recited to no use. Acts performed with no outcome.

The King grew tired and exhausted. He wanted to give up, but couldn’t possibly do so for he believed this must work. The evening carried on dreadfully, like a flickering flame in a storm. After a long day, the King decided to retire and close the doors. Just then, a low voice pleaded from the crack of the wooden doors.

“I am here. Please give me a chance and I will surely make the youngest princess speak.”

The King’s eyes widened. He motioned for the doors to open. The crowd parted and made way for the new visitor. A heavy silence filled the vast ballroom. The strange man’s footsteps echoed through the ceiling as he strolled down. Tipping what was the hood of his raincoat, his eyes came to view. The room gasped as one, all doubting in unison the strange man’s skill and ability to handle the task. His coat slumped off his shoulders. His hair was disheveled and his face filthy.

“A beggar!” a voice exclaimed. The room erupted in laughter. But the strange man did not flinch. He only grinned.

Stay tuned for Part 2 in the next issue of Hmong Times. 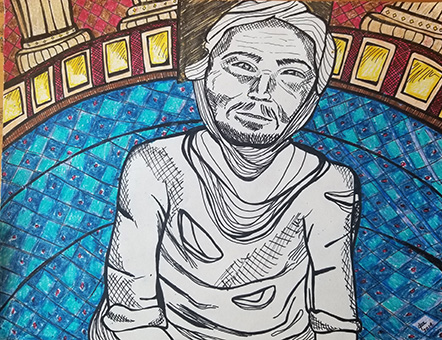