New research highlights important strategies to lift people out of poverty. But nonprofit expert asks, “Are they enough?”

Well, they passed a law in ’64
To give those who ain’t got a little more
But it only goes so far
Because the law don’t change another’s mind
When all it sees at the hiring time
Is the line on the color bar

– Bruce Hornsby and the Range, “The Way it Is”

Earlier this year, the U.S. Partnership on Mobility from Poverty published a report titled, Restoring the American Dream: What Would it Take to Dramatically Increase Mobility from Poverty? Funded by the Bill and Melinda Gates Foundation and supported by the Washington, D.C. based Urban Institute, this partnership set out to design and implement a series of comprehensive strategies to support current best practices and discover new and innovative approaches to help lift people out of poverty.

The partnership worked directly with community residents living in poverty, public agencies, policymakers, nonprofit organizations, scholars, activists, journalists, social entrepreneurs, and members of the business and faith communities in developing five primary strategies, which are to:

With regard to changing the narrative, the partnership cited three of the most common and erroneous accounts in our discourse on poverty, that “people in poverty have no one to blame but themselves; people in poverty are helpless victims; and the rare, spectacular ‘rags-to-riches’ stories prove that the American dream is still achievable.”

The partnerships Chair, David T. Ellwood and its Executive Director Nisha G. Patel, contend that in order to successfully deflect and debunk these myths we must “humanize” the poor, highlight and confront the systematic realities that help to create and perpetuate poverty, and work directly with others who can refashion and disseminate a new narrative. All great ideas as are the other four strategies that they lay out in this report.

The report also speaks directly to several key factors related to poverty and opportunity in America including the arguments that:

Concerning the concept that “place matters,” the partnership employs the research of Stanford University economist Raj Chetty, who reveals that those living in poverty in cities with dynamic economies (e.g. Boston, Washington, D.C., San Francisco, and Seattle) are significantly more likely to advance financially than those residing in America’s rust belt or southern cities.

Steve Dubb, senior editor and columnist for the Nonprofit Quarterly believes that the partnership’s approach is sensible and promising. Nonetheless, he asks the critical question, “Are they enough?” Adding that, “It is notable, though, what strategies are not included.” Dubb notes that there is a sole reference to unions, which have “historically been economic ladders,” and absolutely no mention of co-ops another “promising strategy.” And, in spite of the report’s emphasis on employment, Dubb addresses the absence of any discussion regarding inequities in America’s healthcare and education systems, which are equally as important.

In fairness, as Dubb concedes, the partnership is still working to develop additional ideas and strategies, which will “hopefully fill in some of the gaps.” But still, while all of these ideas may have the potential to impact change, we still cannot ignore the historical legacy of both individual and institutionalized racism, which recording artist Bruce Hornsby pointed out in his 1986 number one song “The Way it Is” (referenced above).

And this is why it is paramount that we continue the fight to dismantle the structural forces that cause poverty and reinforce racial disparity while providing equitable access for all Americans to quality education, living wage employment, and adequate healthcare among other resources. 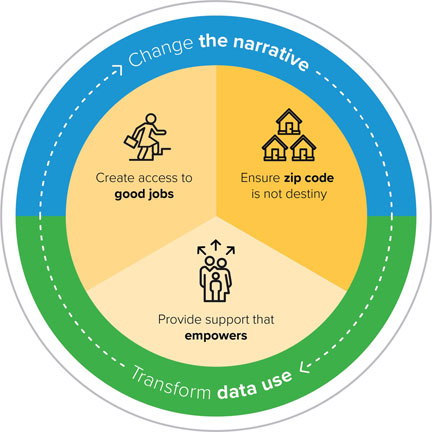 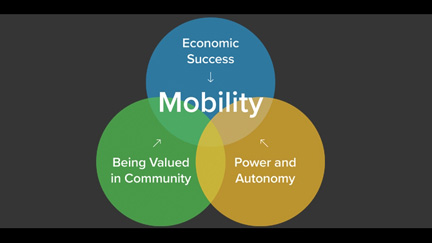