Not long ago and while off the clock, Mike Dunker took a hike. While outside, he was recognized by a park visitor who remembered him from a naturalist program he led. The woman bubbled with good will and happy memories and Mike thought, that’s the best part of my job — knowing that a visitor understood what was conveyed and gained a new perspective.

It happens every day in state parks and on state trails throughout Minnesota – the combination of park visitors with questions and park naturalists with answers. Parks and Trails naturalists serve the public as teachers and interpreters, while at the same time, working to conserve and protect public land.

Add to that their ability to creatively solve a vast range of problems, like this one: how to put together the best exhibits possible at the new Wild River State Park Visitor Center. Mike worked with Megan Johnsen, a former Park and Trails naturalist and current exhibit specialist. One of their first challenges was to develop a theme for the project that encompassed the park’s ecosystems, geography, and history.

Wild River State Park is about the push and pull of eco systems, Mike said. Its river, forests and prairies create a cohesive environment. Droughts and floods are part of the natural process. The visitor center’s new interactive exhibits will tell the story of the park’s ecological diversity for decades into the future, he said.

Mike is interested in another aspect of diversity, as well. Exhibits, signs, all attractions designed for visitors are most effective when they tell the whole story of a place, he said. “You can go through some visitor centers and only see one side of the story,” he said. “If you bring other stories and people in, it gives a fuller view of the park.”

His own background shows a kind of diversity. For nearly a decade, Mike worked at every aspect of small newspaper publication in Cottonwood County. He could make a living as a journalist, but his passion was for the outdoors. So, Mike took a job as a naturalist who conducted prairie ecology bus tours. From those starting points he became a seasonal naturalist at Forestville/Mystery Cave State Park, and then a full-time Mystery Cave naturalist who gave cave tours.

The jobs are rewarding but demanding, Mike said. There’s a tendency to overdo it yet feel that not enough was done for park visitors.

“We are our own worst critics,” he said. “We feel like we’re running out of time yet want to make contact with everyone all the time and it’s tough to hold back on that. What I’ve learned is how important balance is. If I can help others see that, then I have filled an important role in this position.”

Education: BS in Ecology with a minor in Parks, Recreation and Leisure Services

Most difficult time on the job: During COVID 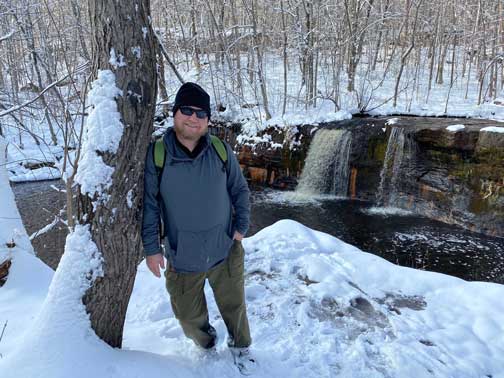