The dial rang. It rang again. There was no answer.

It was already 7:30 in the morning. Her parents were usually up by now. Gao reluctantly ended the call. A warm stream of heated air rode up her leg, warming her calves nicely. She had both her feet planted on the bathroom’s furnace vent near the edge of the tub. This was one of her guilty pleasures – sitting on the toilet, resting her legs above the heater vent, while she passed her bowels. It was the most efficient thing, productive-pooping. Last night, her sister had instructed her to call her dad back. “Make some time for dad tomorrow,” she had said. What could her dad possibly want from her so urgently? It was Saturday, the weekend, and so she knew he was pretty chill on the weekends.

“Where were you last night?” her mother said.

“What do you mean?” she responded. “I was studying; I told you that.”

“Stop lying!” Her words cut like a serrated knife on zucchini.

A million thoughts rushed into her head. What the heck had happened last night at home? “Why do you think I lied to you?” Gao said.

“Mom!” Gao tried to calm. “What makes you think that I lied to you?”

IT’S MY LIFE, NOT YOURS!

DON’T TRY TO CONTROL ME!

If only, if only she was brave enough to speak those words. The things her mom would say, “Don’t think you’re American and can talk to me that way. Look at your hair, is it blonde? Look at your skin color, is it white? Just because I worked and sent you to school and fed you to be as fat as you are, don’t think that now you have authority over me. I’m your mother!”

Her mom would have leverage over her. She couldn’t give her mom that pleasure.

“That’s not true,” Gao said instead. “I was just studying like I told you.”

“You were studying until 11 at night? Why the heck do you have so much homework? I bet no other kids have homework like you do,” her mom said in a disbelieving tone.

Gao gave up. She inhaled a deep breath, held it, then exhaled. She did this as quietly as possible so as not to allow the sound of her respiration to amplify over the phone. “Let me talk to dad.”

There was a quite pause. Then, light shuffling and background murmurs sounded distantly in her ear.

“Hello?” His voice was stern. Heated. He did not sound happy.

“What happened, dad?” Gao said in her softest tone.

“Tell you what?” She was genuinely curious. Last she knew, she hadn’t let him down since her last boyfriend. He was Hispanic, not Hmong. And her dad hated seeing them together. When they broke up, he rejoiced. And now, what could she have done to anger him this much?

“Look on your arm, you female dog! YOU know what you did!” He didn’t spare her. He never spared her. Especially when he got mad.

Gao had guessed it prior to the call. It probably was her tattoo that he’d found out about. She knew that he’d find out sooner or later, but she’d hoped it’d be later. The tat was still fresh and it burned with pain every time she rotated her arm. But nothing could compare to the pain that she felt at this moment.

“You think you’re so big now and so grown up and you are an American, you can do what you want!” her dad accused. None of this was true, of course. She’d gotten the tattoo because she wanted it. Not as an act of defiance. She would never challenge her dad; there was no use.

“No, that’s not true, dad.” Her heart was racing, her lips trembling. Thick streams of tears rolled down her cheeks, but she bit her tongue to keep quiet her quivering breath.

“Stop your lying!” he said. “I’ve never seen a kid as bad as you. I birth you and raised you to be as large and fat as you are! And all you know how to do is hurt me! You have disgraced me! Don’t think that you are so cool with ink all over your body. Your uncles, don’t think they will be fond of you going forward! People will see you and you will be worst than trash in their eyes. You are lower than trash! You are nothing but a bitch, a hooker! Good daughters don’t act like you!”

Yelps escaped her shuddering lips as she sobbed, still sitting comfortable on the toilet seat. Her cries were audible now, but what would she do. Her dad was yelling at her; he couldn’t expect her to just sit there and take this. She had to cry. That wasn’t a crime.

“DO YOU HEAR ME!” he said. “Don’t face me again unless you remove that filth off from your skin!”

“DO YOU HEAR ME?” he repeated. “If you want me in your life, I better not see that on your arm.”

Her mind was blurred. So was her vision. “Okay,” she said.

What had just happened? How had he found out?

In a moment of a few seconds, she took a deep breath, held it, and exhaled. That exercise always worked to calm her. She hadn’t recognized when her dad had ended the call, but it didn’t matter to her. He had his beliefs and she had hers. He was allowed to feel the way he feels, and so she.

She let her bowel pass and then wiped her bum and face clean before getting up to wash her hands. She stared at her reflection in the bathroom mirror. The side of her arm where the tattoo was placed was a little swollen. Gao rubbed her fingers over the streaks of green and red. The tattoo featured a Hmong embroidery stitch pattern of houses and mountains intricately designed into a triangular shape. In one house, there stood nine mountains, one for each member of her family. But there was one mountain that stood above all the rest. That one was her, and she felt fine about it. 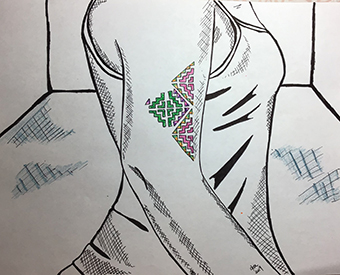 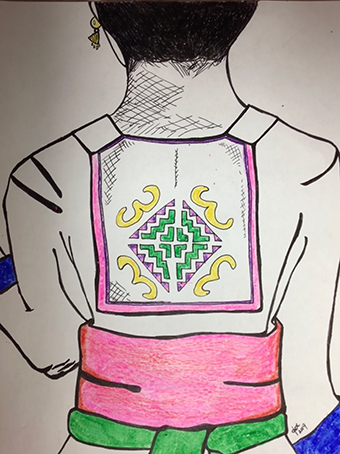