Sunisa Lee Is A Symbol Of Freedom For The Hmong People 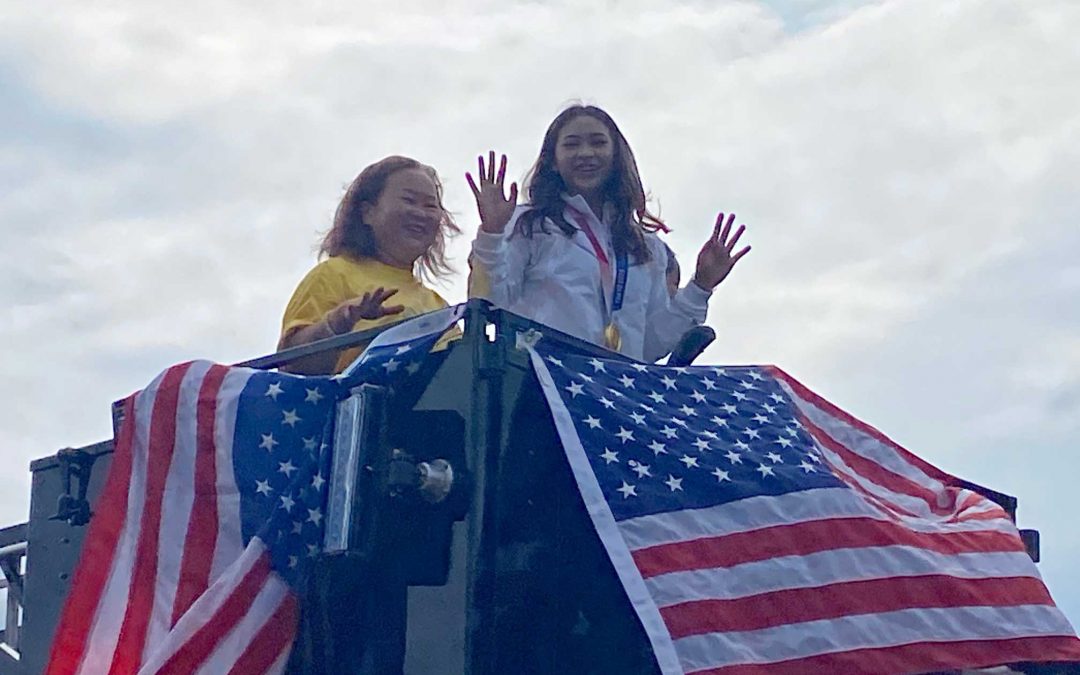 Sunisa Lee Is A Symbol Of Freedom For The Hmong People

In the 1960s, when CIA officer Bill Lair approached his friend Brigadier General (then Colonel) Harry C. Aderholt, commander of the 1st Air Commando Wing at Hurlburt Field in Florida, saying, “Do you think the [Hmong] can be recruited to learn how to fly single-engine planes in combat?”

The response was, “Aw hell, those people [the Hmong] never saw anything more than the ass end of a buffalo. They can’t fly.”

But Lair and Aderholt kept asking and pushing. Soon the response became, “OK. Send us a couple of those guys. They won’t make it, we’ll get rid of ‘em, and you will all shut up.”

And when Lair would ask General Vang Pao the same question, his response was always the same, “Oh sure! No problem. They [the Hmong] can do anything.”1

And sure enough, despite the doubt of U.S. Air Force, Hmong men learned to fly like naturals. “They sent, received, and decoded radio messages and repaired radios, translated for U.S. personnel who interrogated prisoners, guided bombers to their targets, monitored and reported enemy activities, and carried out a number of other functions few (including the Hmong themselves) ever expected them to perform at all, let alone well.”

Throughout history, the Hmong have continued to be undermined, oppressed, and silenced. Well before 3000 BC, the Hmong settled in northern central China near the bend of the Yellow River and were ruled by their king Chih Yu. There, they lived in a united assembly of nine clans known as Jui Li or “The Nine Heavenly Groups” – (Cuaj Lig Ntuj).2 When the Han Chinese resettled in nearby areas, war and the fight for the land and power ensued resulting in the capture and execution the Hmong King in 2698 BC.2 From then on, the Cuaj Lig Ntuj union was broken and never to be intact again.

The Hmong migrated south in search of their freedom, though the Chinese continued to persecute them and force them into assimilation. In 1405 AD, the first group of Hmong was captured and segregated into two groups termed “The Cooked” and “The Raw,” the former being those who either had ‘been assimilated, defeated in warfare, or voluntarily assimilated to the dominant culture and lived close to the Han Chinese.’2 The Raw were those unwilling to alter who they were. Yet, those deemed ‘cooked’ continued to be treated as slaves and shielded against Han Chinese kin in combat.2 While the ‘uncooked’ lived far away from the general civilization, usually at higher altitudes, and paid no taxes.

In the 1800s, the opium trade led the Hmong to settle in the lush and uninhabited mountains of eastern Laos, in Xieng Khouang Province in a village called Nong Het. These previously uninhabited mountains were densely forested and contained many tigers which presented as a threat for the newly settled Hmong people. But that wasn’t their only concern. As was the case in previous centuries, wherever the Hmong settled, they were not wanted. The Hmong people of Laos remained at high altitudes, sometimes above 3,000 feet and sometimes at 5,000 feet,3 due to the dominant race’s overall unacceptance of them. Yet the Hmong did not see this migratory lifestyle as a burden.3 To them, their feet were not tied to the land. “If mistreated or a government oppressed them, they could always vote with their feet.”3 But things were not so easy following the Secret War.

After aiding the United States CIA force in fighting the communists of Laos, the U.S. withdrew leaving the Hmong to face mass genocide by the Pathet Lao. Many Hmong families crossed the borders of Laos through the Mekong River into Thailand to seek refuge. Some of those families resettled in countries including the U.S., Canada, France, and Australia.

The Hmong are a people who has always been in search of their freedom. Authenticity is most important to the Hmong. Though they’ve faced oppression and maltreatment for centuries and again, the Hmong learned to adapt and have ultimately preserved their culture, values, and beliefs.

Sunisa Lee (Suni) is among one of these Hmong refugee descendants that carries within her blood and DNA centuries of generational trauma and oppression. In more recent times, (during her parents’ and grandparents’ generation) when Hmong immigrants newly resettled in the United States, many families spoke little to no English and had few to no years of formal education. It was not only a foreign land, culture, and language, the Hmong’s old lifestyle of farming was no longer readily applicable. Racial inequity would also greet these Hmong immigrants, but in their hearts, this was no matter worth doubting. The Hmong have undergone centuries of oppression, subjugation, and persecution. Whether known to them or not at the time, this resettlement would prove as a mere transitionary period for the Hmong people into a life of opportunity and thus freedom.

Suni Lee, a St. Paul native Hmong-American, is an example of that freedom. Suni Lee didn’t come from a lavish or privileged background. On the contrary, Suni’s upbringing and socio-economic background was one like many Hmong families today. But Suni didn’t just accept her fate and leave it at that. She pushed. Her father John Lee was influenced to build her a balance beam out of 2X4s so that she could practice. And Suni practiced often, through sacrifice of family vacations and other fun activities, according to her mother, Yeev Thoj. “Suni is a natural,” her father John also shares. But what makes Suni truly different is her inner strength and resolve – Suni doesn’t give up.  Suni’s tremendous Olympic success, taking the Gold medal in the women’s individual all-around event of the gymnastics competition, a bronze medal in the uneven bars competition and a silver as part of team USA in the team competition, speaks volumes that spans over centuries. Suni has shown the Hmong community that, yes, Hmong people have undergone tremendous trauma and oppression but that does not have to define us.

Through her tireless training and her courage in following her heart, Suni has broken the mold of the ancient Hmong trend of “picking up and leaving the scene when oppression creeps in.” Suni changes that narrative by showing all Hmong people that they can fight back.

Perhaps that is the reason why so many Hmong people, young, mature, and old alike, find strength, courage, and resilience in Suni’s mere presence.

On August 8, 2021, at Sunisa Lee’s parade on White Bear Avenue in St. Paul, many attendees were of Hmong descent. People young and old wore traditional Hmong attire. Others wore “TEAM SUNI” t-shirts to support her. But there was one thing that every single attendee had in common. That was, a big wide smile on their faces as the Suni Lee firetruck float glided by. All people all around shouted her name with pride, an energy only understood had one been present.

Sunisa Lee is a symbol of freedom for the Hmong people. Her success is of no coincidence, but a result of tireless dedication and sacrifice along with generations of strength and resilience instilled into one girl who decided to use it for good.

And just like that, General Vang Pao’s words are echoed, “Oh sure! No problem. They [the Hmong] can do anything.”1 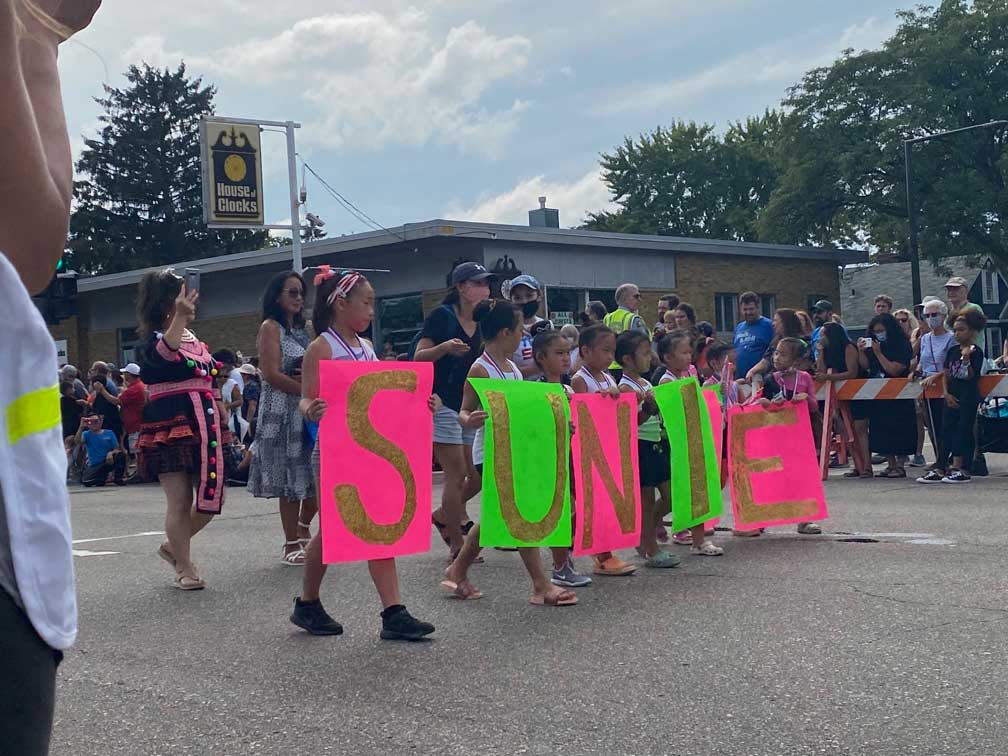 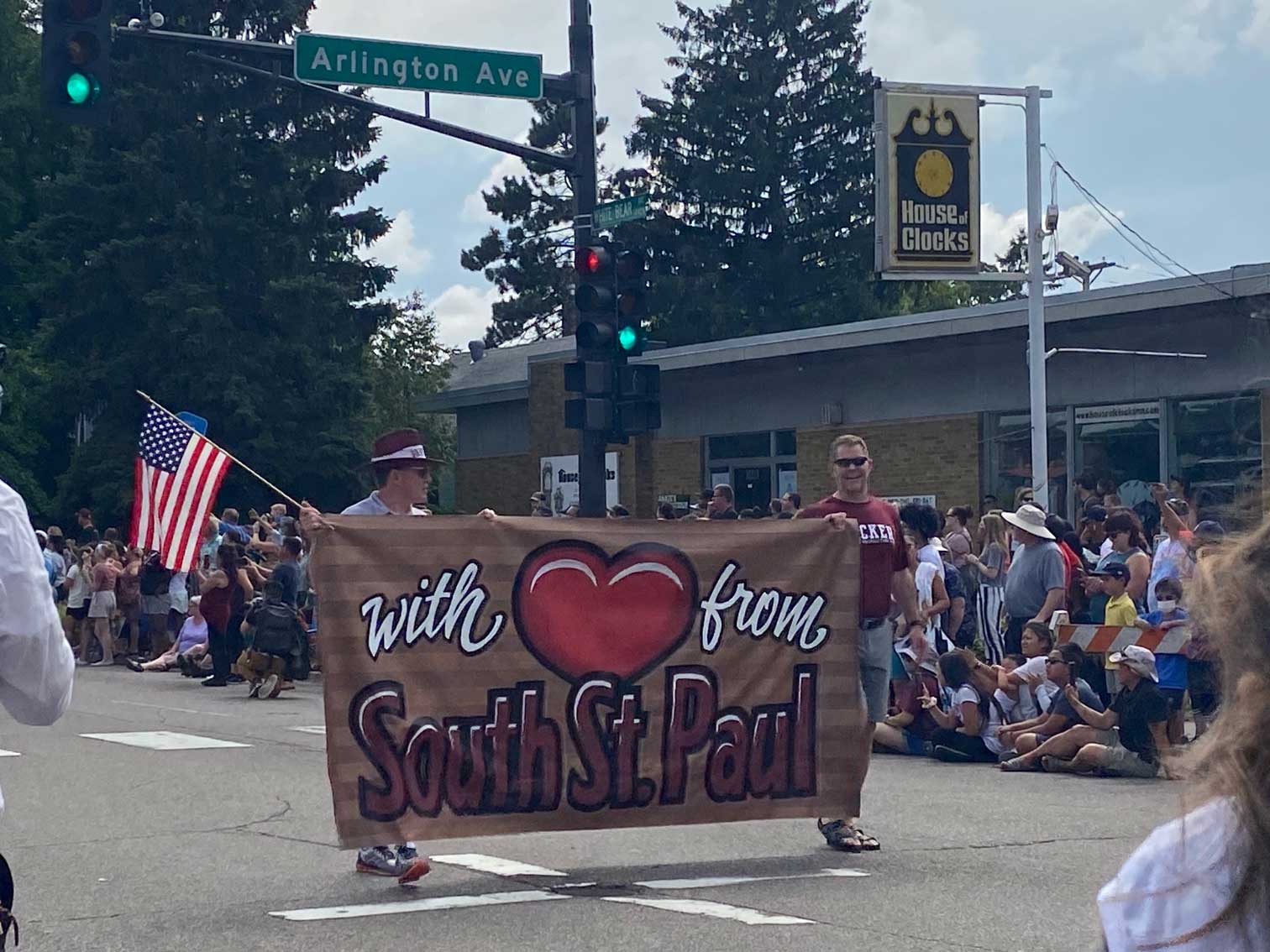 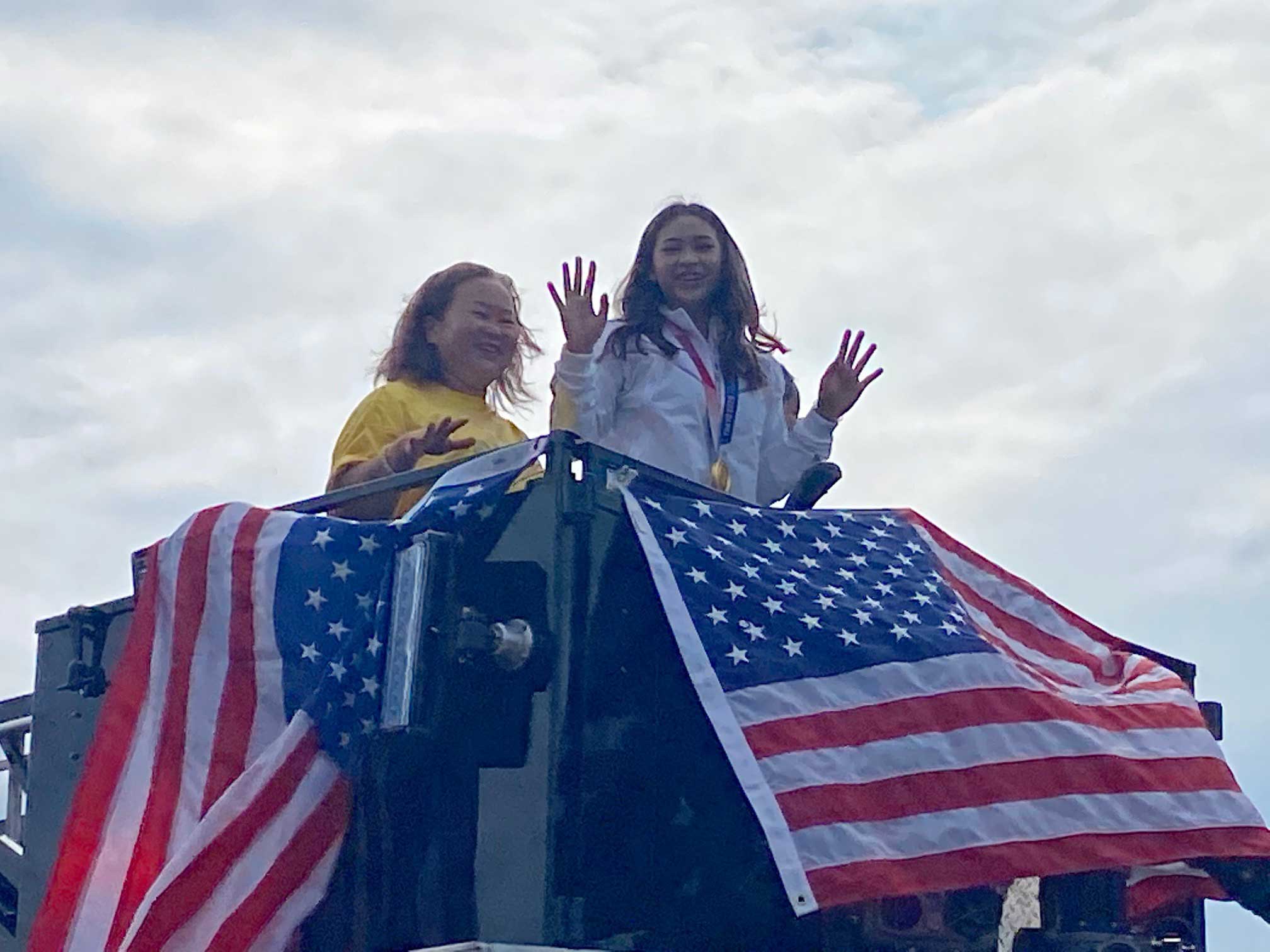