The humble tennis courts of St. Paul are not often thought of as a breeding ground for premier tennis talent, but such is the story of Vunnisa Vu. Vunnisa, a resident of Roseville and attendee of Roseville Middle School, found her way into tennis when at 5 years old, she began taking lessons through Saint Paul Urban Tennis (also known as SPUT by the community). Song Thao, the head coach at that site, immediately noticed Vunnisa’s potential. He states, “It was easy to work with Vunnisa because she was like glue. Every coaching point sticks to her right away.” From there, the relationship would continue to grow and provide space for Vunnisa to become one of the top junior tennis players in the nation.

Soon into her tennis career with the mentoring and coaching of Song as well as Lee Thao, another Saint Paul Urban Tennis coach, Vunnisa was soon making her way into the top levels of competition that tennis has to offer. At age 10, she along with other 12 and under SPUT participants, won their age division for the regional Junior Team Tennis Tournament and would go on to represent Saint Paul Urban Tennis at nationals. At that tournament, Vunnisa was excited and nervous. There, she would play against a small 9-year old player from Hawaii and lose that match. Not one to be deterred, Vunnisa recalls, “I lost, but it made me want to work harder because she was younger than me.”

Competing at the top levels of the sport did not come without growing pains as Vunnisa and her family had to scrap together playing opportunities. As competition became more advanced, Vunnisa would need coaching and court time to raise her game to the next level. Thankfully, organizations like Saint Paul Urban Tennis and InnerCity Tennis (a fellow tennis and youth development non-profit in Minneapolis) were able to provide her and countless other youth from across the city opportunities to access the court time and coaching needed to compete at the highest levels. That, and the help of a little creative thinking. Vunnisa and her father, Kong Pheng Vu, would supplement her time on court with shadow stroking and technique development inside the racquetball courts of an area YMCA.

Vunnisa once again represented SPUT on a national stage at the U.S. Open’s Excellence Cup September 6-8. This tournament, which invites 24 of the nation’s top youth, gives young players like Vunnisa the opportunity experience tennis at its highest levels and see what potentially lies in store on their tennis journey. Vunnisa was not alone on this journey, she went to New York with her long time coach and mentor, Song Thao. Song, who has had the opportunity to coach Vunnisa at various points throughout their 8 year history, has a special story of his own to tell. Now the Executive Director of Saint Paul Urban Tennis, Song began his journey in a similar fashion to Vunnisa, learning tennis on the Harding High School tennis courts in St. Paul. Song found tennis through the help of his mentor, Koua Yang, and was soon coaching for Saint Paul Urban Tennis and developing into an elite player in his own right. Song would soon become a top level varsity player in high school and go on to join one of the top college programs in the country at Gustavus Adolphus College.

Vunnisa and Song went to Flushing Meadows, New York, home of the U.S. Open (tennis’ largest stage), where they had the opportunity to add another chapter to their story when Vunnisa played against other top level juniors. As their lives evolve, with Song taking on more responsibilities as executive director of SPUT, they are cherishing what could be their last time on the courts as player and coach.

In November, Vunissa will add yet another experience to her already impressive tennis resume, when she again represents Saint Paul Urban Tennis at the National Junior Team Tennis tournament in Florida, this time in the 14 and under group. Joining her on this adventure are Isaiah Eby, Dylan Pham, Brandon Pham, Emmeline Wang, Ashley Nguyen, and Brittney Nguyen, who also play for Saint Paul Urban Tennis. “This is an opportunity to bring our strongest players to even more difficult competition. In order for them to continue to excel, these kinds of opportunities need to be taken advantage of,” says Brandon Kuether, a Program Manager at Saint Paul Urban Tennis. This opportunity does not come without cost, as the team needs community support to fund their trip to the national tournament.

From St. Paul to New York and everywhere in between, the road to the sports’ biggest stages has shown what is possible when talent, passion, mentorship, opportunity, and community converge. Organizations like Saint Paul Urban Tennis make space for players like Vunnisa to reach their potential, coaches like Song to grow in leadership, and countless other players to experience the joys, lessons, and opportunities that tennis provides.

Find out how you can support the efforts of Saint Paul Urban Tennis at urbantennis.org. 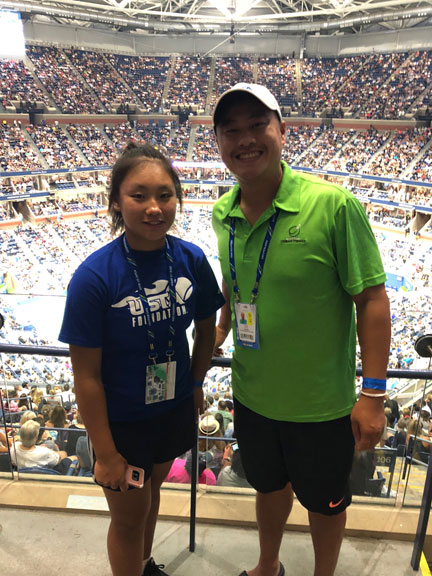