Editor’s note: Kerry Xiong has written a series of short stories that will be published in the Hmong Times newspaper over the next several issues. The first story is the story of the Porcelain Doll.

For the longest time in their life, Mr. and Mrs. Kue have wanted a child. They tried upon their first, second, and third year of marriage to no avail. On their fourth, Mrs. Kue grew lonely, sad, and weak. Mr. Kue, not knowing what to do, consulted the word of a renowned Hmong shaman.

“Son, you’re wife has become gravely ill,” the shaman announced upon deep calculation, “but have no fear, I have got just the cure. Late at night, select a room in your house vacant of newborn spirits and place in it this porcelain doll.” The shaman handed over a porcelain doll containing dark, shiny hair and a rosy pink smile.

Mr. Kue accepted it hesitantly in his trembling hands. “How would this possibly fix our situation, sir?” asked Mr. Kue ever so politely as to not undermine the shaman.

“This doll is unlike any. With this doll in your home, your wife will soon be with child, and all her concerns in the world will cease.” Mr. Kue’s face grew hopeful.

“Mind you, however, that you must not allow the doll to be cracked, or else you’ll face the misery similar to that of loosing a child.” Mr. Kue’s heart sunk at the news. Taking this doll would potentially place him and his wife in a more vulnerable state. However, thinking about his wife’s pain softened him, and he agreed to the terms of the arrangement.

Mr. Kue returned home with the doll in hand. With not much space in their single-bedroom home, Mr. Kue cleared a shelf in their utility closet and placed atop there the doll.

That night, he embraced his wife and they attempted to conceive. He noticed however that she appeared a bit strange, but thought nothing of it. The very next morning, Mrs. Kue awoke with a fresh smile and a changed spirit. Mr. Kue was silently excited, thinking that the enchantment had worked.

Days passed and Mrs. Kue then resumed to her old, melancholy mood. Mr. Kue patiently ignored the change and hoped for the best.

Weeks went by and Mrs. Kue showed no signs of pregnancy. Her mood, as he feared, worsened. One day, Mr. Kue noticed the door to their utility closet left ajar. He peeked through the crack of the door and found the doll still sitting there, smiling softly back at him. He was relieved.

Days went by and Mr. Kue started to notice a dramatic shift in his wife’s mood. She also grew very distant and quiet. He again went and checked the closet for the doll. It was still in there, hair shiny and all, smiling back at him. He settled down with calm, but his heart was heavy over concern for his wife.

During dinner that night, he asked, “Honey, why have you been so gloomy lately? Did something happen that I am not aware of?”

His wife’s face did not change. “Just eat your dinner and you’ll know,” she answered. Like the good husband he is, he simply did as she asked without question. He consumed a spoon of rice and a little bite of the roasted pork rib on his plate. The seasoning blanketed on his tongue, tangy and spicy; he chewed silently, satisfied with the taste. “What is this, sweetie? This meat is so juicy and tender.” He knew that they had not any more pork sections in their freezer, only Hmong chicken. They had not gone to Long Cheng in a while to restore their pork supply, which puzzled him as to how she obtained such tender sections of the meat.

“Why it is baby back ribs.” She smiled coyly at him. He stared down at his plate. Baby sprouts, baby green beans, baby back ribs. His eyes began to widen at his realization. “Are you… are we?” His wife’s smile grew at once.

He rejoiced at the news, unspoken but understood. Tears filled his eyes as he sprinted out of his chair and across the table to embrace his beloved wife, now with child. Mr. Kue had never seen his wife so happy. He rejoiced at the thought that finally, their dream of a family was coming true.

Within the next couple of months, the two prepared a little section of their bedroom for the baby. They decorated the wall with baby art, inserted a crib and installed a little fridge beside it for baby milk. Relatives and friends bought them all sorts of baby clothes and toys, of which they piled up high in their bedroom, closet, and even their utility closet. When things got too cluttered, his wife decided to throw some stuff out and clear some space.

“Honey,” said Mrs. Kue, “I’m throwing some of this old junk out to Goodwill to make room for the baby stuff.”

“Okay. Just be sure to leave my important belongings,” he reassured, of course referring to things he needed for daily use. He was not thinking about the porcelain doll and in fact had not thought about it in a while as his mind was much consumed with his excitement of the coming newborn.

“Honey, whose doll is this?” Mrs. Kue asked, showing him the smiling doll. Mr. Kue instantly realized that the doll in fact led to their baby-success; he had not previously attributed the two due to his overwhelming joy with the pregnancy. But in fact, the doll worked to their favor after all. It really did. So he responded, “Oh nothing, sweetie, go ahead and donate it.”

Mrs. Kue dropped it in her donation bin that was on the ground, and the porcelain doll’s head impacted a hard object and shattered into pieces right in the bin. “Oh no,” she said, “guess I’ll have to clean that up.”

“No prob,” Mr. Kue said nonchalantly. He grabbed the vacuum and vacuumed up the broken pieces of the porcelain doll, everything from tiny broken shards to the pink-rosy smile that remained intact on one of the larger chips. Upon seeing the smile, he hesitated a bit at the shaman’s reminder, not to crack the doll, but he brushed it away, thinking that the incantation was overdue given the fact that they’d already been able to conceive.

When it came time, his wife was rushed to the hospital to give birth and out came the most beautiful, rosy-lipped little girl that he’d ever seen. She had a full head of dark, smooth hair and round cheeks. His wife was exhausted and fell into a deep sleep following the birth. He embraced the baby alone and gave their daughter the name that had they both chosen many months before.

When his wife awoke, she was still exhausted and did not speak much. He took it as an effect of postpartum distress and thought nothing of it. Following the hospital stay and even at their own home, his wife showed no interest in wanting to hold or embrace the baby. He thought it odd but took care of the chores anyhow, not wanting to disturb his wife.

One night, his daughter cried and woke him. He felt the baby’s diaper. It was wet. He shushed the baby to a coo and turned on the nightlight to change the baby. As the light flicked on, Mr. Kue noticed the baby’s rosy pink smile for the first time. He was sure he’d seen that smile once before, but could not place where. He looked from his lightly snoring wife to the baby, and from the baby back to his lightly snoring wife. Then suddenly, his heart sank for a brief moment. He became speechless.

It was the doll. Everything that the shaman had said about the doll was true. He’d broken the doll, and now his wife, even with a child, was as miserable as having lost a child.

And it would be so for the rest of their days. 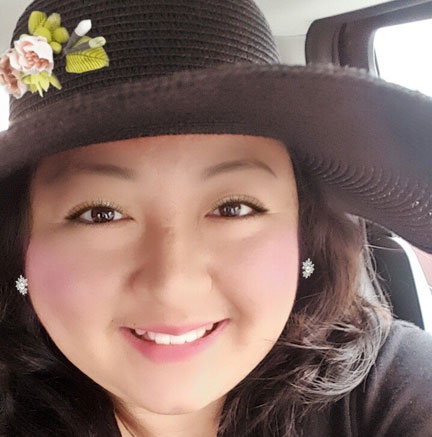 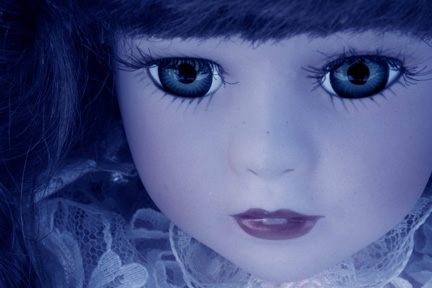