Public vs Private vs Charter Schools

In the often overwhelming world of school choice, there are public, private, and charters. How do you decide which type of school is right for your child?

Every parent wants the best education for their children, but where should you begin your search? For many parents, choosing between the local public school, a charter school, or a private school can become a roadblock in and of itself.

For many, personal bias plays a huge role in their choice. Some equate private school tuition with a superior education. Others are firmly committed to public schools because they provide a more diverse cultural experience.

It can be confusing because school choices are much wider than they used to be. And depending on your family, your child and your district, the best choice may not be the neighborhood school around the corner.

To pay or not to pay

As of the 2010-2011 school year, our country had a total of nearly 99,000 public schools; these elementary, middle, and high schools all operate with the help of tax dollars. Most of them are traditional schools with educational standards set by each state. Best of all, the education is free.

Because public schools are reliant on federal, state, and local tax dollars, funding can be cut. Also, public schools have to follow state guidelines on what they can teach and how children are evaluated.

Charter schools offer an institutional hybrid. Like traditional public schools, charter schools are free, and they can’t discriminate against students because of their race, gender, or disability. However, parents must usually submit a separate application to enroll a child in a charter school, and like private schools, spaces are often limited. Charter schools are independently run, and some are operated by for-profit private companies.

However, charter schools are still funded by government coffers and accountable to the government body — be it state, county, or district — that provides the charter. (Many successful charters do substantial additional fundraising as well.) If a school is mismanaged or test scores are poor, a charter school can be shut down.

On the other hand, most private schools depend on their own funding, which may come from parents through tuition, grants, donations, and endowments. Private schools also often actively seek money from alumni, businesses, and community organizations. If the school is associated with a religious group, as is the case with Catholic parochial schools, the religious organization — like the Catholic Church — may be an important source of funding as well. Finally, in areas with a voucher system, some private schools are primarily funded by tuition paid for by a voucher from the state.

Because they’re autonomous, private schools are free to offer religious education, or curriculum not regulated by state standards.

Tuition can be expensive. Religious schools tend to be cheaper because of their additional sources of funding and their sometimes larger class sizes. For example, Catholic schools are far less expensive than most independent private schools.

The way schools place students in certain schools (and not others) varies radically by region and can be a source of parental anxiety in navigating the system and advocating for the best fit for your child. In many larger school districts, students are placed in schools via a lottery.

Charter schools can also be hard to get into if they are popular, and they may use a lottery system to fill any vacancies.

Private schools are not required to accept every child and often require extensive applications that involve multiple interviews, essays, and testing. Private schools can be extremely selective: not only can they choose students based on their academic achievement but also their ethnicity, gender, and religion, as well as the special attributes (or assets) of their parents.

Public schools must follow state guidelines that outline teaching standards and testing procedures. In theory, this creates a certain amount of quality control over academic subjects like reading and mathematics. But with education standards often set by the state, some criticize the rigid curriculum that many public schools offer.

Funding problems have forced many public schools to reduce teaching staffs and cut back on classes that are outside the state’s core curriculum, such as music and arts. Charter schools also may struggle with funding and typically receive less per pupil than traditional public schools. Many charter schools raise substantial amounts of money from private sources — for spending per pupil between charter schools can vary radically within a single city.

Class sizes differ radically from districts to district, so it’s important not to assume too much about student teacher ratios until you investigate. Although many private schools provide small classes with low student-to-teacher ratios, there is no guarantee that such schools will keep their class size below a certain level.

For many parents, school is a microcosm of the real world, and many want their child to attend schools that are just as diverse as the communities around them. Public schools systems have tried to address racial segregation by creating magnet schools. Like charter schools, magnet schools are public, and they draw students from different incomes and racial groups often by offering special programs, such as math, engineering, and environmental sciences.

For many parents, a faith-based education matters. Since teaching religion in a non-secular context in public schools is banned, these parents may opt for a private school with a religious component. Catholic, Jewish, and Christian schools can embrace faith-based education in their curriculum and other activities. Many go beyond academics and require daily attendance at a chapel, synagogue, or temple.

Freedom of school choice is wider than it ever was, but it doesn’t have to be daunting for parents. Visiting a school and talking to other parents is the key to finding out if it’s the right match no matter what kind of school you’re looking for. Selecting a school for your child can be a deeply personal choice and may be rooted in your family’s beliefs and values. Whether a school is private, public, or charter, what’s most important is that the school is a good fit for your child and your family. Be sure to visit any school you are considering. Talk to other parents whose children have attended the school. 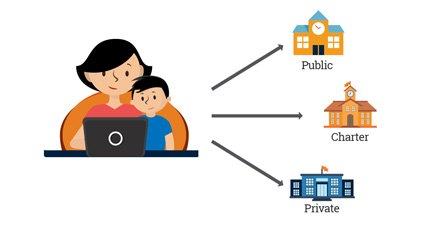 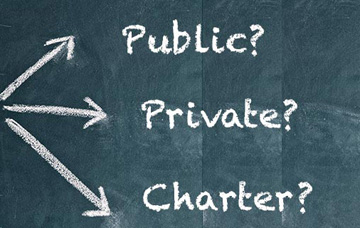