“We are going to protect small businesses owners and their families so they can continue to run their companies with dedication and with love.” – President Donald J. Trump

Minority-owned businesses are a bedrock of the American economy and are a critical component in our new period of economic revival. For more than 45 years, the U.S. Department of Commerce, Minority Business Development Agency (MBDA) has led Federal Government efforts to provide support to our nation’s fastest growing business sector – minority-owned businesses.

On October 24, 2017, President Trump welcomed the recipients of the National Minority Enterprise Development (MED) Week Awards to the White House. The MED Week awards program, which is sponsored by MBDA, celebrates and recognizes the outstanding achievements of minority entrepreneurs, as well as individuals and organizations that have demonstrated exemplary leadership in advancing global minority business enterprise. This Administration is the first ever, since President Ronald Reagan first declared MED Week in 1983, to successfully host the award winners in the Oval Office with the President of the United States.

The Trump Administration is committed to creating a business climate in which minority business enterprises can thrive and expand. To commemorate the achievements of MED Week Award recipients and to recognize the contributions of minority owned businesses to our Nation’s economy, President Trump proclaimed October 22 through October 28, 2017, National Minority Enterprise Development Week.

“This administration remains committed to the empowerment of American minority business enterprises, and the Minority Business Development Agency is proud to help position MBEs for long-term success in their industries of expertise and in America’s marketplace,” said MBDA Acting National Director Chris Garcia. “It was a great honor to accompany the 2017 National Minority Enterprise Development Week award winners to the Oval Office, and to share in the celebration of their accomplishments alongside our Commander in Chief and U.S. Secretary of Commerce Wilbur Ross.” 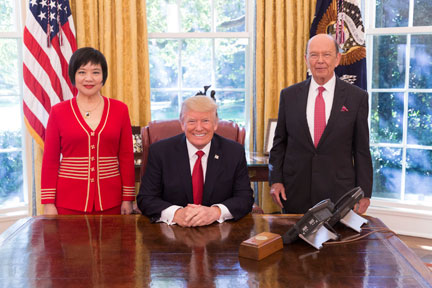 Advocate of the Year Award is being presented to Chiling Tong, President and CEO of the National Asian Pacific Islander American Chamber of Commerce and Entrepreneurship (ACE) 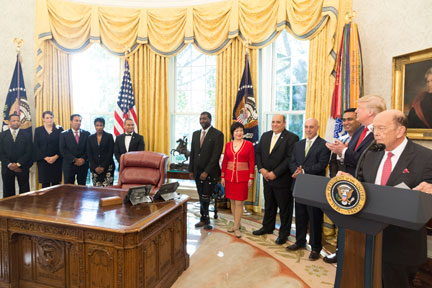