The days passed. Friday merged into Saturday, Saturday into gloomy Sunday. Monday came again and Nraug Txuj hadn’t called. He didn’t appear at their house. No email came into her inbox. Had he changed his mind about her? Was he no longer thinking about her? What was his intention? He had said they would meet. She’d thought that he would be the one to initiate the meeting. This waiting, all this waiting, suddenly made time slow down. How did time know how to slow? Nkauj Yiv never knew that that was even possible. To her, minutes felt like hours, hours like days, and days like months. To her, time was taunting her every move. Threatening to slow some more upon her waking. Never before has time ever been such an enemy. People said time does heal all wounds. How was it that time, now for her, was creating a gaping wound deeper and deeper into her heart, she didn’t know how to manage the pain. When would he reach out to her again?

Every time she hovered her trembling fingers over her father’s iPad to type, her chest tightened and she felt light in the head. She’d overthink about the possible outcomes. What would he think of her? What would she look like emailing a guy first? Wasn’t she a respectable Hmong daughter? What would her dad think of her? She couldn’t bring herself to do it. It was simply against her morals, against her character. Absolutely against all that she’s ever known. She couldn’t do it. She wouldn’t do it. It was not like her to do it.

In her room that evening, Nkauj Yiv took her grandmother’s hand-sewn shoe into her embrace. Its paj ntaub was embroidered so beautifully, the details so elaborate, one could only guess how long it took her grandmother to sew it. The silver ncas attached at the toes was starting to rust near its rough edge. Nkauj Yiv took a washcloth and a bowl of warm water and scrubbed away the tarnish with her fingernails scratching behind the cloth. The bright silver hue did not return, but at least some of the yellowing splotches wiped off. The pearly silver shine on the engraved jagged leaves of the ncas brought her solace as she recalled her grandmother’s gentle fingers polishing the shoe many years ago. “Grandmother,” she whispered. “Please give me an answer. Does he really feel strongly for me? Or is he simply leading me down a broken path?” Upon hearing herself say those words, an intense pain shocked her from within. How was it that her heart was breaking even before she knew that it could break? A warm tear spilled down the corner of her eye. Her chin trembled; she bit her lip. How was it that Nraug Txuj, a man she hardly knew, possessed so much power, so much hold over her? When had she invited him into her heart? When had she allowed him entry? Even she didn’t know.

The next morning, the doorbell rang. “I’ll get it!” yelled an eager Dib running down the living room stairs. Nkauj Yiv was merely washing a bowl of jasmine rice under running water, readying them for a presoak before she would proceed to steaming them for dinner. The low hissing of the kitchen faucet gave her relief from her deep thoughts of Nraug Txuj. He was a cruel man, not even caring about the encounter they’d had the last time he’d visited. The way he held her hand at the dinner table. The way he wrapped his arm around her chair when the crystal glass shattered. The way he’d cleaned her wound in the washroom. All of that was way too obvious that he’d felt something for her. And yet, where did he go? Why hadn’t he responded to her? It’s been over a week. Did this mean that he really didn’t feel for her what she thought he did? Nkauj Yiv’s fingers closed in on loose grains of rice, each one breaking into smaller pieces in her hands as she rubbed away the cloudy liquid.

Nkauj Yiv’s shoulders shuddered. It was stepmother in her soft voice. Something was awry. “Yes?”

“Don’t cook anymore, we won’t be having dinner here tonight.”

Nkauj Yiv turned around from the kitchen sink to meet stepmother’s challenging glare. Her heart lunged. It was Nraug Txuj. On one side stood Dib and on another stood stepmother. She felt her jaw hang. He was holding Dib’s hand in his. What could possibly be happening? A flame burned in her chest and rode up to her throat. She wanted to scream out loud, pound her fist onto the kitchen counter and demand explanations. She wanted to call him a liar. She wanted to slap his face for enchanting her to feel such pitiful emotions these past few days and then have the nerve to show up here and hold Dib’s hands.“Koj tuaj lov?” (Welcome, guest) Nkauj Yiv heard herself say.

“Tuaj os,” he said, his face colored with a rush of guilt.

Nkauj Yiv’s eyes followed father as he entered the dining room. In his hands was a black umbrella tied about it an enlarged black and white striped siv ceeb laus (traditional scarf). She felt the pellets of wet, broken rice leave her fingers, finding their way to the tiled kitchen floor. Her breath caught at once. Was this what it appeared to be? She looked into Nraug Txuj’s eyes, but he looked away. She fought back tears, biting her bottom lip to keep from crying.

“We will be going out to celebrate me tub Nraug Txuj and Dib’s engagement,” stepmother confirmed.

So it was true. Nraug Txuj had brought in elders with the umbrella and a siv ceeb laus and has come to ask for Dib’s hand. Nkuaj Yiv’s eyes narrowed at him this time. She wanted it to be false, but this was actually happening. Father hung the umbrella before the closet door. In but a few days, the wedding ceremony would be set. Elders would come and bargain Dib’s bride’s price. And her Nraug Txuj would be forever gone.

“Me tub, coj me Dib neb mus tim nov os,” (Dear son, take lovely Dib and come this way) stepmother said, ushering them toward the garage. But Nraug Txuj didn’t move. He let go of Dib’s strong grasp and slowly approached Nkauj Yiv. The closer he came, the more blurry he appeared to Nkauj Yiv’s vision. The picture of him before her was fading as she stood there, fingers wrinkly wet, rice pellets on the floor. Nraug Txuj’s voice sounded muffled, like a goblin’s. The next she knew, her world became dark. 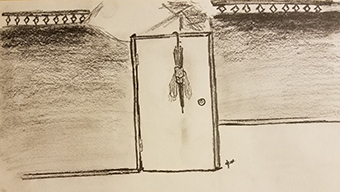