Nraug Txuj’s brows creased when Nkauj Yiv shook her head, no. She gazed over at stepmother, surveying the twitch of her brow. She wouldn’t hear the end of stepmother’s wrath following Nraug Txuj’s departure if she happened to join the meal.

“Son,” said stepmother, “my dear daughter has got so much work to do, she won’t be able to join…”

“Please,” Nraug Txuj said, his stare not leaving Nkauj Yiv’s reluctant glance. “It would be unkind if you didn’t join us,” he suggested.

Nkauj Yiv stood there, unsure if she should leave or stay. A dim silence filled the dining room. Her gaze passed from stepmother to father. Her back shuddered as father cleared his throat suddenly in a hoarse roar.

“Nkauj Yiv,” father croaked. “Put out a plate and sit.”

She could see stepmother’s lips wrinkle as they puckered displeasingly. Dib and Taub, each of them sitting on either side of Nraug Txuj, narrowed their eyes all the while stuffing forkfuls of rotisserie chicken into their plump mouths.

“I must go,” she heard herself say. “Please, eat without me.” It was the polite Hmong thing to say. The cook, in most households, did not dine with the fine guests. It wasn’t the fine thing to do. Besides, she was not used to such a formality. Even though father had always insisted during every meal, she figured, if her absence could make stepmother and Dib and Taub hold their tongues, she was glad to exit for the peace of her father’s meal. Nkauj Yiv knew how much father loathed the house upon hearing disputes and loud voices.

“Nkauj Yiv,” father rasped. “You haven’t eaten, take a plate and sit down.”

Nraug Txuj stood up instantly. “Leej muam Nkauj Yiv, please sit down. I’ll make room for you.” He approached Nkauj Yiv, dragging her along by the wrist. She stumbled forward almost by force. Dinner plates and silverware clinked as Nraug Txuj maneuvered and shifted the dishes around. Father’s face was dull as it frequently was, but a loud grunt escaped his nostrils. He gave Dib and Taub the “know your manners” stare; the slight jerk of his head told the two to shift over in their seats. Lips parted and scoffing, both Dib and Taub shifted over one each, making room for one more chair. Nraug Txuj put the extra plate, intended to hold food waste, at the empty spot beside father.

She dropped onto the chair, stiff as a statue. Nraug Txuj took the chair beside her. He placed the spoon and fork on her dinner plate. “Please, eat,” he instructed.

“Oh,” Nkauj Yiv said, coming to the edge of her chair. “Let me get you some silverware…”

Nkauj Yiv’s breath caught as his hands abruptly clasped over hers that rested atop the dinner table. She freed her hand onto her lap at once. Her cheeks grew warm.

“No,” he said softer this time, his hand still on the dinner table. “Please, allow me. You’ve worked hard enough already, Nkauj Yiv. I saw where you got them from earlier; I’ll fetch them myself.”

Her throat was pulsing. She was not used to such kind treatment. Nor was she used to dining at the same table with stepmother and Dib and Taub. She dreaded it and her heart grew heavy. She silently wished that she would have snuck out earlier when she had the chance.

Nraug Txuj returned with a fork and spoon and a wide smile on his face. He planted his bottom on the seat beside Nkauj Yiv. Though others’ forks and spooks clinked on their plates at each scoop of rice over broth and chicken cutlets tossed in brilliant green Gailan, Nkauj Yiv had not but scooped rice onto her plate. She met Nraug Txuj’s stare as if awaiting his permission to dine. It appeared odd to her how comfortable he was in her home. So much so that her own discomfort at the dinner table seemed the more apparent.

He smiled warmly, his head nodding once. She couldn’t help but return the smile. Her cheeks grew warm. The hairs at her nape rose. A tingly sensation rode down her spine.

A crystal glass had fallen in between the space that separated Taub and Nkauj Yiv. “How dare you!” exclaimed Taub, obviously feigning an accident. “Taub, you dare startle me to drop my crystal glass. You clumsy little…”

Nkauj Yiv stood up from her chair and collapsed back down with a gasp. A nick of pain pierced at her right foot near her small toe. She surveyed. A shard of glass hand scraped the side of her foot as it shattered on the tiled floor. She held her breath as a stream of blood snaked down her elevated foot toward her heel.

“You’re hurt,” said Nraug Txuj, alarmed. “Can you walk?” His arm came around her chair, ready to catch her fall.

“I-I’ll be fine.” That was only half true. Nkauj Yiv absolutely could not stomach the sight of her own blood, let alone blood streaming from a paper-thin slit of a wound.

She limped up from her chair, bearing weight on her left foot. Nraug Txuj matched her stance, as if a magnetic force tied the two of them together. His arms came around her. “Let me help you.”

“Please, I’m fine. Please sit and dine with the others. Don’t worry about me.”

“Aws.” (Sure) Nkauj Yiv heard him dutifully respond as she limped herself down the hall and into the guest bathroom. The light turned on and the ceiling ventilator hummed. Muffled voices bounced from the dining room. She gasped sharply as she sat herself down on the toilet cover and crossed her left leg over her right. With a wad of toilet tissue, she dabbed away the blood with gritted teeth. Warm line of tears rolled down either side of her cheeks as she wrapped her head around what had just happened. Was it so bad that she’d joined the family for a meal, just once? Or was it her ill fate, not destined to be a worthy member of her own family?

The doorknob rattled. She looked up.

Her eyes widened. Her throat pulsed. “Why aren’t you eating?”

“How can I eat when you are in pain, huh?” He came to his knees, his hands hovered at he upraised foot.

“Please, I help my mom all the time with her wounds,” he said, easing her nerves. “Please, let me…”

Her eyes caught his. They were brown, not black. He had long lashes too, but they were curled downwards. His face was clear of any blemishes, and his nose was perfectly straight. Why hadn’t she noticed that before during their dance?

“Yes,” she said, not sure if answering his call or permitting him to assist. She cleared her throat forcibly.

He smiled warmly, his eyes not leaving hers. She chuckled through his nostrils as if noticing something new in her eyes.

“Do you really want to know?”

“Yes, of course.” She brushed a hand at her hairline; paranoid that she may have had food stains there.

“You look cute when you’re shy.”

She looked away, half-smiling, unsure how to stomach those words.

“Please, hurry. You must get back to the dinner table.”

“Not without you,” he said, his fingers padding a damp cloth softly over her wound.

“Then promise me, you’ll see me again. Not here, but somewhere else.”

He smiled, came to his feet, and then exited.

Stay tuned for Chapter 9 in the 3/13 issue of the Hmong Times. 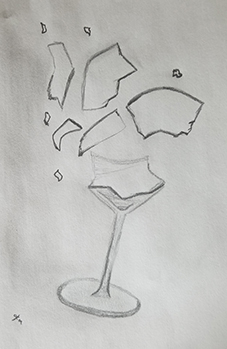