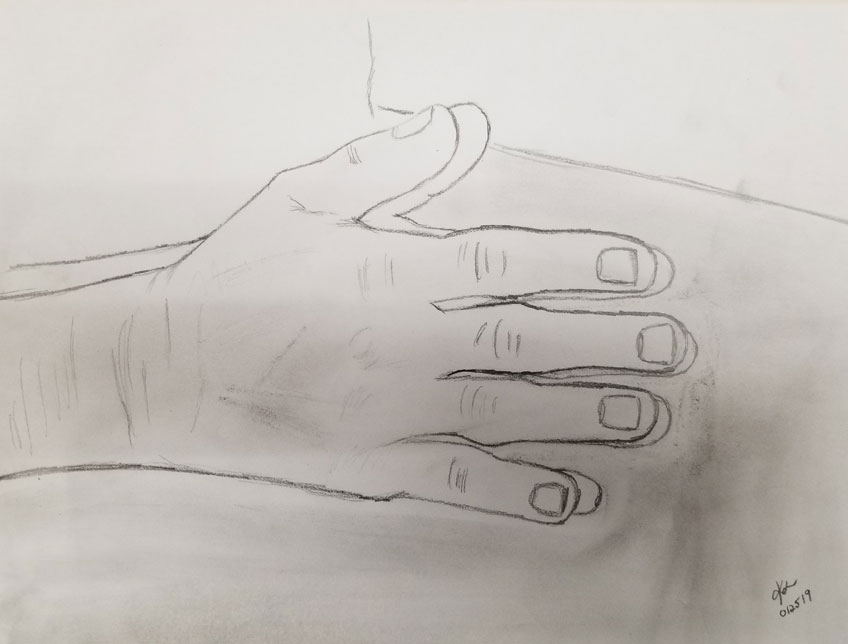 Nkauj Yiv’s felt her jaw hang. Her eyes did not blink at the sight of him. Just when she thought that she was only meeting with Richard, he appears before her.

Nraug Txuj acknowledged Richard’s departure with a nod and an uneasy smile. He took the chair across from her and eagle-eyed her. A crooked grin grew on his face. Nkauj Yiv couldn’t meet his stare. Her stomach heaved. She realized then that she hadn’t had any breakfast that morning. Breathing became troublesome.

She nodded intently, her lips dry. She swallowed hard, her stare focused on the smudge on the table. Her cheeks grew hot. She would kick herself right now if she could. All her nights of thinking about him, wondering about the things she would say to him should they ever meet again, and now she was acting like a complete fool.

“Please, don’t be nervous,” he said. His hands reached across the table to collect the shoe. His fingers were long and thick, his nails rectangular and neatly trimmed. The peak of his knuckles and even on the inside of his palms were callused. Perhaps he was a hard worker or maybe he partook in much fieldwork. They were so unlike her soft, small hands. As she surveyed them, she realized that even her own father hadn’t the same roughness and marks on his hands. His fingers were so thick and well formed; the creases on each finger joint were so dried and cracked, layers of moisturizer would not have done them justice.

He held the shoe in one hand, his fingers traced the curl of the paj ntaub from the brilliant green leaf to the velvet rose bud. His demeanor seemingly shifted. Things didn’t seem so casual all of a sudden. Nkauj Yiv had the feeling she was sitting across from a business partner, about to strike a business deal. She straightened in her seat and winced a little at the sound of her chair squeaking.

She blinked. “Where is what?”

“The other shoe of course.” His perfect teeth showed through his smile. Nkauj Yiv felt her cheeks warm. Her throat knotted as she swallowed. It appeared as though he may have had braces growing up. What kind of Hmong family got their children braces? Maybe a fortunate one. Nkauj Yiv wondered what his parents did for a living. Were they educated? She guessed so; that would explain his well-mannered self and his being in college.

“So you are saying you aren’t the owner?” He teased.

Nkauj Yiv blinked, hiding her disbelief at his daringness. “You know I’m the owner!” she said with a bit of grief in her voice. “Don’t you recognize me?” She didn’t realize it at first, but his feigning to know her had hurt.

“Hey, a deal is a deal right? I needed the other shoe to prove you are the owner, and you don’t have it. I guess we’re just going to have to meet again,” he chuckled.

His face was haughty like a lion’s. It displeased her.

She let out a deep-held sigh. “Okay, if you do not intend to return my shoe to me today, I’ll just be going.” Nkauj Yiv stood from her chair, her hands smoothening the back of her skirt.

“Wait…“ Nraug Txuj’s hand clasped her wrist at once. She jumped. How dare he! She pulled back but he did not let go. “Promise you’ll see me again.”

Her brows knitted, eyes widened. People around them were staring. They must think that this man and she were an item. Oh how embarrassing. What if her relatives were lurking nearby. What would they think of her? That she was meeting guys at Hmong Village in secret? What would she tell her dad if news got to him? How would she explain herself? And her stepmother and stepsisters, they would find out about her outing to the RiverCentre. And how they would stretch the truth.

“Only if you promise.”

“Why would I want to see you again?”

His eyes struck down, his chin tilted subtly toward the table gesturing at the shoe.

Nkauj Yiv looked around the room, people’s eyes were still glued on them. She swiped her wrist away from his grasp. “Leej Nus Nraug Txuj Xeem Lis, tsis txhob saib tsis tau kuvn nawb,” she said with a likewise business demeanor, heat rising up at her throat. (Sir Dochu Lee, don’t disrespect me.) “If you wanted to give me the shoe, you would have given it already. I recognize you very well from the New Year; don’t claim you do not recognize me.”

He looked away as a scoff of a laugh escaped him, apparently amused or flattered. His cheeks reddened. “You recognize me?”

“Of course I do!” She heard herself saying. Regret filled her belly. She bit her lip.

“So, you’ve thought of me since the dance?”

She peered at him up and down. What kind of game was he playing here? “So, you DO remember me?” she said displeasingly. “Are you going to return my shoe then?” She feigned a glance at her wristwatch. “I’ve really got to run.”

“You really don’t know it when someone has interest in you, do you?” he teased.

Did she hear him right? Interest. What interest? “Excuse me?” She was perplexed.

“How important is this shoe to you?” His face softened.

“If it’s not important to me, why would I be meeting you here?”

He smiled warmly and nodded his head. “Understood. Meet me again.”

Nkauj Yiv really could not see that happening. Not just because it was hard for her to exit the house on outings, but also because doing so was costly and also presented a risk of her stepmother and stepsisters finding out of her activities and stretching the truth. She exhaled, “Where?”

“Anywhere you want. I want you to be comfortable.” He deposited the shoe back into the parcel and tucked it under his arm as if readying to leave. She bit her lip at her surveillance. What was she getting herself into?

“I don’t often have transportation,” she admitted.

“Where do you go to school?”

Her stomach knotted. She wanted to make up a lie. University of Minnesota? Augsburg College? St. Mary’s? “University of St. Thomas,” she recoiled at her own response.

She felt a hollow cave growing in her chest. Her breathing heightened.

“How come I’ve never seen you around? What’s your major?”

She hurried out the exit corridor.

She glanced back at his confused stare before exiting. “Keep it.”