Nkauj Yiv was struck in astonishment. How had this man known her name? She froze in place.

“Nkauj Yiv,” he said again. Through all the white noise that surrounded them, she couldn’t tear her gaze away from him. Though a daring effort, she searched his dark eyes for a semblance of recognition.

“How do you know my name?” she wanted to say. But she was feeling a bit bashful and suddenly unsure of herself. Besides school, she was not out in public often and hadn’t much developed her social skills. She watched his light glossed lips mouth her name again. Nkauj Yiv. Had she known him before from some place?

There, he said it again. Only this time, it wasn’t her name he was uttering. “Kaum Yim, puas yog nab?” (Eighteen [sounds like Nkauj Yiv], is that right?)

“Koj yog 18 xyoo lawm puas yog nab leej muam?” (Are you 18 years old, miss?) She observed him staring her from head to toe, apparently amused by her striking bold American attire. His wasn’t far from striking himself. He wore a black American formal suit and fashioned above it an embroidered Hmong vest hand-decorated with white glass beads stringing shimmering French silver coins that clattered melodiously at his every move. His dark thick hair was combed cleanly back complementing his skin complexion from his forehead down to his sharp chin, a kind shade of bronze which reminded her of the beach sand.

“Are you here with anyone by chance?” he asked politely, the two of them now taking strides away from the food booths and toward the open ballroom.

Nkauj Yiv, not used to speaking to unfamiliar men or men in general, shook her head in response.

“Would you be so kind as to be my partner in the couple’s dance?”

Nkauj Yiv looked to him as if to gauge his seriousness at that question. No one has ever asked for her in that way before. No one has ever seen her in that way before. Not at school, at home, nor at her regular outings to and from the farmer’s market in shop for dinner greens. It struck her that maybe, today, in her own mother’s beautiful gown, she might appear the slightest bit like any other woman, attractive dare she say.

“I’m sorry, don’t mind me, but I do not know how to dance. I’ve never done it before,” she confessed. His eyes brightened.

The corner of his lips tilted in a handsome smile. Without another word, he extended a hand toward Nkauj Yiv, the two of them standing in the center of the dance floor now. “Kuv yog Nraug Txuj, xeem lis os. Kuv muaj 20 xyoos. Es leej muam koj yog xeem dab tsis nab?” (My name is Nraug Txuj Lee. I am 20 years old. Miss, what is your clan?)

She took his hand with her subtle fingers and shook it gently. “Kuv yog xeem Xyooj os.” (I am a Xiong.)

A late 80’s Hmong slow song transmitted on the stage’s speaker system and Touly Vangkhue’s full voice sang along to slow strumming guitar strings and a leisurely tambourine rhythm. To her surprise, Nraug Txuj took her hands in his and placed them on his shoulders. “There,” he eased with a gentle smile. She felt Nraug Txuj’s strong grasp come around her waist, and she faltered toward him at her every move. Her flat ballet shoes treaded over the hem of her smooth satin dress, each step putting her on edge.

She couldn’t believe the flutters that were growing in her belly and spreading down her legs. The world around her was silent; they were the only two people in the entire ballroom. He stared so intently at her, she feared that perhaps she’d had a smudge on her face. Only then, she realized that she hadn’t worn any makeup that morning, as she should have. The song seemed to sway with them, or maybe them with the song, moving left to right, left to right. Though they’d been spinning in slow half circles, she felt like she could do this all day and even through the night. Had time suddenly stopped? Or was she dreaming? When she was in his arms, Nraug Txuj’s arms, it was a sensation unlike any that she’s ever known. She felt as beautiful as a blooming rose. As important as the polished silver xaus dais ncais (silver Hmong necklace) around his neck. He smiled warmly as he noticed her perusal. She looked away for a brief second, recomposing herself, before peering back into his survey once more.

She could see his lightly lashed eyes staring down at her as she tried to control her own hovering breath. She suddenly felt very light headed, half from fear that she’d slip on her satin gown and fall over, another half from the unbearable sensation of being victim to his piercing gaze. She didn’t want to return his stare; she was not accustomed to staring into a gentleman’s eyes. “I’ve got you,” he said in perfect English as if sensing her discomposure. Her stomach flipped and her pulse thrummed at his words.

The dance floor crowded with more couples now that an occasional elbow or forearm brushed Nkauj Yiv’s own. Nraug Txuj pressed her closer to him, so close that she could feel the warmth of his unwavering breath, the still of his sturdy hands, and the scent of his cologne, a masculine blend of sharp mint and cool midnight air.

“Ab yom ua cas nej nim zoo zoo nkauj es peb yuav ntsia tsis dhua li nab?” (Oh and how is it possible that you are so beautiful and I cannot stop staring?) he quoted the line of a long forgotten Hmong poet. His Hmong voice was kind, she thought. He enunciated his consonants clearly unlike most Hmong guys his age. His English was also impressive, very fluent and lacking of a Hmong accent – something she found attractive. It suited his smile. Maybe he was well educated, she thought, unlike how she wouldn’t be. She’d just graduated high school that spring, one year before her class, but that wouldn’t mean much with not a collegiate future before her. She found her heart racing at the thought. What would his family think of her? His parents? She was an orphan girl with not many talents. And these days, Hmong parents were so picky about educated mates for their sons.

“You haven’t told me your name,” he said, interrupting her train of thought.

She felt her cheeks heat up at his words. “Are all men as daring as you?” she asked in true curiosity.

He let out a chuckle through his nostrils. “Are you teasing me?”

She parted her lips in contemplation, not sure what to say.

Nkauj Yiv chuckled, finally feeling less tense now, a relief that was short-lived as a shrieking loud voice squealed merely two heads behind her. “You wretched old hag!” came the voice of Dib, her elder stepsister. Nkauj Yiv looked over and saw an irritated Dib whipping her rhinestone lined hand clutch at an elderly couple dancing beside them. Her heart leapt to her feet. “What’s wrong, darling?” came the urgent voice of her stepmother, shooting into the scene from the outskirts of the dance floor.

Nkauj Yiv, not minding for the commotion, threw her hands at her face and started to take off without a word. She was surprised to be caught by Nraug Txuj’s grasp at her hand, holding on tight and not letting her go. His brows wrinkled in confusion. “Where are you going?”

“But I haven’t gotten your name!” he said urgently amidst the evermore urgent cries from the crowd at Dib’s dilemma. “Please,” he said, one hand tightly stilling seizing hers. “Stay with me won’t you?”

“I’m sorry,” she said again, staring overhead of him. She whipped away his hand with her every might and tried to escape. Careless and unable to hold up her ever long satin dress, her ballet flat stepped over the silky smooth hem and she fell to the floor. Embarrassed, but more scared, she gathered her skirts and came to her feet, limping now. After but a few strides, she noticed that she’d lost a shoe. Staring back at the breaking crowd, her stepmother’s face becoming more clear in it all, she knew it was not worth the journey to retrieve it, even if it that had been her only pair.

Stay tuned for Chapter 3 in the December 19th issue of the Hmong Times. 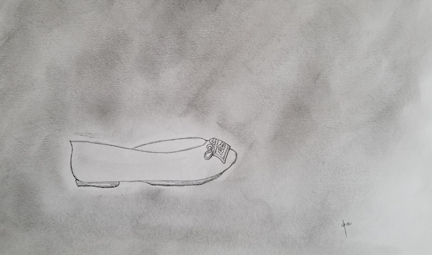