MINORS ASIA – #9 In A Series For Hmong Times – Hard Work

When most folks woke up in the predawn hour in Ban Vinai it was to the crowing of competing roosters throughout the hills and valleys in the camp housing tens of thousands of Hmong refugees, many of whom, it seems, had roosters.

But between the waves of crowing could be heard the sounds that were there even before the roosters woke up, a steady beat of bare feet and flip-flops of girls and women as they ran down the hillsides on heavily used paths. They were on their way with their empty buckets and containers to get in line at a well, chattering and giggling to ward off the darkness.

As these photos show, Ban Vinai refugee camp was a busy place, all day every day, with folks carrying water back up the hills, hauling firewood down from the hills, splitting logs for kindling, tending tiny gardens, forging traditional Hmong knives and tools in the blacksmith shop, slicing bamboo and assembling thatch roofing panels, chores often done while looking after grandchildren.

Beyond the hard work of just existing in camp, many of the younger adults sought work of any kind. There were precious few paying jobs for refugees. Some of the international voluntary agencies working in the camp, such as Minnesota-based American Refugee Committee’s hospital program, the UNHCR office, the Thai Ministry of Interior or the U.S. Embassy would hire staff and interpreters from time to time.

A few excerpts about working in and out of camp from our ongoing interviews:

“When I got to the camp, there’s a guy who introduced me to a job working in a milk station. We served milk and food to mothers with little children who were underweight. Each month they paid me 250 Thai Baht ($12.50), just enough for me to buy something like laundry soap and shampoo. Mostly, I didn’t have money at all.”

“We could plant and grow vegetables around the small area where we lived in camp, but gardening outside the boundary of camp, they did not allow. We could only grow a little, not as much as we could in Laos. I worked to give out food at a distribution center in camp, but only to volunteer.”

For most, the only alternative to earn even a small amount of money was as field labor for Thai farmers outside the camp, and those who did so had varying experiences:

“When we arrived in Thailand from Laos, we suffered from poverty but the Thai residents there pitied us so they gave us jobs and they also gave us food when we worked for them.”

“Since my husband came to Thailand first, he did a lot of work for the Thai people in order to get food so we had extra food in the camp.”

“Sometimes you could go to work at a farm for Thai people, cut their wood for 20 Baht ($1) for the one day’s work. I did not work outside camp much when I was in Ban Vinai, because sometimes the people who hired workers cheated them out of money. I only worked one time for the Thai for a while. They gave me 400 Baht ($20) but it was supposed to be 800. They only gave half. Anyway, I used the money to buy food.”

Several of the folks we interviewed said how much of a difference getting even a small amount of money in the camp made in their daily life. During crackdowns by Thai authorities, when refugees were not allowed out of camp, it was devastating as they had no access to their garden plots, and lost a desperately needed food source for their families.

“From 1980 – 84, the Thai people who ran the camp allowed us to leave the camp to go to the market in town or to work at a farm outside the camp. It was nice to have this type of freedom, but because too many people abused the privilege – by allowing people who weren’t registered into the camp or by cutting down others’ wood – they stopped this practice by digging a big trench with barbed wire around the camp. It made me mad – it felt like we were treated like animals.”

Mrs. Ying Thao, who also came to live in Minnesota, told about the challenges of starting a business in camp:

“When I first came to camp, I made incense and tofu to sell. A bundle of incense took a long time to make and sold for only two – five Thai Baht, (10-25 cents) and tofu was hard work to make, so we eventually learned how to sew paj ntaub and made most of our money from those.”

(If Ban Vinai and Chiang Kham camps had an “industry”, it was mass production, by hand, and the marketing, sales and export of paj ntaub, the subject of an upcoming installment in this series.)

*This series of articles about the Hmong refugee and resettlement experience are part of our project to develop educational materials in Hmong and English, and traveling photo exhibits for schools and organizations in Minnesota, to help preserve Hmong heritage and history. This project will support our work in Asia. Please take a look: https://www.minorsasia.org/

Text and photos Copyright by Minors, a 501 c 3 organization based in Saint Paul, working since 1990 to support Hmong and other highland ethnic minority children at remote mountain schools in Viet-Nam and Laos. From the early 1980s onward we provided resettlement and other assistance to hundreds of orphaned Hmong children at Ban Vinai, Chiang Kham, Panat Nikhom and Wat Thamkrabok refugee camps in Thailand. 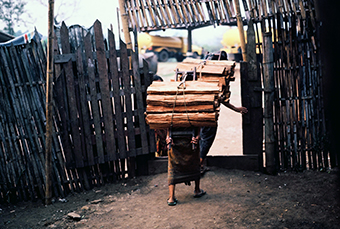 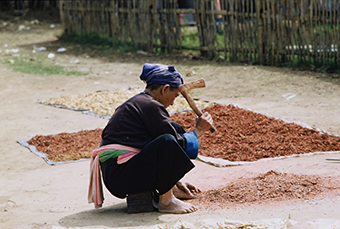