This is the eighth in a series about the Hmong refugee and resettlement experience, part of a project by Minors*. Photos are from Chiang Kham and Ban Vinai refugee camps, northern Thailand, in the 1980s. Text and photos Copyright by Minors.

Hmong Shamanism, and other traditional healing methods and herbal remedies will be described in a future installment, as we continue to interview the folks who were there.

Ban Vinai Refugee Camp Hospital is the compound of long buildings at center right, the main entrance to the camp and a Thai market are center left in this photo. The hospital was in the camp’s Center 1, and refugee housing in Centers 6, 7 and 8 are in the distance, at the base of the hills.

The buildings on the far right housed hospital administrative offices, classrooms for medics, emergency treatment, out-patient rooms and a pharmacy.

The buildings at center of the compound were wards for adult care, ones at the far left were pediatric wards.

The hospital was staffed by foreign humanitarian organizations, for a time in the early 1980s under the Minneapolis based American Refugee Committee (ARC), and later by a Dutch organization, ZOA, among others.

On one of the adult wards, family members visit patients all day, and usually a family member will stay all night, sleeping nearby on the floor or sometimes under the small wooden beds.

The adult wards were usually quite full of patients with a variety of illnesses and infections. More serious cases were transferred to the Loei provincial hospital, or in extremely serious cases, to Bangkok.

In our interviews we hear frequently how family members were an intricate part of the daily care for patients. And we hear of the tremendous challenges faced by patients due to lack of medicines or specialized treatments, the unsanitary conditions in the crowded camp, the difficulty of access to clean water, and adequate food, all obstacles to recovery.

A young malaria patient’s mother cooked food on a fire nearby and brought her daughter lunch at the pediatric ward. Refugee patients’ families provided their food and personal needs.

By early evening the pediatric ward was crowded as parents and family members came to sleep with their children and provide them with care during the night. Many young and weaker children died on the ward in the early years of the camp. Deaths were a nightly occurrence.

But the pediatric ward was somewhat cleared out for the middle of the day, as parents would take their children outside for fresh air, whether or not they were connected to an IV drip.

Other children were much too ill even to leave their bed. A young boy was cared for by his father. Hmong medics who were trained in Laos or in camp provided day to day care on the wards, with supervision by American, Irish, Australian, Philippine, and Finnish nurses and doctors.

Construction of the first Public Health Clinic in Ban Vinai camp, in 1980, under supervision of a camp leader, Mr. Ying Vang, a future Minnesotan.

This clinic was operated by ARC. Other agencies, such as International Rescue Committee, and Handicap International also provided care for outpatients.

A young outpatient recently treated for skin infection at the public health clinic.

Richard Harruff, a physician with the American Refugee Committee screened newly arriving Hmong families from Laos as they crossed under the fence into the Thai police holding center. Refugees were held under police detention before being allowed to enter Ban Vinai camp, several miles into the interior of Thailan.

A nurse from Finland treating children for infections at the police center at Pak Chom, at the Mekong River, several miles and several days away from Ban Vinai camp for new arrivals as they await screening and registration.

At an inpatient compound in camp, a French nurse attended a double-amputee patient.

Other than the free pharmacy at the camp hospital, there was the option of purchasing Thai and Chinese remedies, salves and ointments, available here on a mobile store, along with flashlights, batteries, lighter fluid and toothpaste, for those who could afford it, which was not most folks.

Then as now in southeast Asia, it is challenging to know for sure if the labels and dates on any medicines are real or dependable. This cart was parked on the main soccer field in camp, classrooms of the camp’s primary school are in the background at the foot of the hill.

These photos and interviews about the Hmong refugee and resettlement experience are part of our project to develop educational materials including books in Hmong and English – and traveling photo exhibits for schools and organizations in Minnesota, to help preserve Hmong heritage and history. This project will support our work in Asia. Please take a look.

*Minors is a 501c3 organization based in St. Paul, working for more than three decades to support Hmong and other highland ethnic minority children at remote mountain schools in Viet Nam and Laos, and in the 1980s providing resettlement assistance to orphaned Hmong children and other vulnerable refugees at Ban Vinai, Chiang Kham and Panat Nikhom camps in Thailand. 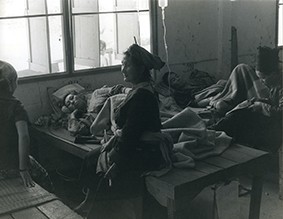 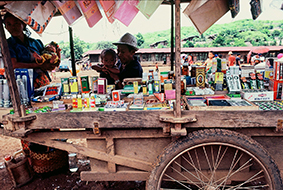