MINORS ASIA – #7 In A Series For Hmong Times – The Basics: Supplemental Food

This is the seventh in a series about the Hmong refugee and resettlement experience, part of a project by Minors*. Photos are from Chiang Kham and Ban Vinai refugee camps, northern Thailand, in the 1980s. Text and photos Copyright by Minors.

In our previous installment of this series (Basics: Food) we told of our interviewees’ struggles with finding food during their escapes from Laos, and the meager rations for those who survived, once they were registered, in the refugee camps of northern Thailand.

Those inadequate rations were all that most families had for nourishment, and thousands of others did not even have food (or water or housing) rations. These folks we will hear from in a later installment of this series.

To supplement the rice, occasional meat and vegetables that the UN rations provided, there were various means, some of which are shown in these photos, taken in Ban Vinai and Chiang Kham refugee camps.

Next to a pond in Ban Vinai in 1980, well-attended vegetable gardens thrived for a few families living nearby, and a father hunts for small game with his crossbow. When the camp population swelled in subsequent years, both land for gardens and hunting opportunities became scarce.

In Chiang Kham camp, space was excruciatingly limited, but some women managed to create small garden plots for extra vegetables at the camp’s boundary fence. Precious drops of water from hanging laundry added much needed moisture as water was tightly rationed as well.

Some refugees were able to bring money or silver from Laos when they fled, and for them and for others who had relatives already resettled abroad who could send money, several makeshift thatch and bamboo market stalls in camp sold vegetables, fruit and sometimes even fresh fish and meat, bought from Thai traders. The market sales force was comprised of refugees; the wholesalers were local Thai farmers and truckers. But most in camp had little spending power, so customers in the markets were relatively few, for a settlement of tens of thousands.

Candy and such sweets in the market were rare, of questionable age and dubious quality. A more common treat, if a child were lucky enough, was fresh sugarcane from nearby fields, cut and brought to camp for sale. Otherwise skilled boys with their self-made slingshots hunted birds and caught frogs and small fish and trapped insects, for extra protein.

Occasionally local Thais might bring a truckload of cucumbers or cabbages, which were then sold at various places in camp, and were a welcome addition to the diet for those who could afford such luxuries.

Other Thai merchants brought in watermelon and other fruits in season, but these were for most prohibitively expensive. Now and then in the hot dry season, from March to June, an ice cream cart could be seen around camp, a luxury only a few could afford.

Meat, fish and produce along with other perishables presented a great problem for storage in the tropical heat, as none of the 40,000 – 50,000 residents in camp had electricity, so refrigeration was unheard of.

Our interviews have brought out many stories about these and other challenges regarding food security in the camps and beyond – stories about food related challenges on the cross country bus journey and in the transit camp in the south of Thailand, aboard the long flights and in the transit airports from Asia to Minnesota. And we hear many tales, some frustrating and some hilarious, about getting acquainted with kitchens and supermarkets in the U.S.

*Minors is a 501c3 organization based in Saint Paul, working for more than 3 decades to support Hmong and other highland ethnic minority children at remote mountain schools in Viet-Nam and Laos. These photos and interviews about the Hmong refugee and resettlement experience are part of our project to develop educational materials including books in Hmong and English, and traveling photo exhibits, to help preserve Hmong heritage and history. This project will support our work in Asia. 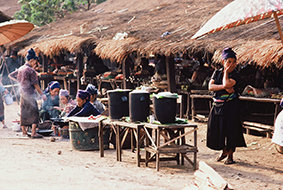 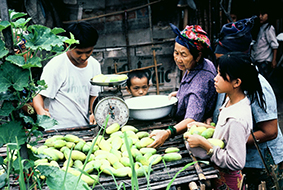