MINORS ASIA – 4th In A Series For Hmong Times The Basics: Shelter

This is the sixth in a series exploring the refugee experience of Hmong families who eventually resettled in Minnesota and Wisconsin and around the U.S. after the wars in Southeast Asia.

Photos here (Copyright by Minors*) illustrate the different kinds of housing in Ban Vinai camp in northern Thailand, where most Hmong refugees were held, some for months and others for a decade or more, before resettling to the U.S. and other third countries, transferring to other camps, or returning to Laos. These images are from 1980-86.

In Ban Vinai refugee camp there were, spread out eventually over nine sections or zones (called Centers), nearly 400 buildings, with around 4,000 rooms, which were for families, so rooms typically had from six to twelve family members.

The numbers of extended family members would greatly increase when new arrivals came from Laos, who would move in with relatives until assigned housing; unless they were unauthorized to be in camp, in which case they were not assigned housing, or rations, or anything.

This would necessitate sharing of space, food, water, mosquito nets, clothing and so on, a tremendous burden for families who had little of each.

A majority of the buildings were wooden of this type, and had 10 rooms each. Being well and strongly built by a contingent of early arriving Hmong refugees, they were however largely on stilts due to the hilly terrain of the camp, offering less than ideal stability and safety, considering the large number of occupants. (Center 3)

By mid-morning in the dry season folks were already outside seeking shade from the heat, as the buildings had metal roofs absorbing sunlight all day, with hot air underneath all afternoon and evening on windless days. They felt like ovens until late at night.

The second most common multi-family housing structures in the camp, cement block buildings also heated quickly in the dry season, but during the winter months were cold all day and night, and in the rainy season humid as a cave. Dank and dark, they were the second least favored of the housing types by most folks, hardly any of whom had any choice. (Center 4)

For oppressive heat in the summer months, April to June, and for numbing cold in the winter months (November to February) these all-sheet metal buildings were by far considered the unluckiest of dwellings. (Center 9).

In the early years of the camp, from mid-1970s to early 80s, some families had the resources to build their own houses, more in the traditional Hmong style, as this dwelling on the hill overlooking most of the camp. In subsequent years this hillside became dense with buildings as the camp population swelled to nearly 50,000.

Eventually over the years, a couple thousand families chose to build their own houses, in traditional style, if they had the resources to buy, barter for or gather materials, or were lucky enough to have relatives resettled abroad who could send money. (Center 6)

Bamboo walls and thatch roofs were the most common, though all supplemental materials available were used as well, where practical, as here with Thai advertisements. (Center 1)

The traditional houses were closely spaced on scarce land in the camp, and families were likewise close. (Center 2)

As with all articles in this series, please contact us if you know someone in the photos so we may provide them with their photo and hopefully hear their stories.

*Minors is a Minnesota based 501 c 3 Organization working to improve access to education for Hmong and other highland ethnic minority children from remote mountain villages in southeast Asia. 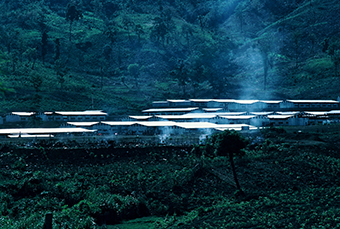 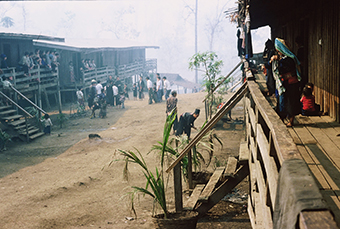