MINORS ASIA – 3rd In A Series For Hmong Times

In this installment we are taking a look at the general layout of the refugee camp Ban Vinai, through which passed most Hmong people who came to the U.S. The camp was in northern Thailand, several miles inland from the Mekong River which forms the border with Laos, from where the Hmong fled in the years following the wars in southeast Asia.

Photos here, all copyright by Minors, show Ban Vinai Refugee Camp in the mid-1980s, around the time of the U.N. report excerpted below. The report explains well the administration of the camp, and as can be seen it necessitated a high degree of cooperation between the Thai government, the U.N. and the Hmong refugee leadership, and a clear division of responsibilities among these same entities.

Ban Vinai Refugee Camp in Pak Chom District, Loei Province, was opened in 1975 with the camp population of 12,000, As of today the population stands at 45,000. This is the most populous UNHCR involved refugee camp in the East and the South-East Asia.

Following the Royal Thai Government’s policy of camp consolidation, a total of some 9,OOO hilltribe refugees were transferred from Ban Nam Yao, Nan Province, to Ban Vinai during the period of May 1983 – May 1984.

Almost all refugees have their “home of origin” in Xieng Khouang province, whereas Ban Nam Yao group in Sayaburi province.

The professional background of both groups, Xieng Khouang and Ban Nam Yao, is also different: The former were military servicemen, the latter being farmers.

Ban Vinai refugee camp is situated in a valley which is 1,000 rais (400 acres} with an elevation as high as 221 metres above sea level. The climate is hot between March and May, and cold between October and February. The temperature reaches 45 degrees Celsius (113 degrees F) during the hot season and drops down to 0 degrees during the cold season. There is usually heavy rain during the rainy season (June to September).

4.1 The MOl (Thai Ministry of Interior) administrative committee at the Provincial level consists of the Governor, who is the chairman, and 13 other members. The camp commander is one of the committee members and also acts as the secretary to the committee. The committee’s meetings are regularly held in the camp. A total of three commanders have been serving the camp since 1975.

The office is divided into 11 sections) including administration, registration and TD cards, control and transportation, education, social welfare and skills training, etc.

The camp commander is the administrative head and the MOl representative in the camp.

The camp is divided into 9 centres which are further divided into 33 quarters, 395 Buildings and 3,950 rooms. In addition, there are some 2,000 houses constructed by refugees themselves.

The UNHCR proceeded with assistance activities in Ban Vinai in 1975. As of today, the UNHCR office in Ban Vinai is composed of 11 staff members headed by a Field Officer who is the fifth UNHCR officer responsible for Ban Vinai since 1975.

Under his supervision, seven staff members are working for the Durable Solutions Team. The main function of the team is to assist refugees in finding a permanent solution for their future, either resettlement to a third country or repatriation to their home country. They are updating bio-data records of all refugee families, submitting cases of resettlement or repatriation to UNHCR Bangkok office, helping delegations of resettlement countries process candidates for resettlement, disseminating information relevant to the durable solution, providing needy refugees with counselling services through home visits, and responsible for inter-camp and medical emergency transfers.

Three other staff members assume responsibilities for Assistance and Protection. They are closely monitoring tile UNHCR funded projects such as provision of food/household items, site maintenance, construction, supplementary feeding, ambulance services, education and medical supplies. In relation to the programs implemented by the voluntary agencies, the UNHCR is playing a role of the coordinating agency. With regard to Protection, the UNHCR has close contact with the Thai local authorities including the Camp Commander’s Office for solving problems of new arrivals, criminal cases and internal security problems.

In subsequent installments of this series we will look at the challenges of daily life in Ban Vinai as well as some of the other Hmong refugee camps, including Chiang Kham, Nong Khai, Panat Nikhom, and Wat Thamkrabok, Thailand.

This series is part of a book/exhibition project by Minors, a Saint Paul based organization working to improve educational access for Hmong and other highland ethnic minority children in northern Viet-Nam and Laos. 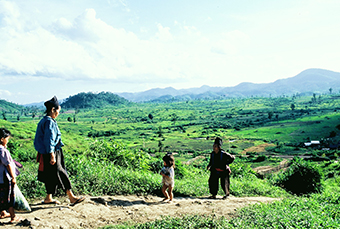 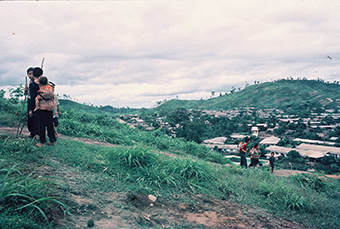