Ban Vinai, the largest Hmong refugee camp in Thailand, was located a few miles inland, just across the Mekong River from Laos in northernmost Loei province, which because of various geographic vagaries, was known by Thais as the province that was the coldest in winter and the hottest in summer. One hot day in camp in the dry season became much hotter when a fire broke out around noon in one of the long wooden buildings that housed up to ten families, some with the same number of family members.

The afternoon temperature was around 100 degrees, and it was breezy early in the morning, so everyone looked for signs of wind as the fire quickly grew and all wondered one thing: where will the wind take the fire? Good luck prevailed over the winds and they died down, but the fire grew in intensity anyway, as many roofs were thatch, and the wooden structures were dry after many years. It was a tinderbox waiting to explode.

The well-trained Ban Vinai refugee volunteer fire brigade was on the scene in a flash. They clambered onto the roofs of neighboring buildings and took up position as the camp’s lone fire truck, just a tanker truck with a pump, managed to pull into position among the narrow winding footpaths, and the fight was on.

The firefighters fought without concern for themselves, and eventually brought the fire to a standstill, with the loss of just a couple buildings that were totally consumed by the leaping flames, and fortunately there was no loss of life, and no known injuries*.

Other than the lightning speed and heroic efforts of the men and boys in the fire brigade, one of the most astounding sights for a westerner witnessing the conflagration was the totally calm and seamless reaction of the families affected, and their neighbors. Nobody seemed to be panicking, there was no screaming or running, just a steady and quiet determination to do what needed to be done: survive and save who and what can be saved.

Seemingly oblivious to the raging flames, throngs of men, women and children fell into two orderly lanes of foot traffic between the burning houses. Wherever they could find a space, families plopped down the belongings they managed to save, and watched their houses go up in flames, becoming refugees fleeing a refugee camp.

If the winds had churned up, if water had run out before it did, if the teenagers and young men had not leaped fearlessly and without any regard for their personal safety onto the roofs, the fire would have most certainly destroyed the whole camp of tens of thousands, with many injuries and deaths. It turned out to be a pretty good day, considering.

*For the books and educational materials which we are developing, we are hoping to hear from anyone who was there and remembers the fire in Ban Vinai camp, to fill in the gaps of the story.

Text and photos Copyright by Minors, a 501c3 organization based in St. Paul, working since 1990 to support Hmong and other highland ethnic minority children at remote mountain schools in Viet Nam and Laos. From the early 1980s onward, we provided resettlement and other assistance to hundreds of orphaned Hmong children (Menyuam Ntsuag) at Ban Vinai, Chiang Kham, Panat Nikhom and Wat Thamkrabok refugee camps in Thailand. 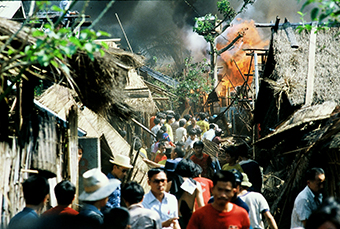 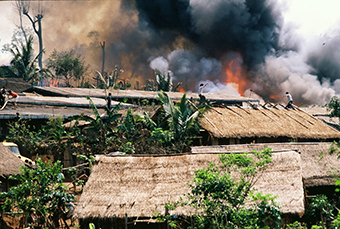