MINORS ASIA – #13 In A Series For Hmong Times – Funeral Scenes

Sleep in the Hmong refugee camp Ban Vinai was often interrupted by distant wailing and weeping that slowly seemed to get gradually closer and louder. Then one could hear murmurs of a crowd gathering in the dark. Then, after drifting back to sleep, sometime before dawn a drum would start thumping a steady beat. It meant another death, grieving and mourning would follow in the days ahead. Sometimes quite a few days.

Sometimes the body of the one who passed was laid on a raised bamboo platform in the house or hut of the deceased, especially if it was the rainy season, other times outside in the tropical sun. Except for friends and family, daily life in camp went on for most people, even in the neighborhood of the funeral, but every now and then paused when the breeze changed and the powerful odor of a decomposing corpse would drift by, reminding all of their own mortality.

Every day there were funerals at Ban Vinai camp, it was, after all, a city of tens of thousands of residents and for everyone, children included, death was a part of daily life. There were of course no funeral homes, no funeral directors, no embalming, no hearses or any of those things we here and now think of as part of a funeral.

The funerals and ways of grieving for the elders who died were full of ritual and customs that must have come down through the centuries. The funerals for babies and very young children who died every night in the pediatric ward of the hospital or at home were less about ritual and more of just stunned, somber silence.

When the uncles of a young child who died, perhaps of malaria or respiratory failure, used their traditional Hmong knives to carve a coffin, even the youngest children came to watch. It was a common sight along the camp’s winding pathways between thousands of bamboo and thatch huts.

As recalled by Kha Xiong, who resettled in Minnesota, during our interview*:

“When a person died, it was best to do the funeral as soon as possible due to the lack of any way to preserve the body. But we also needed to consult the Hmong lunar calendar to make sure we were picking the best date as well as avoid any anniversary death or burial dates. Sometimes funerals could get pushed out as far as ten days. Having the funeral this far out brought with it a different level of emotions and exhaustion as you had to deal with the physical state of the body in addition to your feelings of grief and loss.”

Many of the folks we talk with about death and funerals in the refugee camps lament to this day they did not have the proper accoutrements and could not afford the customary food for mourners, this being probably the most important ceremony, and that added to the sadness of the family.

Ban Vinai had no formally designated cemetery, but one eventually established itself just outside camp, behind Center 4. There were 8 Centers, or Sectors, of the camp, so the cemetery became known as “Center 9”, dark humor in a way, but also designating perhaps that the deceased were still among the living, just in another sector.

Later, when the camp population exploded with new arrivals and lots of births a new housing area was built, and of course became the new actual Center 9. This made for some confusion, and the inevitable jokes of course.

Text and photos Copyright by Minors, a 501c3 organization based in St. Paul, working since 1990 to support Hmong and other highland ethnic minority children at remote mountain schools in Viet Nam and Laos. From the early 1980s onward, we provided resettlement and other assistance to hundreds of orphaned Hmong children (Menyuam Ntsuag) at Ban Vinai, Chiang Kham, Panat Nikhom and Wat Thamkrabok refugee camps in Thailand. 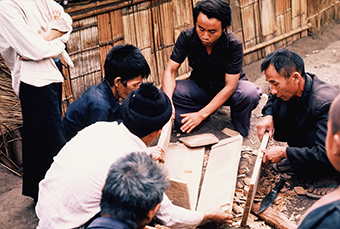 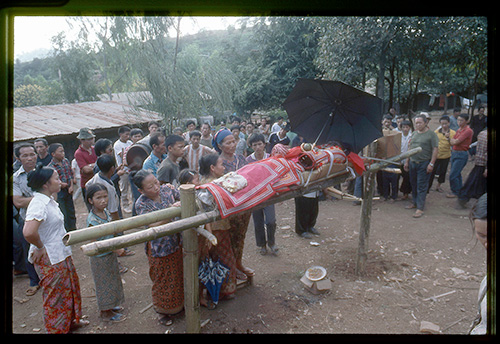