Walking through the Hmong refugee camps of Ban Vinai and Chiang Kham in the late afternoon, could be heard the cry of hungry babies, the wailing of mourners, roosters fighting, the crackling fuzzy public address system in a language few understood, hammers pounding on anvils in the blacksmith shop; different sounds down every path and around every corner.

But the most welcomed sounds heard when winding through the neighborhoods were the squeals of laughter of children at play. There were no video or electronic games in those days forty years ago, there wasn’t even electricity for the tens of thousands of camp residents. There were no parks or playgrounds, a child with a toy was rarely seen, only perhaps a cheap plastic doll or gun, as few parents had money to buy what was available in the Thai market outside camp.

Mostly it was left to the kids to make their own playthings and games, and they did so creatively, using anything available. Along a barbed wire fence one saw girls happily playing jacks, using gravel, boys shouted as they fiercely competed at Ntaus tuj lub (hitting spinning tops) by carving their tops from pieces of wood, shuffleboard and hopscotch in many variations were played using flip flops, squares and boundaries drawn in the dust.

Rubber bands were used by boys as miniature slingshots, and as rewards for winning all kinds of games. Young boys proudly wore their bracelets of rubber bands on their wrists as trophies; the most skilled had them up to their elbows.

Younger children enjoyed finding ways to emulate their parents and daily camp life as it unfolded before them: two girls walking with a long a stick between them to carry a small plastic bag, some make-believe cargo, a girl mimics her mom, and carries a doll on her back.

Using a stick, and banging a tin pot lid for a gong and a homemade wooden stool, a three and four-year-old intensely played out a shaman ceremony.

Longing for pets, children would capture grasshoppers, rats, lizards, squirrels, birds and other creatures and use strings for leashes. Competitions would ensue; more rubber bands would be awarded.

There were many hazardous spots in the camps, exposed drainage ditches and rickety fences used to draw children as they were uncrowded places in crowded camps, but these were risky places to play and injuries were frequent.

As we continue to interview folks for our books we have heard from more than one source who was in the camps as a youngster, that despite all the sadness, illness, death, desolation, uncertainty, lack of food and water, and rough living conditions, the strongest memories of camp life are filled with having fun. This is true of some men recalling their boyhoods in camp; mainly those who managed to grow up without serious injury or illness. Few women say this; their girlhoods in camp were mostly just plain hard, spending so much of their day with a load on their backs, either water buckets or younger siblings. But when they did have time and a chance to play with friends, girls did it with great excitement.

Parents and grandparents and sisters had plenty of grinding daily chores, but boys often had opportunities to work in camp; if there was heavy lifting to be done they were the labor force, and if lucky were assigned work duties more like jobs, as security, fire brigade, medics.

The playtime for older boys and young men was in late afternoon until dusk, volleyball being the most popular recreation, along with soccer, and the main field in camp was occupied by them until after dusk, when play stopped, as there were no lights.

When girls wanted to play, rubber bands were strung together to make jump ropes. Mrs. Dee Vang who now lives in Saint Paul, is one of those women who recalls some fun amidst all the work of young girls in camp:

“Our favorite games were the rubber band games and the rock games. Every night we’d look for kids to play hide and seek with. I remember playing rubber band jump rope with my neighbor friends. I was so happy when I was the one who could jump highest and won the game.”

Photos were taken in the 1980s in Ban Vinai and Chiang Kham refugee camps. Article and photos are copyright by Minors.

Know anyone in these photos? Please ask them to contact us:

*This series of articles about the Hmong refugee and resettlement experience is part of our project to develop educational materials in Hmong and English, and traveling photo exhibits for schools and organizations in Minnesota, to help preserve Hmong heritage and history. This project will support our work in Asia. Please take a look:

Text and photos Copyright by Minors, a 501 c 3 organization based in Saint Paul, working since 1990 to support Hmong and other highland ethnic minority children at remote mountain schools in Viet-Nam and Laos. From the early 1980s onward, we provided resettlement and other assistance to hundreds of orphaned Hmong children (Menyuam Ntsuag) at Ban Vinai, Chiang Kham, Panat Nikhom and Wat Thamkrabok refugee camps in Thailand. 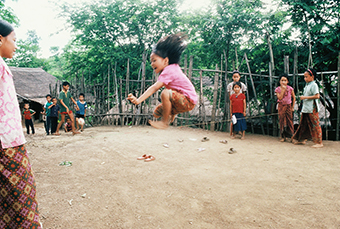 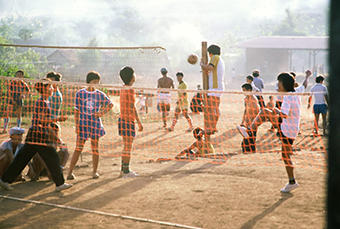