MINORS ASIA – #10 In A Series – The Paj Ntaub Industry

This is the tenth in a series about the Hmong refugee and resettlement experience, part of a project by Minors*. Photos are from Chiang Kham and Ban Vinai refugee camps, northern Thailand, in the 1980s. Text and photos Copyright by Minors.

Among the refugees in the camps of Thailand in the 1980s and 90s, whether from Cambodia, Viet-Nam or Laos, were many men and women who were highly skilled craft makers.

In a Vietnamese camp one was likely to find men selling hammocks they had tied by hand, in the Lao camps women weaved, in the Cambodian camps children crowded around visitors and aid workers hawking finely carved wooden souvenirs their parents had made.

But in the Hmong camps, such as Chiang Kham and Ban Vinai, the making of traditional Hmong Paj Ntaub (pronounced Pa Dao) became more than an individual pursuit. As the skill and intricate beauty of the embroidery became known, it evolved into an industry, family by family. Those in camp toiled for endless hours and cooperated by postal mail with their kin who had resettled in the U.S., forming sometimes roundabout methods to produce, export, market and sell their extraordinarily fine products, and most importantly, send back to camp the hard-earned income.

Many of the older women we are interviewing for our project* have recollections of the vital importance of paj ntaub in their daily lives at camp.

As Mrs. Nou Vang, now a Minnesotan, remembered, “We were so poor, we didn’t have any shoes or clothes. We came to camp so late, so we didn’t have a space for a garden, I sewed paj ntaub meka (story cloth American style) and regular nyias, (embroidered baby carriers). We got a little extra money, thanks to that.”

As there was no electricity for the tens of thousands of camp residents, at night moonlight or starlight was about it, and many women and girls were seen well into the evening outside their huts or buildings, on small wooden stools, bent over and squinting as they stitched away. By day entire families were often fully engaged as it was labor intensive and payment was meager and by the piece.

Mrs. Bee Ly of St. Paul told of the long hours and low pay in the business. “I had no money, and so only could sew paj ntaub. I would go borrow others’ paj ntaub to finish for them and when done, they would pay me. Depending on how dedicated you were, if you did it day and night and finish in a month or close to a month, I would get 200-300 Thai Baht ($10-15).”

Mrs. Pang Lee, who resettled in St. Paul, recalls how she eventually came to understand the economic impact embroidery had on her life, “I heard from a very young age that the needle (rab koob) was very important to our life, but I didn’t know what that meant. Later, the needle, such a small thing, helped support me and my children as I sewed paj ntaub to sell abroad.”

She went on to explain how the design and colors changed over time. “The sewing of paj ntaub was essential to the livelihood of the men, women and children in Ban Vinai. Our original paj ntaub were red and green, but when realized we could sell our work to feed and clothe our children, we had to change our colors and patterns to make them more marketable to foreigners. That is how we arrived at the blue and gray story cloths that you see so frequently today.”

Photos were taken in the 1980s in Ban Vinai and Chiang Kham refugee camps.

Text and photos Copyright by Minors, a 501c3 organization based in St. Paul, working since 1990 to support Hmong and other highland ethnic minority children at remote mountain schools in Viet-Nam and Laos. From the early 1980s onward, we provided resettlement and other assistance to hundreds of orphaned Hmong children (Menyuam Ntsuag) at Ban Vinai, Chiang Kham, Panat Nikhom and Wat Thamkrabok refugee camps in Thailand. 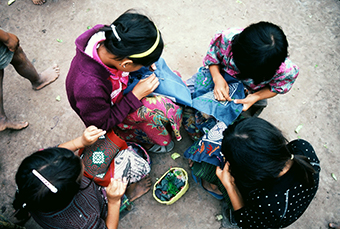 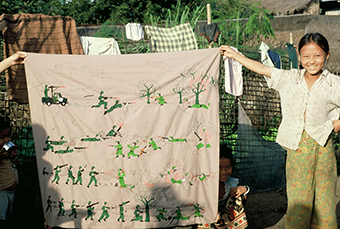