On Friday, April 27 and Saturday, April 28th, 20 residents of Maplewood gathered at the Maplewood Community Center for an event put on by the Minnesota Community Assembly. The assemblies were made possible by grants from the Hewlitt and Joyce Foundation and the Maplewood Community Assembly was conducted by a partnership between Hamline University and the Wilder Foundation. Previous assemblies had been conducted in Red Wing, Wilmar and Brooklyn Park.

Miriam Ziven, helped conduct the Maplewood Community Assembly and said, “The cities were selected to represent the past, present and future of the United States… how the space is changing.”

Jennifer Gilhoi, a Minnesota Community Assembly Communications Consultant, described the assemblies, “Minnesota Community Assembly is a series of community gatherings, spurs participants to rethink civic connections, imagine how local government might be designed for the 21st century and rebuild government to listen, understand and act. Assemblies average 50 participants over the course of several days, create policy recommendations for residents and elected officials and identify ways for local government to better serve their community.”

David Schultz, a political science professor at Hamline University, has been instrumental in setting a vision for the assemblies. He said, “The Minnesota Assemblies are important in so many ways. We are showing how, despite partisanship and political gridlock at the national and local level, people at the local level can still work together to solve problems. The Assemblies offer lessons in how individuals can make a difference and serve as role models for other communities across the country. Moreover, in doing these assemblies our goals were to recruit new voices – such as immigrants and people of color – and have a place at democracy’s table. We are hoping those who participated, including those who are Hmong and from Asian heritage, will feel empowered and ready to become leaders in their communities.”

He went on to say, “The communities participating in the assemblies exemplify the effects and challenges of significant shifts in demographics, politics and the economy. If you look at the four communities collectively, you’ll find that they represent four distinct pictures of America today. These four cities are role models, offering lessons in how to overcome polarization.”

Nou Yang of the Wilder Foundation attended the assembly said, “There was a little bit of Civics 101, but a lot of listening from our end.”

Ziven added, “We are not interested to come into a city and say we know what is best for you. We want to know how they prefer to have government act.”

One goal is to give the residents tools and training to made a difference in government. Xiongpao Lee, a community leader from the Brooklyn Park session, attended the Maplewood session and shared their assembly’s journey. They had recently meet with the Brooklyn Park City Council and made recommendations.

Topics that came up were barriers to participation including – transportation, safety, negative experiences, fear of change, motivation, lack of information and weather. City Manager Melinda Coleman attended the Assembly on Friday afternoon and is working directly with residents.

On Saturday, Gilhoi explained, “We used the caucusing method to create groups around individuals’ passions as they related to a particular one of the six principles in order to make recommendations for Maplewood. Sustainability, trust, participation, equity, strategic vision and transparency reflected the six recommendation categories the participants were naturally drawn to select.”

The goal would be that much like the Brooklyn Park Assembly, that this group would be able to make their recommendations directly to the city council.

Gilhoi summed up the Assembly, “After two intensive days in Maplewood, participants received a look at their specific government structure, connected with their local officials, built relationships among each other and shared their recommendations with their city. Minnesota Community Assembly, in collaboration with the Wilder Foundation, will create a summary report that will be available for all to access. And while nothing further is required of participants, the foundation has been set with potential to further the recommendations into action.” 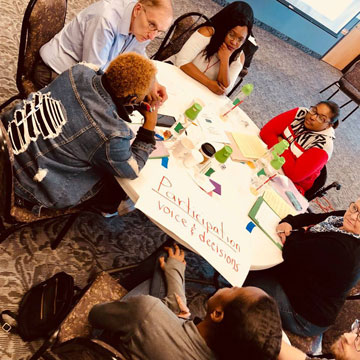 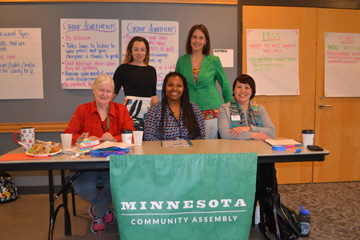