Lao and Hmong-American U.S. Secret Army veterans of the Vietnam War in Laos, and their refugee families across the United States, are lauding the passage, and seeking timely and appropriate implementation, of the “Hmong Veterans’ Service Recognition Act” by President Donald Trump and the Department of Veterans Affairs (VA), according to the Center for Public Policy Analysis.

“Final passage of the Hmong veterans legislation occurred when Senators Reed, Murkowski and Whitehouse jointly worked in bipartisan fashion to add the Costa-Cook-Murkowski Hmong bill’s language (HR 4716/S.1179) to the Military Construction, VA Appropriations Bill which passed the Committee in July 2017 and was eventually included in the larger Consolidated Appropriations Act of 2018, and signed into law on March 23 by President Trump; In the House, Congressmen Jim Costa (D-California), Paul Cook (R-California), Jim Langevin (D-Rhode Island), Devin Nunes (R-California) and over fifty Members of Congress cosponsored the Hmong veterans bill.”

“Among their missions, these veterans of the ‘Secret Army’ conducted raids on the Ho Chi Minh Trail and rescued downed American pilots. To help honor these veterans, I have supported the Hmong Veterans’ Service Recognition Act,” stated Senator Jack Reed.

“We are grateful to Senators Reed, Whitehouse, Murkowski, Tammy Baldwin as well as Congressman Costa, Langevin, Cicillini, and others for helping our veterans, and families, to pass this important legislation that we have worked hard to educate the Congress about for many years,” said Toua Kue, LVA, Rhode Island, President, and U.S. Secret Army veteran.

Major Cheurchai Vang, National President, of the Fresno, California-based LVA stated, “We thank the Congress for supporting us and passing this historic legislation that will help to properly honor, and bury, our Lao Hmong veterans at national cemeteries administered by the VA. We want to tell the American policymakers, including the U.S. Congress and VA, that this legislation is certainly long overdue, and we are grateful that it has finally passed, and President Donald Trump has signed it into law, and is implementing it with the VA.”

Cheurchai Vang continued, “Since 1961-1975, our Lao Hmong veterans fought shoulder to shoulder as brothers with U.S. Special Forces and CIA soldiers. America would have suffered an additional 100,000 casualties during the Vietnam War, if the Laotian and Hmong soldiers of the U.S. Secret Army in Laos had not fought as allies to help stop the invasion of the Royal Kingdom of Laos, and South Vietnam, by Soviet-backed Communist North Vietnam and Marxist Pathet Lao guerrillas. We saved many downed U.S. Air Force, Navy, Army, and Air America pilots, with the Hmong and Laotian forces sometimes losing 125 men for every American life we saved.”

Pang Mang Thao, President, LVA, Minnesota, stated, “We sacrificed and traveled to Washington, Capitol Hill, and Arlington National Cemetery, many times with our Lao Hmong veterans, and cultural dancers, on buses and airplanes, to request that we be honored with this burial benefits legislation. The Lao Hmong community is happy that after many years it has passed Congress and is law.”

“We envisioned and hoped that one day our U.S. Secret Army veterans would be given these final burial honors with their American military advisors,” said Wangyee Vang, Founder and President Emeritus LVA. “This is why we first asked Congress to recognize and remember the Lao Hmong veterans’ unique sacrifices.” 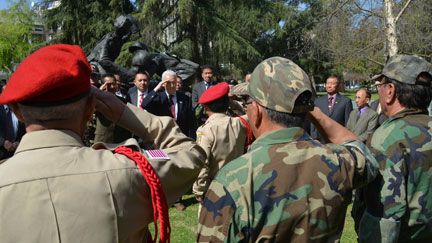