Washington, D.C. and Arlington, Virginia, May 17, 2018. Lao and Hmong veterans of the Vietnam War in Laos are being honored at national ceremonies and policy events according to the Center for Public Policy Analysis (CPPA) in Washington, D.C.

The following is the text of a press release courtesy of U.S. Senator Sheldon Whitehouse regarding the ceremonies and events:

Lao- and Hmong-Americans from Rhode Island and around the U.S. gather to lay wreath at Lao Veterans Monument.

Senator Sheldon Whitehouse (D-RI) honored Lao- and Hmong-American veterans who aided the United States during the Vietnam War at a wreath-laying ceremony before Arlington Cemetery’s Lao Veterans Monument today. In remarks, Whitehouse offered a remembrance of the heroism of Hmong and Lao soldiers during the Vietnam War, which claimed tens of thousands of lives in Laos. Whitehouse was joined by several Lao and Hmong veterans and their families, including a large contingent from Rhode Island.

“We will always remember the bravery of those Hmong troops and their dedication to fight for democracy and to protect the lives of so many young Americans at war in Southeast Asia,” said Whitehouse, whose father served as Ambassador to Laos during the Vietnam War and later joined the effort to recognize Lao- and Hmong-Americans’ service.

Earlier this year, the President signed into law Senator Lisa Murkowski (R-AK) and Whitehouse’s Hmong Veterans Service Recognition Act to allow the burial of naturalized Lao and Hmong veterans in veterans’ cemeteries around the country.

The ceremony took place in front of a plaque dedicated to Hmong and Lao veterans. “It is a fitting honor for those brave combat veterans that they lie beside old comrades-in-arms, a way of keeping the promise inscribed on this memorial plaque, which pledges that the Hmong and Lao veterans’ ‘patriotic valor and loyalty in the defense of liberty and democracy will never be forgotten,’” Whitehouse added. The Lao Veterans of America (LVA) organized today’s wreath laying. Members of the LVA include surviving Lao- and Hmong-American soldiers and airmen who served during the Vietnam War. The LVA is active in states around the country that are home to Lao and Hmong communities, including Rhode Island.

Whitehouse’s as-prepared remarks are below:

“Good morning, and thank you for inviting me to join you today in this hallowed place.  We come together here with many memories,” said U.S. Senator Sheldon Whitehouse.

“As a young man, I lived with my father while he served as U.S. Ambassador to Laos.  I came to know it as a heartbreakingly beautiful country, with lovely, kind people, into which our international contest with communism violently intruded.

“The goal of the U.S. in Laos at the time was to prevent North Vietnamese forces from using Laos as a supply line for attacks on South Vietnam, along what was known as the Ho Chi Minh Trail; and to prevent Laos itself from falling under Communist domination by the Pathet Lao forces.”

“The legendary Hmong military leader, General Vang Pao, operated out of a base at Long Tieng in the mountains of Laos. He told the New York Times in 2008 that ‘There were three missions that were very important that were given to us and to me. One was stopping the flow of the North Vietnamese troops through the Ho Chi Minh Trail to go to the south through Laos. Second was to rescue any American pilots during the Vietnam War. Third, to protect the Americans that navigated the B-52s and the jets to bomb North Vietnam.’”

“After the war, thousands of displaced Hmong refugees were obliged to flee Laos.  They fled into Thailand, to countries in Europe, and – in many cases – to the United States. My state of Rhode Island is proud to have had many settle and build their lives in our communities.”

“The Hmong Veterans’ Service Recognition Act passed into law this year, finally allowing naturalized Hmong- and Laotian-American veterans to be buried in U.S. national cemeteries. In particular, I want to thank my fellow Rhode Islander Philip Smith, of the Lao Veterans of America, for his determined advocacy on behalf of Hmong and Lao veterans.”

“Twenty-one years ago, the Clinton Administration authorized a plaque to be placed at Arlington National Cemetery commemorating the valor of the Lao soldiers who aided American forces during the Vietnam War. It is a fitting honor for those brave combat veterans that they lie beside old comrades-in-arms, a way of keeping the promise inscribed on this memorial plaque, which pledges that the Hmong and Lao veterans’ ‘patriotic valor and loyalty in the defense of liberty and democracy will never be forgotten.’”

“After my father retired, he heard that local opposition had arisen to a proposed Lao temple not far from here in Virginia. He went with his military aide and CIA station chief from the Laos days to testify at the local hearing. The military aide was General Richard Trefry, then the commander of White House military operations, who in full military regalia testified that without the courageous Lao resistance, led by Vang Pao out of the base at Long Tieng, there would be one thousand more American names on the Vietnam War Memorial.”

“It is with that sense of abiding gratitude that we gather today. We will always remember the bravery of those Hmong troops and their dedication to fight for democracy and to protect the lives of so many young Americans at war in Southeast Asia,” Senator Whitehouse concluded. 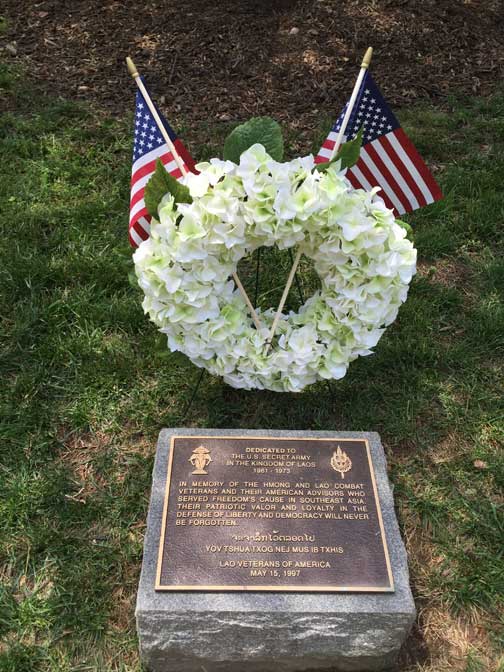 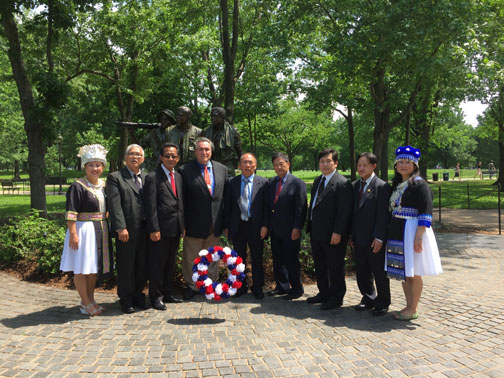