Kou Yang, a professor emeritus of ethnic studies at California State University, Stanislaus, is also originally from the area of Sayaboury, Laos, and recently published his latest book on the history and impact of the region on the Hmong world.

Sayaboury, the territory taken back from victory, is the only province of Laos totally situated west of the Mekong River. The name Sayaboury can be divided into two parts: Saya and Boury. Saya is derived from ‘jaya’ in Sanskrit – meaning Victory and Boury is derived from the Sanskrit word, Puri or Pura meaning city, state or territory. It has a long history of diverse people and rich cultural heritage with fertile agricultural lands full of various flora and fauna. Because of these characteristics, almost every mountain, cave, natural wonder, and village has its own set of folk stories or legends, adding humanity, spirituality, mystery and supernatural elements to this land. The indigenous people of Sayaboury, such as the Khmu, Phay and Tong Leuang, have lived in this land for at least 10,000 years, and the famous and venerated Phra That Xieng Lom or Xieng Lom Stupa in Sayaboury was built more than 700 years ago, indicating that this land has seen many rulers come and go, many civilizations rise and fall, many eras of peace and many periods of war.

Geographically, Sayaboury is situated on the westside of the Mekong River, sharing its border with six Thai and four Lao provinces. It has two geographical regions: north and south. The north is dominated by mountains, such as the Luang Phrabang mountain ranges which cover most of the northern and western parts of the province. Pha Xang Mountain in Sayaboury district is the seventh highest peak in Laos. Unlike the north, the southern region of Sayaboury is dominated by plains, valleys and hills, having the best agriculture lands of the province.

Situated in the tropical zone, Sayaboury’s diverse flora and fauna gives it the historical and cultural name as the Province of a Million Elephants. There are eleven districts: Boten, Hongsa, Kenthao, Khop, Ngeune, Parklay, Phiang, Thongmixay, Sayaboury, Xienghone, and Saysathan. The book highlights the uniqueness of each of these districts, including the history and folk legends of the diverse people of more than 389,139 people from 33 ethnic groups, who have all contributed to the making of modern Sayaboury. Additionally, another special tradition of these diverse ethnic groups is their long and rich elephant traditions. The annual elephant festival in Sayaboury Town is an example of the evolvement of their elephant culture and tradition.

Lastly, the book includes legends and oral accounts that explain the physical and spiritual order of natural wonders and manmade monuments. These stories add folk culture, beautiful traditions, mysterious belief systems and humanistic perspective to the Land of Million Elephants and its diverse people.

His articles appear in the Journal of Asian American Studies, Ethnic Studies Review, Asian Pacific Migration Journal, Hmong Studies Journal, Journal of Guizhou University for Nationalities and Journal of Hubei Institute for Nationalities. He has also contributed to several books, including The Hmong: An Introduction to Their History and Culture, Emerging Voices: The Experiences of Underrepresented Asian Americans, Hmong Migration, Passage, and Hmong Forum.

Sayaboury – Land of a Million Elephants of Laos is from HER Publisher (herpublisher.com). To get a copy of Dr. Yang’s latest book, please visit the Hmong Education Resources Publisher at www.herpublisher.com. 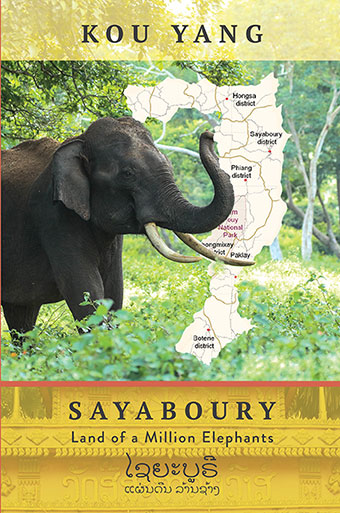