In 2009 Keng Chris Yang started playing guitar. He told Hmong Times, “At first I was just a singer, and my younger brother was my guitar player. One day we had this show that we were supposed to play, but he wasn’t there and I couldn’t perform because I didn’t have my guitar player so I decided I needed to learn so that wouldn’t happen again.”

His journey began. “At first I started with self-teaching. Then I was able to get into music college and received formal training.” Yang attended the McNally Smith College of Music. Which has since closed down.

“At first it was just my little brother who inspired me, and I was surrounded by friends that played for fun. But I didn’t want to play for fun anymore I wanted to teach and travel.”

With this goal in mind Yang began to hone his skills not only as a guitar player, but as a teacher. He partnered with the Center for Hmong Arts and Talent (CHAT). “I have been teaching regularly during the summer through CHAT. During the winter I work at different gigs.” And continues to teach. He has also worked on programing for PBS Kids and Frog Lab. “We do a show that helps promote amphibians and nature.” They have played at the State Fair for Hmong Day and Waterfest in Phalen Park.

“We not only play, but help set up concerts too.” He likes being able to help other musicians and artists. Some of his behind the scenes work has helped make the July 4th Freedom Festival a success.

This month he is taking his passion for music and teaching to Thailand. As part of the groups Street Stops and Mountain Stops he will travel to villages in Thailand. “We want to bring the arts that we are fortunate enough to be part of to five or six villages, two orphanages and one all Hmong girls high school. Usually we go for at least three weeks. But this time we are doing a site visit then in December we will be there for almost a month. This year we are going two times. We wanted to go near the New Year, there are a lot of tourists and all the Hmong villages are doing the Hmong New Year.”

When asked why he wanted to go he said, “I think it is the whole reason of reconnecting with our people overseas. When we went for the first time, we had this notion that since they lived in the old country everyone would still speak really fluent Hmong. Not only American Hmong folks struggle with keeping their identity, but even overseas Hmong people struggle because they don’t live in a Hmong community, they live in an Thai community. We teach them their native language. Many of the younger Hmong kids only speak Thai.”

In addition to finding a common language in Hmong he uses music to communicate. “I teach them and allow them to write music for themselves.”

When asked what his goals for his music career he said, “Right now I feel like since I just got out of school it has just been a crazy ride, traveling and playing music around the city and never knew that I would be able to play and teach in Thailand and througout Southeast Asia. I want to teach in Vietnam and maybe even Australia. I hope it takes me everywhere over there so I can meet more people.” 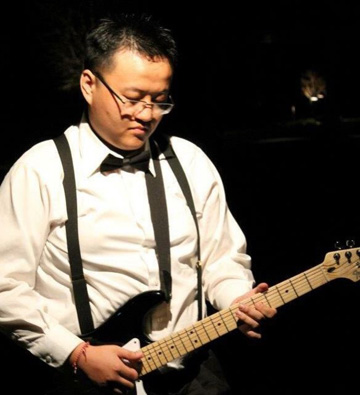