To many Minnesotans at this time of year, Winter can start to feel a little like a long road trip to Spring – are we there yet? As mammals, we humans seem to keep having to fight off the urge to slumber the winter away, to hibernate like a bat in a cave until April. While hibernation, or something like it, is one of the ways animals handle the long winter months, many people may be surprised to know that strategies to make it through the winter are just about as diverse in the animal community as among humans.

Generally, winter survival strategies for wildlife can be broken down into three broad categories that we might refer to as active, inactive and elsewhere. Let’s look at some examples of each; some may surprise you, some may make you jealous.

Inactive. This is one of the more well-known ways for Minnesota wildlife to deal with the winter, but there may be more varieties of inactive than you ever imagined! Wildlife in the frigid north has evolved a range of strategies. The common Grey Tree Frog actually produces a biological antifreeze that allows its body to freeze solid and then thaw out. Bears truly do just “sleep” the winter away in a state between true hibernation and normal sleep. Four of the eight species of bats native to Minnesota hibernate through the winter in caves around the state, their heart rates dropping from 200-300 beats per minute to 10, taking a breath only every couple minutes.

Elsewhere. Many Minnesotans have older relatives or friends whose approach to winter is to head south to warmer climes for a few months each year. Such geographic escape is a common strategy used by a variety of wildlife, too. This is known as migration. Many species such as the Ruby-throated hummingbird (a common backyard visitor in the Twin Cities) move hundreds or thousands of miles to places like Central America that stay warm all year long. While four of Minnesota’s native bat species hibernate, the other four prefer migration to hanging upside down in a cold cave for the winter months. Some species’ movements are not so dramatic. Turtles, for example, require only liquid, oxygen carrying water to sustain them over the winter, so they may move as little as a few hundred feet from shallow wetlands to deeper lakes or rivers where they remain buried in mud for the winter months.

Active! If you can’t escape it or sleep through it, you might as well embrace it. Though it might surprise some folks, there are a whole bunch of animals that seem to have that attitude toward winter, spending the season as active participants. Sometimes they can be even more active than in the summer months! Our state’s largest salamander, the aquatic mudpuppy, spends its winters very actively feeding and breeding, remaining largely sedentary in the summer as they guard their eggs under rocks. Voles are largely solitary in the warmer months, but in winter they can create a maze of tunnels beneath the snow to travel safely and socialize, out of sight of predators such as owls. Speaking of owls, they’re another species that gets very active in the deep of winter. Stand in your backyard at night and listen for them hooting to each other as they set up territories and prepare to nest.

So, as winter stretches on, consider getting outside to see what’s going on in the natural world. There’s a whole lot more happening than you might guess. Winter is a great time to look for animal tracks, and for exploring places that might be too wet, weedy or buggy in summer. Many state parks offer special activities in winter; visit www.mndnr.gov and search for the “events calendar.” You can also see a lot just looking out a favorite window and watching for wildlife that has also stuck around in the frozen north. Don’t complain about winter, learn to enjoy it!

Erica Hoaglund is a biologist for the DNR’s Nongame Wildlife Program, which helps preserve and protect thousands of Minnesota wildlife species, some of them threatened or endangered. The program is supported almost entirely through voluntary donations, either directly or by designating an amount to donate on Line 22 of your Minnesota individual income tax form (look for the loon). Visit www.mndnr.gov/nongame to learn more. 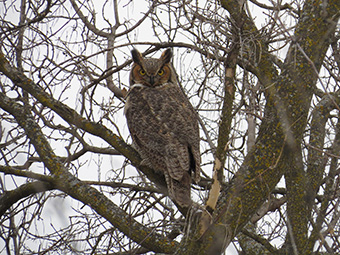 Wildlife deals with winter by hibernating, migrating or meeting it head-on. Owls are among the species that get active in winter. Listen for them at night this time of year as they hoot back and forth while setting up territories and preparing to nest. 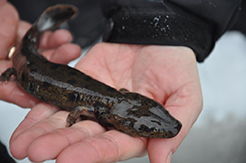 Minnesota’s biggest salamander, the mudpuppy, spends its winters in the water actively feeding and breeding, They’re largely sedentary in the summer.