Hmong Veterans Parade On The Eastside Of St. Paul

On July 22nd roughly 200 Hmong, Cambodian and Lao veterans gathered at the Hayden Heights Recreation Center at 1965 Hoyt Avenue in St. Paul for a parade to honor their service that ended at the General Vang Pao Community Center at 1600 White Bear Avenue.

Hmong Times spoke with Koua Vang, Director for the new General Vang Pao Community Center on the Eastside to discuss the parade. He said that this is the first annual parade, and that as we speak; a bill is in Congress to create a national day to honor Hmong Veterans and other veterans of the Secret War.

There is currently a state day to honor the Hmong in general in May, but this day in July is dedicated to the veterans. Vang said that the day is significant because July 4th was the first day that General Vang Pao came to America. Since there are already several holidays in July Vang explained that, “The officials and colonels involved with the war have worked with Congress to pick another day in July. There is a bill going through all the steps to be passed, we are hoping it will be passed.”

So to kick off the first annual Hmong Veterans Day, Vang and a community committee organized a parade, “This is not just one organization doing this. We wanted to have a parade and this year it was at the General Vang Pao Community Center, but next year the parade will be at a different site. This is a very specific day to honor the heroes of the Vietnam War [Secret War].” In addition to Hmong Veterans, Cambodian, Lao, and U.S. National Guard veterans all gathered including representatives from the paramedics, fire department, City of St. Paul, Dan Bostrom and Amy Klobuchar’s office. In all about 500 people came together to celebrate.

“This is the first time ever that we are purposely focusing on the veterans and honoring the hero. I think the veterans overall enjoyed it. They are already looking forward to it for next year and want to begin a bit earlier planning it – in October or November.”

This year the planning was done with pretty short notice, only about 2½ weeks. Vang states, “Overall I think we did a good job, but would like to encourage all veterans to participate next year. This is not about my group or your group, this is about honoring all the veterans.” Vang went on to say that even people born in this country have a hero that paved the way for them to come to this country. “We would like to see full participation from the community to honor your own hero that had anything to do with the war and sacrificed for the war. Their sacrifice can easily be forgotten and if we don’t honor them they will just fade away.” 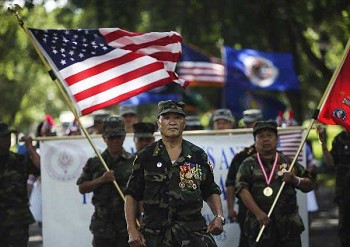