For most of the representative-elects, it will be their first time in office. Rep. Fue Lee, however, was first elected two years ago – in 2016, he defeated Rep. Joe Mullery, a veteran politician who had represented north Minneapolis for more than two decades, and was backed by some of Minnesota’s best known politicians, including Attorney General-elect Keith Ellison and Governor Mark Dayton. Lee is the first person of color and of Asian descent to represent District 59A in the Minnesota House, and the fourth Hmong American elected to a state legislature. In May this year, he also introduced a resolution on the floor of the Minnesota House of Representatives commemorating Asian/Pacific American Heritage Month.

“I want to connect the Hmong community and my district to the Capitol. It’s important to me to help them understand the political process and what it can do for them, as well as motivate them to generate their own ideas to bring to the legislature. I hope Hmong and non-Hmong people in my district reach out to me, and think of me as a voice for them,” he says. “As a Hmong American politician, it’s really exciting to see how the number of Hmong American representative-elects has grown with the midterm election. It opens the door to new possibilities.”

“I think the biggest part of my role is to give voice to the Hmong community as well as other AAPI [Asian American and Pacific Islander] communities who have long been underrepresented in mainstream politics. This is a seat to give voice, and a space people should feel welcomed to,” Vang says.

Meanwhile, in East St. Paul, representative-elect Jay Xiong is getting ready to take over House District 67B from longtime state Rep. Sheldon Johnson, who chose not to run for re-election after nine terms, and endorsed Xiong’s candidacy back in March.

“I am thankful for all East Siders who also call my neighborhood home. This great city has welcomed our [Hmong] refugee community over 40 years ago. To a new city and a great nation we now call home, I can think of no greater way to give back than by being a voice to advocate for my fellow neighbors in public service,” Xiong says.

“I may be Hmong, but I will proudly serve all people who live in 67B. I will work in partnership with anyone who will stand for values of equity and policies which uplift those who need help the most.”

In Maplewood and Woodbury, Tou Xiong has big plans for his time in office as well. (In another Minnesota first, there are now more Xiongs in the Minnesota House than Andersons, Johnsons, or Olsons!)

In a similar vein, Kaohly Her, policy director for St. Paul Mayor Melvin Carter and co-founder [with Susan Vue and KaYing Yang] of Maiv-PAC, the nation’s first-ever Hmong American political action committee, brings a commitment to eliminating inequities to the Minnesota House.

“I am incredibly honored to serve District 64A as their next representative. My focus in the coming session will be on fully funding public K-12 education, universal/single payer healthcare, affordable housing, economic development, and the environment,” she says. “Disparities in these areas prevent communities, especially marginalized communities, from equitable access in order to achieve prosperity, security, and success. Work on these priorities will not only benefit the Hmong community, but also Minnesotans across the state.”

On the judicial side, Paul Yang (Ramsey County Judge, 2nd District Court 20) and Adam Yang (Ramsey County Judge, 2nd District Court 11) come with a wealth of legal experience. While Paul Yang founded and manages his own law firm and also works part-time as a public defender for the State of Minnesota, Adam Yang is a founding member of the Hmong American Bar Association who has been serving as an attorney in the Office of the Public Defender-Hennepin County for many years.

“As a judge, my principles are about fairness for all those who come before the court system and ensuring that those individuals are treated with respect. I will practice these values, and I will do so with patience, understanding and fair-mindedness,” Adam Yang says. “I am a judge for all the people, and I will do my best to help make the court system easy to access and to provide education to the community on legal issues.”

“I believe that justice is one of the pillars upon which our government stands, and a fair and impartial judiciary is essential to democracy, upholding our rights under the constitution. A critical element in achieving and preserving fair and impartial justice is that people who come to the court to resolve their disputes should have confidence that the judicial process will give them a fair shake – especially those who can’t afford an attorney,” he says.

“As judges,” he adds, “we can make a difference in people’s lives.” 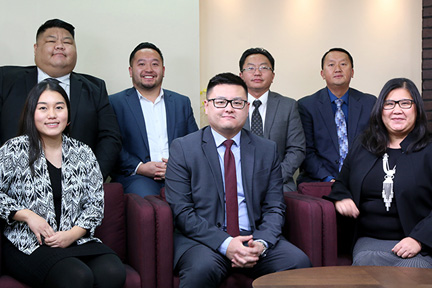