On February 7th, Kabao Xiong saw pictures posted on Facebook of headstones being removed from the Mountain View Cemetery located at 1411 W. Belmont Avenue in Fresno, California. Xiong said that from the pictures circulating via social media, the area resembled where her husband’s grandma is buried. They decided to go the following day to make sure their grandma’s grave was not disturbed. When they arrived, Xiong described how she saw “many Hmong families there crying and grieving their loved ones while workers continued to remove tombstones.” She expressed how it was heartbreaking to see how emotional everyone was. Xiong said they tried to get answers from the office as well as the workers moving the tombstones, but the office did not pick up their calls and the workers didn’t respond.

Later on in the week, Xiong and other families heard through the grapevine that the cemetery removed headstones so they could fix a pipe. Hmong USA TV delved deeper into investigating the situation and a representative found out from the manager of Mountain View Cemetery, Randy Giovanni, that headstones were removed so that they could have more room for a burial. Giovanni said that there were only four or five headstones that were moved. “In order to get the backhoe in there we had to move the markers, which is standard procedure,” Giovanni added.

In the Hmong culture, like many other cultures and religions, the after-life is something that is sacred. There are numerous rituals that must take place at a funeral and during a burial in order for a Hmong person’s spirit to properly go into the after-life. When a gravesite is disturbed, for whatever reason, it is problematic. It’s believed that the deceased person’s spirit can be frightened, which in turn, will lead to bad things happening to their current and future family members. For example, a deceased grandpa’s grave could be the reason why his son cannot prosper in life, no matter what he does. It can also be the reason why his grandson gets very sick.

In order to fix a disturbed spirit, a shaman has to be called upon to perform special rituals. A Hmong son, who wished to remain anonymous, said he went to check on his father and his father’s headstone was removed and not properly placed back. “It wasn’t even in the same spot and closer to a different grave. I fear for my family and future generations; my mom is talking to the elders to see what we should do for my dad.”

“The last thing I wanted to do is upset the Hmong community,” Giovanni told The Fresno Bee. “If this is a cultural issue, it was never brought to my attention,” he added.

Giovanni has been an employee with Mountain View Cemetery for seven years and expressed that this was the first time he encountered this problem. “Families just want to be told before it happens so we can prepare,” Xiong said when asked what she believed would be a good solution for the future. Randy Giovanni said if there are any families that have concerns due to what has occurred at Mountain View Cemetery, he encourages family members to reach out to him at: (559) 233-3327. 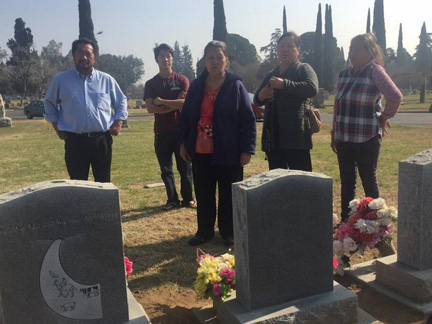