Students, under the directorship of Mr. Steven Coleman, performed three productions this year including:

Both UNIQUE and The Oldest Boy were presented by HCPA’s drama Masterclass and featured eight students. Jungle Book featured seventeen students including a cast of fifteen and two tech/crew members.

Mr. Coleman likes what he’s seen from participants in the school’s drama program.

“In three years, we’ve gone from doing no shows to at least two productions a year, occasionally more. I’m extremely proud and excited about the growth the department has seen. We’re even looking into the possibility of competing in a one-act festival. It may be a bit further down the road, but I’m glad we’re moving towards it.”

The Director is also looking forward to HCPA’s 2018-19 theater season.

“Our productions structure is changing a bit next year. In the past, we’ve reserved the productions class for the second semester; but with as much demand as we’re seeing, we’re going to be presenting C. S. Lewis’ The Lion, the Witch, and the Wardrobe as the children’s show next January. The spring show will be selected by the Masterclass after undergoing a unit on how professional theatres select a season. Options that have been discussed include Frankenstein, Macbeth, and Alice in Wonderland.

Coleman added, “Some goals for the department include offering a full-fledged tech class someday where students learn how to operate and work with saws and power tools. We’d also love to present a full length musical someday too. There’s lots of possibilities that we have with the program and even more if we develop an after school program. I would eventually love to see us do four shows a year–one through the school and one after school for each semester. I’ve been immensely blessed with this opportunity and it’s been wonderful to see the appreciation and love of theatre grow in this school. HCPA already has a strong appreciation of the performing arts and I’m happy to strengthen the team.” 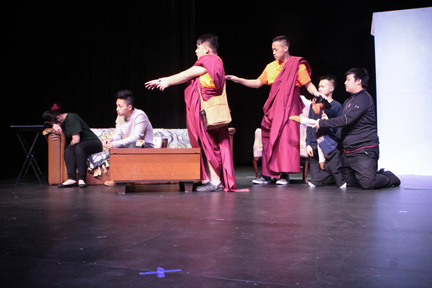