Girl In The White Dress – Part 5

It was 12:30 in the afternoon, and just as Shengyeng had expected, she was sitting outside on the apartment curb by the edge of the parking lot under the port not talking to other kids. She sat there alone, the front half of her butt cheeks on the scratchy cement curb and the other half on the soil of the curb peninsula that in it grew an untidy bush. Sitting elbows to knees, palms to cheeks, Shengyeng watched as cars swarmed into the lot; one by one, each of them circled around the lot hungrily, looking for a spot to park. An old white car drove in. Shengyeng was shocked at how old the thing looked. Its edges and corners were rusty and the front hood of the car was red instead of white. The little square door where the gasoline goes in was missing. It even had a broken window that was held together by duct tape. She wondered how that window got smashed like that. It wasn’t like there were bad guys in Fresno. At least, when she still lived in Fresno in the first grade, there were not any bad guys. She thought a while and settled on the notion that perhaps the driver of that car, an older man, had kids her age who were naughty and liked to lean their heads on the window when driving to the store with their brother in the back. Maybe that guy’s kids liked to lean a little too harshly and that may have cracked the window. Shengyeng wondered how that old guy and his old wife would have reacted when they saw that the window had broken. Did they hit this child? Knock their knuckles on her head, and say, “Niag tsov laig essss!” Or maybe they were nice, much nicer than her own mom and dad, and just said, “It’s okay. Don’t do it again.”

It always amazed her to watch cars drive around. It made her think of the day when she would drive. That would be the best day of her life, the day when she wouldn’t have to ask her mom to take her to conferences at school, because when it was up to her mom, they never went. That embarrassed her terribly, and she hated the feeling of having to shrug her shoulders when her teacher asked her why she and her parents didn’t come to conference the previous night. It was usually because her mom was tired and didn’t care to get up and go. And her dad was never around, always working or at someone else’s house, so he never could take her. But she couldn’t tell her teacher that. It would make her feel shy and worst of all, poor.

She watches as the man parks the white car behind a green one; he inches so close to the green car that he almost crashes into it. Shengyeng gritted her teeth and prayed silently to God that the old man wouldn’t cause such a stir. As if God heard her plea, the old man’s inching came to a jerking halt and the car’s rumbling engine quieted. He slowly gets out of the car his wife following behind him. As they walked toward her uncle’s apartment, she realized how much older he was close up. A lot. His hair was more grey than black and he was almost limping as he carried the 24-can pack of Mountain Dew one handed, heading toward her direction. For a moment, he paused in the middle of the lot, set the case of soda on the ground, then switched hands carrying the soda case and continued walking. She pitied him and the sad look on his face. She wanted to run over to him and help him carry the soda pack so he wouldn’t be so out of breath, but she feared that he’d think of her as a kid who hovered over sweets. There were lots of those types of kids in her uncle’s house right now and she needn’t add to the mix. Also, what would she have said to him? She didn’t know how to say fluently in Hmong, “Let me help you carry that, mister.” If she opened her mouth to speak, she would probably stutter, and the old man would probably laugh at her and say, “Whose kid are you? What is your mom and dad’s name?” So she just sat back and watched the old man come and pass her by.

Shengyeng felt something nudge her on the shoulder. She turned around. It was Shoua, her girl cousin and her once-best friend a long time ago when they were in Kindergarten and first grade. Shengyeng had waited all morning for Shoua to approach her. Finally. Shoua’s hand grasped onto a white paper towel, ripped paper towel with two hard-boiled eggs nestled in it. Shoua handed her one. Shengyeng took it into her cupped hands as gentle as if it were a baby chick. It felt warm in her palms, a feeling that comforted her. She brought the egg to her lips and then rolled it on her cheek to feel the warmth.

“Thanks,” Shengyeng said. “How did you get these?”

“My mom was boiling them for the platter.” Shoua sat beside her. “Why didn’t you come play hide-and-seek with us over there?” She pointed over in the direction of the running kids in front of their grandma’s apartment unit. There were bushes that stood just a little taller than her with thick branches and waxy leaves that grew around into a half-moon shaped nook before the front of their grandma’s door. Some kids she didn’t recognize crouched under the bushes in the dirt, doing their best to keep quiet from the seeker.

“I didn’t want to play,” she lied. She felt like she was always lying all of her life. The truth was because her mom had warned her not to play with the other kids or else she’d get in trouble. Her mom and dad never wanted to be embarrassed or be called bad parents, so this was often a warning they told when over at people’s houses. Even though it would have been nice to run and laugh with kids she barely even knew, she refrained.

“Your little brother is playing.” Shoua pointed over toward the bushes. Indeed, her little brother was having a blast, she guessed, as he chased a little girl in pigtails in the grass.

They were silent for a moment, then she watched Shoua crack her egg on the cement curb in between them. “You crack it like this,” Shoua said, striking the egg gently on the rough cement. Shengyeng copied her, and began peeling her nice and warm egg, throwing the peels on the ground. She bit into it and the warm yellow center burned her gums with a brief shock. Streams of visible heat radiated in curls from the bright yolk. Shoua blew on hers. Shengyeng copied. Soon, the two of them were done. They wiped their hands clean on their pant legs and decided to start digging in the dirt on the curbside.

“Remember when we buried a ladybug here when we were in the first grade?” Shoua asked.

Shengyeng chuckled. “We were so funny. Remember, we said that when the ladybug goes to heaven, he will ask God to be reincarnated as a man for us to marry?”

Shoua laughed excitedly. “Yes,” she said, “yes we did.”

Shengyeng surveyed the soil to see if she could spot the ladybug’s tombstone that she and Shoua had planted from over two years ago. The ground was even. Not a raised sand in sight. Some things fade away with time, she guessed.

The party went on. Just like Shengyeng had imagined, there was cow in the meal. Laj, beef stew, chicken wings, and fried shrimp. But no egg rolls. It was worth hoping for.

Soon it would be time for them to leave Fresno, her birth town – the place she both loathed and longed. She never quite understood how two sets of opposing feelings can coexist this way, but now that she and Shoua were on talking terms, she felt like she could stay in Fresno forever.

Stay tuned for Part 6 in the next issue of the Hmong Times. 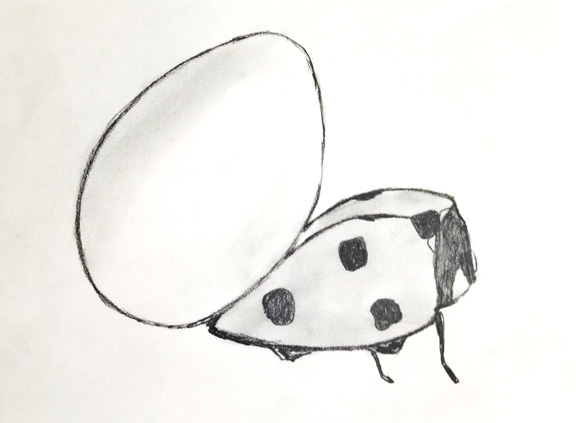