Girl In The White Dress – Part 3

By the time Shengyeng arrived at Fresno, she couldn’t feel her legs. Had she been asleep that long in the car? It was already nighttime, the familiar cricket songs boomed outside her uncle’s door as they approached. Their apartment sat on the top of a little hill connected by the backyards with a neighboring apartment. Shengyeng and her family used to live there when she was still in kindergarten. She can still remember the nights after school when she and her girl cousins would roll down the hill like a log. It felt so fun and exhilarating, because the minute she started rolling, she would go faster and faster down until she reached the very bottom. The only bad thing was that after it all, she would be very itchy all over. It was really bad because she always went last to take a shower, because she was smaller and not as fast as her other sisters. Once the bathroom door opened, her sisters would run so fast toward it, that she’d be shoved away if she even tried to race them. That made Shengyeng scratch her arms so long and hard, sometimes they became very, very red and didn’t go away until a few days.

“You guys have come!” greeted her uncle as he opened the door. He extended his hand and shook her dad’s. “Tuaj los niam tij, tuaj los me SeeYees?” he said.

Shengyeng smiled shyly, hands grasping on the back of her dad’s shirt. She entered through the door following behind her dad, her little brother at her side, also shy she guessed. Beyond the small living room was the kitchen and dining area, viewable at the front door. There was a sliding deck door that led out to the backyard, where a dozen of adults, men and woman, spoke amongst themselves, each one chopping away at hunks of dark red meat with stubby butcher knives. Even with the glass door closed, she could hear the thuck, thuck, thuck, sound of the red meat being smushed by the blade against the slab of tree trunk they called a cutting board. The living area was filled with kids her age, some older, some younger.

“What work is there to do?” her dad asked.

“Yes, tell us so we can get started,” her mom added, tying up her loose hair into a bun.

“Oh, don’t stress it,” said her uncle, “you guys have just arrived and are probably tired. Take some rest. The young guys are already chopping meat outside; we went to kill the cow this early morning already, but the guys just got off work not too long ago so they came over to help.”

“We are not tired,” her dad lied. “The trip just required sitting, there’s no hurry to settle down.” Shengyeng could tell that her dad needed some rest; his eyes were droopy and his hair uncombed. Her dad’s hair was never uncombed.

“Don’t say any more,” her uncle dismissed waiving his had at her dad. “You and niam tij and the kids go wash up. Dinner is almost ready.” He walked paces ahead of them, gesturing her dad to follow. “Niam Ntxawm already set up a room for you and Niam Tij. The kids can sleep together in the kids’ room.”

Dad didn’t argue anymore. He did as her uncle insisted. This was the normal way, Shengyeng guessed, of being polite. To deny one’s desires of even the thing that one wanted most. In her case now, it was a shower. But minutes or maybe even hours before now, it was the lonely cola drink in the blue Igloo ice chest, that she didn’t get to have because she’d slept through the rest stop, not dissimilar to how she’d sleep through all her K-Mart outings. It seemed like she was always sleeping through the good parts of life. Wouldn’t it be cool if she could have it the other way around? Sleep through the bad and boring parts of life and be awake for all the good ones?

Mary jolted awake at the loud, repeating honk of the car horn behind her. She couldn’t believe it; she’d fallen asleep again on the road. She stepped hard on the gas and zoomed forward, slapping her left cheek a loud plat, plat, plat. She had to stop this, because it wasn’t safe. Did she really want to die in a car crash? She mentally scolded herself. Or worst yet, what if she doesn’t die but her Angealia does. It’s Hmonglish – Angelina and Kalia together. Yep, that’s her baby girl. She’s already picked out a name for her little girl. Of course it is going to be a girl; she knew because she’s heard her mom say that with boys, the pregnant woman would dream of snakes and stones, but with girls, they’d dream of woven baskets, like a kawm. She has not been having very visual dreams lately, but knows that at the least, they’ve not included any snakes or stones, because that would just frighten her, and to her knowledge, she has not been waking up frightened. Not yet, at least.

Tears collected at her bottom eyelid as she yawned wide as she could. Stars and sparkles colored her vision as her lashes soaked up the teardrops. She dried them with her bare arm, a streak of salty tears inked across her pale forearm skin. What a great decision she made, wearing a sleeveless, fitted tunic dress to LA, a place she hardly knew the way around, and where drivers were much more aggressive. She was so stupid, how could she be in this position right now? She was just as dumb as her mom had said, just hung up on Tom while he was out in some other world moving on with his life. Warm, thick tears rolled down her cheeks. How could Tom leave her in the mountains all night? She’d driven there like he said. She had to find out what was the matter.

It was the wake of day but even so, she couldn’t quite find her way to Tom’s house. To her memory, once she reached the McDonalds on Gardena Avenue, all she had to do was take a left and go for three blocks. His house was the yellow one on the right. This was not her first time going to Tom’s; it was her second. Sure, she’s come to LA many times this summer, but it was only to meet Tom at public places. Now, she’s probably driven over five, six blocks and there was no yellow house to the right. Her gas was near “E” and her wallet not different. Oh dear God. She’d definitely be in trouble if she didn’t find him soon. She circled back the way she came until she reached Gardena Avenue again. Red light. She slowed to a complete stop. She sniffed back the tears, not feeling so tired anymore. She checked her reflection on her visor mirror. Smeared mascara, chapped lips. She ran fingers through her bangs and thick curls, brushing locks of it to her left shoulder. She looked like death. No wonder Tom didn’t want to see her. Mary watched her lips tremble in her visor mirror, tears rolling down the side of her cheeks. She hiccupped pitifully.

She jerked at the sound of another car’s honk, her forehead striking the edge of her car’s blind spot. This time it wasn’t the car behind her, but the one to her side. Beep. Beep.

She rolled down her window. She couldn’t believe her eyes. It was Tom, sitting in the passenger’s seat in the car next to her. In the driver’s seat was a smiling young lady with peachy lips and reflective pink sunglasses. Mary’s heart sank to her stomach. What was happening to her life?

Stay tuned for Part 4 in the next issue of the Hmong Times. 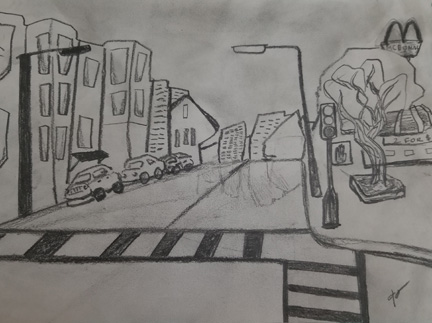