Girl In The White Dress – Part 2

How did darkness settle in so soon? Mary wondered, shifting her attention from her front view, to her side mirrors, to her rearview mirror, and then back to her front view. Thankfully, there was no fog. It seemed like only minutes since she left Fresno, but now, Mary could already see the stark white moon hanging low in the distance above the horizon.

This was her fifth time that summer driving to LA, and she knew well that it would not be her last. Tom had sworn to meet her halfway, near where the mountains stood tall as giants up against the convoluted highway. Nearby there was a rest area that contained the church-like building casually standing tall before the mountain and river valley backdrop, as if nothing else in the world mattered. And in front of its double doors sat the soothing fountain that literally ran 24-7. This was the very location where they’d first met, on a school trip during their junior year of high school. They’d been talking ever since, him in LA, and she in Fresno. The long distance relationship was of course tough, especially when neither of them did drive nor had any much means of communicating with one another.

To Mary, she was of marrying age now, eighteen. Of course she was ready for more with Tom. Most Hmong girls she knew, and even some of her close cousins, married much younger than that and have fostered good marriages. Why couldn’t she do the same at this mature age?

Of course, Mom and Dad were always looming over Mary and breathing down her neck. “You must go to college and become educated,” is all she ever hears nowadays. “Men will line up at your doorstep once you’re educated,” her dad had said. The truth was, she didn’t want other men, she just wanted Tom. What was so bad about him? Was it the fact that he lived far away? The fact that his clan is Kue, a rare Hmong clan that her Xiong clan knew little about? Or was it his social status, not well known or educated in any marvelous way? In truth, her parents hadn’t even met him so how could they judge? That was so unfair.

Darkness seemed to engulf the narrow, curved roads. She hadn’t noticed it before, but in the roads where the mountains lined closely on the side here, streetlights were scarce. Cars were few too. There was only her little white ’97 Camry following behind a red pickup truck about ten yards away from her. Mary’s eyelids grew heavy, as the darkness seemed to grow thicker by the minute. She regretted not spending the $1.50 on the Red Bull while she loaded up on gas in Fresno. She was traveling on a budget and didn’t want to be wasteful. How was she going to make it to that church house?

The truck before her seemed to advance further ahead. She pressed on her gas to catch up, for fear of being the only car on the road for some distance yet. If anything, she needed to reach that church house so that maybe Tom could drive her to his place. But it was getting harder to see the road ahead of her; she could hardly visualize the yellow dotted line in the center of the road that divided her lane from the oncoming lane. In the blink of an eye, a small white creature crossed her path. Mary instinctively stuck her foot on the brakes, her car screeched to a jerking halt. Both her hands, gripping tightly to her steering wheel, shivered uncontrollably. Eyes closed, lips trembling, Mary said a silent prayer under her breath to spare the creature from her tires. It would be terrible to have bloodstains on he already rusty car. Also, running over something during the night would be bad luck for sure. She contemplated getting out to see it, but didn’t want to loose the truck. She peered in her rear view mirror. Nothing on the road. Nothing she could see, at least. She stepped on the gas, toward the red truck, now only a spot in the distance.

With one hand on the steering wheel, another on her cheek, pinching harshly so she could feel the pain, she managed to stay awake long enough to reach the church building rest area. But her car was the only one there. Maybe Tom got delayed somewhere. He couldn’t have forgotten. In his letter, he even said himself that he had something important to tell her. To meet at the spot where they first met, it must be something special that he’d have planned. Parked under a tree, she sat quietly in her car, doors locked, windows up despite the heat; she wondered what Tom could possibly have to tell her. Was it what she wanted to hear? Was she finally going to be engaged? She could not help but smile. Twinkles and butterflies filled her belly just thinking about it. That was not the only thing that filled her belly. She rubbed her belly lightly with a soft smile. She had something special of her own to tell Tom.

Someone was at her window. She quickly rolled her car seat lever ferociously to sit up straight in her chair. Her windows were fogged up. She couldn’t make out the face. A thin-nosed face seemingly stood beside her car door, asking her to role down her window. She checked her dash. 8:59 AM. Had she been sleeping that long?

She swallowed hard. Rolled down her windows.

“Ma’am, I’m going to have to ask you to leave the premise. You cannot park here overnight. It is restricted in this part of town.”

Mary surveyed the parking lot. Empty. How could he not come?

“I – I’m sorry officer. Right away.” She started her car and drove away.

Stay tuned for Part 3 in the next issue of the Hmong Times. 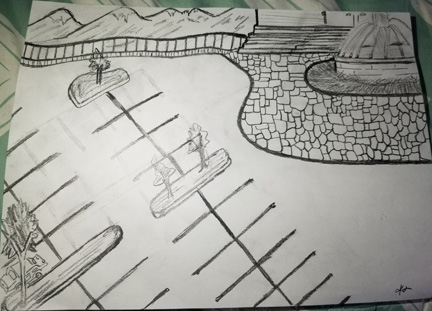