Girl In The White Dress – A Short Story Part 1

Shengyeng yawned for the 48th time that day as her dad’s car cruised over the uneven road. She tried to stretch her mouth as wide as a hippo’s, an animal that she’d seen on the PBS Channel just a few nights ago. Their teeth were thick and their tongues long and slippery. They yawned so big, the back of their throat seemed like a dark and empty tunnel, long enough for her arm to reach down. Boy must it feel good, she’d thought on the hippo’s behalf, to yawn that big, opening their jaw so wide and stretching out their tongue lazily. That good feeling was nothing like how she felt right now: sleepy, carsick, her butt cheeks sore from sitting too long, and her head felt dizzy. What was worst was how both of her ears were plugged so tight as if two thick fingers were pushing down her eardrums. It didn’t matter how many times she’d yawned or faked a yawn within the last hour, nothing could clear her ears long enough for her to at least enjoy the awesome scenery. Outside Shengyeng’s window were the immensely tall mountainsides that lined the two-way highway that led them to grandma’s town of Fresno from her L.A. home. The mountains were all that she’d looked forward to on this trip. She had waited so long to see those rocky hills; she’d planned to search the very tops of the mountains for any traces of mountain lions (another segment she saw on PBS) or even owls (and yet another) on her way there. But right now, she was so, so uncomfortable, too uncomfortable to enjoy any of it.

Her family didn’t go to Fresno very much. It was only during Shaman ceremonies or the New Year’s celebration. This time, her uncle (her dad’s brother) was getting a new name, an old-age name, so her mom and dad decided to go. Her big sister, Choua, was supposed to go with her. That would have made the car ride more fun. But, no. Her brother Xai had to come.

Shengyeng guessed that was not the worst thing in the world. What was actually worst was the fact that she would not be getting to eat egg rolls at the celebration. Her mom never ever cooked egg rolls for her and her sisters, because she didn’t like doing it. But every time she went to Fresno, her mom and other old ladies would cook them together for all the kids. Egg rolls were her favorite. Which was why it made this trip so much worse for her. She overheard her aunt saying to her mom on the phone that they’d killed a cow instead of a pig for the celebration, so she knew that egg rolls would not be in her future. Beef stew and Laj maybe but egg rolls, no.

Shengyeng sighed at this thought. With the view of the magnificent mountains not working out so far plus the negative eggroll prospect, how was she going to survive this trip? There was really nothing in Fresno for her. Well, there were her grandma, her aunt and uncle (who was her dad’s brother), her girl cousins, boy cousins, and then there was her old apartment neighbors, Maiyia and Maigee (they were her age), and then her other aunt (who was her dad’s sister). Shengyeng sighed at the thought. If Shengyeng was honest, there were in fact a lot in Fresno, but a lot of people doesn’t mean that there was anything for her there. For one, she was never close to her grandma, and her grandma also had no incentive to call her a favorite, anyway. There were so many other grandchildren better and cuter and smarter and prettier than her. And then her aunts and uncles, well, they had their own kids. What place was left in their homes for her? And her girl neighbors Maiyia and Maigee, well, the last time she’d seen them was when she was in the first grade, and now she was already in the fifth. So maybe they wouldn’t even remember her. Her uncle (her dad’s brother) did have a girl that was just her age. But Shengyeng doubted that that girl would want to play with her because she knew they would both shy with one another once they met.

The drive there would take them three whole hours (that is if she could tell time correctly). Or maybe it would even be five hours. One thing was certain; it was not past ten hours, but maybe five or six. She sighed heavily. She guessed she was not sure how long it’d be, but because she’d lost her hearing ever since passing Disney Land, Six Flags Magic Mountain, and then reaching those rocky and green mountains alongside the highway, it was starting to feel like an eternity.

In her dad’s little car, her little brother, Zai, was snoring screeching noises like an elephant right beside her, his heavy head resting on her left shoulder. She felt lucky to have chosen a long sleeve t-shirt because it helped absorb her brother’s drool and head-sweat. Blech! She always hated it when her mom forced her to bear the weight of her little brother’s head while he sleeps in the car. “He will have bad neck pains when he wakes. Plus, he is just a baby so you have to love him.” She wanted to punch him sometimes.

In all of her nine long years of life, she has never understood why her brother was favored over her and her sisters. He wasn’t much younger than her either—just by three years. To her good knowledge, she herself was always waking up in the car after long drives to and from K-Mart, her favorite store in the whole world. Sadly, she could never stay awake for the trip long enough to get to go inside and pick up a pack of gum from the registers when she did get to go to K-Mart. She didn’t get to go all the time, actually. Only when she got really good or lucky and her big sister stayed home and let her go. That’s what happens when you’re not too big and not too small. You sleep during your turn to K-Mart. If it was her brother, he got to go every time because he was the smallest and the only boy. That was what her mom and dad told her. And then he always got gum that he never shared.

On the side of the snoring elephant on her shoulder was the blue Igloo ice chest that her mom had filled to the brim with ice pellets, water bottles, rice sticks, and boiled Hmong chicken wrapped in foil. If she wasn’t mistaken, there might be one Cola can among the boring water in the ice chest. All this plugged ear, dizziness, and carsick-feelings were making her very thirsty. Maybe if she had something to swallow, her ears could unplug themselves.

She reached her right arm, the arm farthest from the blue ice chest, toward it anyway hoping to pry open the lid and with some miracle from God, be able to search within the ice pellets very, very quietly for the one special Cola. It wasn’t her brother that she was scared of waking, but it was more her mom. Her dad was driving and nothing could bother him. Plus, he didn’t really like to yell a lot, unlike her mom. At home, she yelled at everything Shengyeng did whether it was turn on the lights too long or scoop too much rice into her dinner bowl that she later couldn’t finish. And it hurt too when her mom’s knuckles knocked on the side of her head and these house crimes. So Shengyeng was sure to be as quiet as a mouse. She stretched her arm and hand and fingers as far as she humanly could. Her spinning head seemed to spin more profoundly now, as she exerted herself more and more, reaching her short, little fingers toward the white lid did not even make it past Zai’s big forehead. Of course she couldn’t move, not to mention feel, her left arm at this point, so there was no hope left in trying. Maybe at their first rest stop, she could follow her dad like a dog while he is hauling out the chest and grab the Cola for herself. That would make this trip worth it at last. Of course, she knew well the one thing that would top it all and be even better than the Cola. It was something that would make the trip even more worth it; if she saw at least just for one second, the girl in the white dress up in the mountains. It was a story that her L.A. auntie told her before she left to Fresno. Shengyeng wanted to see the woman in the white dress because big sister Choua didn’t believe that she was real. Shengyeng thought that if she could at least see her once, she would have the pleasure to go back home and tell her big sister and auntie that it was true. The woman that lived in the mountains between L.A. and Fresno was real. She lives there, her aunt has said, because she died there a long, long time ago.

To be continued…please stay tuned for Part 2 in the next Hmong Times issue. 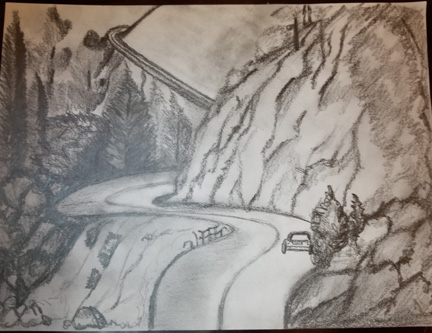