From The Hook To The Frying Pan: An Introduction To Catfish Fishing

Consider the lowly catfish. With its whisker-like barbels and flattened face, it might not be the prettiest fish swimming in Minnesota’s waters. But more and more anglers around the state are finding it an attractive species, both for sport and for the frying pan.

“Catfish are hard fighters, and they’re widely considered fine table fare,” says Mario Travaline a fisheries biologist with the Minnesota Department of Natural Resources’ Fishing in the Neighborhood (FiN) program. “Usually, if you can find one, you’ll find several. And they can be fished with simple tackle and a variety of baits.”

Once stigmatized as river dwellers that only a hungry Iowan would eat, catfish have been growing in popularity as people learn that they’re fun to fish for and good to eat, as long you follow the same consumption advisories that apply to other fish. Some of those changing perceptions are the result of fishing shows that have highlighted catfish angling, and the many high quality opportunities easily available in Minnesota.

“People saw these big fish being pulled up and thought, that looks like fun!” says Joel Stiras, a DNR fisheries specialist who’s been studying the habits of catfish and other river species for the past decade. “It’s also something that can be done without a major investment. You don’t need a $20,000 boat and $20 lures. You can pretty easily catch fish of good size, and in good numbers with simple tackle.”

When Stiras mentions “fish of good size,” he’s not kidding. While the state record for walleye is 17.5 pounds, channel catfish weighing 20 pounds are not uncommon in some of Minnesota’s large rivers. And 30- to 40-pound flatheads – the other species of catfish in the state – are well within reasonable expectation on the Minnesota River and elsewhere. The state record for a flathead catfish, caught on the St. Croix River in Washington County, is 70 pounds – about the size of an average 10-year-old child!

While rivers are the best place to fish for big catfish, the Minnesota DNR also stocks channel catfish in about two dozen lakes around the metro region to provide close-to-home angling opportunities. Just go to mndnr.gov and do a search for “catfish lakes” to pull up an interactive map.

Channel catfish are omnivorous; they’ll eat almost anything. Nightcrawlers are commonly used for bait, or you can try “Mario’s magic,” as recommended by DNR’s Travaline: cut some cheap hot dogs in half, put them in a zip-lock bag along with some garlic powder and a package of red or purple gelatin mix, and let it sit overnight. Slip the hot dog on a hook with a weight above, and put it in the water. “You might have to fight off some sunfish,” Travaline says. “But if you get it near a channel catfish, they can’t resist.”

“Flathead catfish are predators and respond best to live bait – a bullhead, white sucker or creek chub works well. Look for areas where faster currents are broken by fallen trees, logs, rocks. You’re likely to get snagged,” Stiras says, “but if you’re not getting snagged, you’re probably not fishing in the right spot for catfish.”

May to early June offers some of the best catfish action, and flatheads tend to be more active at night. The season for flatheads runs from April 1 through November 30, while channel cats can be caught year-round. You can have a total of five catfish in possession, but only two can be flatheads, and only one can be bigger than 24 inches.

The Red River of the North is nationally recognized as a great place to hunt for big channel catfish. The 240 miles of the Minnesota River from Granite Falls to Fort Snelling is the best place in the state to catch flatheads, and it’s an excellent choice for channel cats as well. And with four state parks and numerous other public lands along its course, finding a place to launch a boat or fish from shore is easy. Be forewarned, though: once you hook into a big cat, you may be hooked on a new flavor of fun!

While the season for channel catfish is open year-round, and flathead may be caught April through November, the season for walleye and northern pike opens on Saturday May 12. Check www.mndnr.gov for all fishing seasons and regulations. 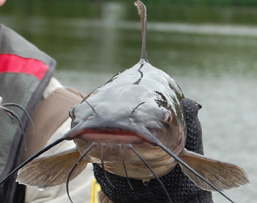