From None To Many – The Resurgence Of Wild Turkeys In Minnesota

The next time you see a wild turkey, offer a silent thank you to the state of Missouri. Yes, Missouri. Also, consider a quiet thanks to the Department of Natural Resource wildlife specialists who trapped, moved, and ultimately helped reintroduce the once overhunted birds to the state.

“The success story started with a trade,” said Lindsey Mesinger, a wildlife research biologist with the DNR. “In the early 1970s, the DNR traded a flock of its home grown ruffed grouse for 29 turkeys from Missouri. The Missouri-born birds were released in Houston County in southeastern Minnesota.”

Not long after the Missouri swap, the wild turkey population “took off pretty quickly,” Mesinger said. By the late 1970s, Minnesota held its first turkey hunt. Today there are no restrictions on the number of turkey hunting permits that are issued; the wild turkey population numbers well more than 70,000. The birds live in nearly every part of the state, aided by Minnesota’s warmer winters.

They were also aided with transport in the early days by people like Bob Tangen, who is a retired assistant wildlife area manager at Whitewater State Park. The original Missouri flock flourished quite well in Houston County, and to speed up that process of expansion, DNR staff trapped the birds with nets and moved them up to 50 miles to a new habitat.

In the winter months from 1976 to 1978, Tangen and Gary Nelson, a turkey biologist, captured 20 to 25 turkeys at a time with a rocket net. They located a turkey flock and put corn down to attract the birds. The men waited nearby in a blind. For two or three days they corn fed the turkeys.

Then one day as the birds enjoyed their corn feast with all heads down, pecking away, a rocket launched which draped a large net over the flock. Tangen and Nelson then threw blankets on the terrified birds, to calm them, and then pulled them from the net and placed the turkeys in crates. The birds were outfitted with a tiny beeping backpack with an antenna that tracked their movement.

Tangen said he grew pretty fond of turkeys over time, but added that winter weather conditions could be “brutal” at times. Waiting for turkeys in a blind when it was 10 degrees below zero presented challenges. “When you’re young, you can do that work,” he said.

Now when Tangen sees turkeys in the wild, he is reminded that the stories of their resurgence in Minnesota is a true wildlife success story. For years wildlife specialists presumed the birds only thrived in oak forests where they fed on acorns. With the exception of northeastern Minnesota where winters are still severe, turkeys will go almost anywhere they can find food. “Males can weigh up to 30 pounds, hens weigh about 10 to 12 pounds,” Tangen said.

Since turkeys are the largest game bird in the U.S., it makes you wonder if hunting turkeys poses any challenge at all since the targets are huge and fly infrequently. Lindsey Mesinger hunts turkeys, and said that they have a few defenses like running fast. Their coloring acts like an effective defensive camouflage, and they tend to avoid people. Wild turkey season occurs twice each year in the spring and fall. The 2019 wild turkey hunt season ended October 27.

The birds roost in trees at night, and display a style of social behavior when gathered as a group, Mesinger said. When she hunts in the morning hours before the sun rises, she enjoys the vocalization from treetops.

“That the birds are back is a clear success story,” Mesinger said, “and shows good wildlife conservation and stewardship. Many partnering turkey advocates aided in their return, including members of the National Wild Turkey Federation who helped transport the flocks to new habitats.” 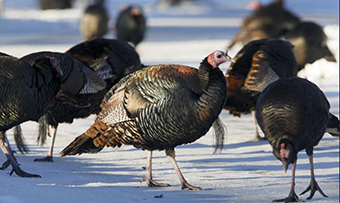 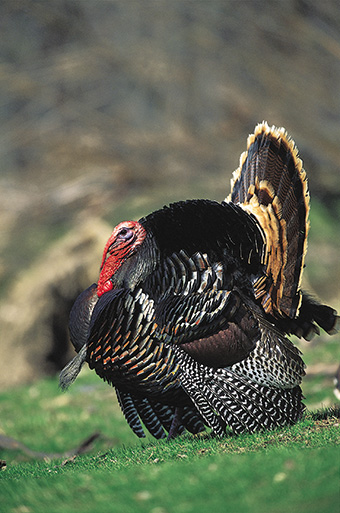