2018 will be a historical year for the Minnesota Hmong community and its ancestral homeland in Hunan, China. Through a partnership with the St. Paul-Changsha China Friendship Garden, cultural artwork will be exchanged.

Phalen Regional Park in St. Paul will be receiving a replica of the famous Aiwan Pavilion in Changsha’s Yanghu Wetlands Park in 2018 in celebration of the 30th anniversary of the St. Paul-Changsha sister city relationship. Chinese artisans will travel to St. Paul in 2018 to install the pavilion designed in the 18th century during the Qing Dynasty.

In exchange, St. Paul will be sending five Peanuts characters to Changsha’s park with artwork by Hmong artist Kao Lee Thao, Chinese artist Yudong Shen and TivoliToo, the company that has made hundreds of the statues around St. Paul. Statues to be sent to China include Snoopy, Charlie Brown, Linus and Snoopy’s Dog House with Minnesota state symbols such as a loon, lady slipper, pine and butterfly. Shen painted the dog house.

“Embracing my heritage and culture has helped to enriched my artistic career,” said Thao, a full-time artist who graduated with a media arts and animation degree and started a 3D animation company.

“I’ve always been fond of Hmong textiles and wanted to utilize symbols that are personal to me,” she said. “The textiles I designed on Lucy unite these two aspects, inspired by my journey as a Hmong artist in America. One item that resonates in my work is the swirl. I’m drawn to the visual appearance of having no beginning or end because we all travel on forever.”

Thao said it took several months of revisions in partnership with TivoliToo artists to create the piece. Being involved in the project that unites different communities through art was meaningful to Thao.

“As an artist and animator, it was an honor to design my culture on an iconic character,” she noted. “I grew up watching Snoopy, which inspired me to be an animator and working on Lucy was a return to my early animation career. My artistic return is mirrored in Lucy’s journey to Changsha and returning back to Hmong origins.”

The Hmong trace ancestral roots back to Hunan province thousands of years ago, where Changsha is located. Unfortunately, the Hmong were not treated equally by the Chinese government at that time. Some Hmong traveled south to Laos and then faced additional persecution after the Vietnam War, in which they had sided with the U.S. Many Hmong fled to Thailand as refugees and then made their way to America and Minnesota.

When the idea of a Chinese friendship garden was first proposed in Phalen Park, the Minnesota China Friendship Garden Society wasn’t sure the location was appropriate, since the park is used by so many Hmong people.

However, throughout the process, people involved in the project learned Hunan is actually an ancestral homeland to the Hmong, said President Linda Mealey-Lohmann. Today, 3 million Hmong live in Hunan province. Senator Foung Hawj, when sponsoring a bill to get $50,000 for the project from the Minnesota Legislature’s Legacy Fund, suggested the garden includes Hmong symbolism.

“They really helped educate us and the board about the connection in China,” Mealey-Lohmann said. Members of the Hmong community met with architects from Changsha in 2015 to discuss how to include Hmong elements in the garden.

The process has caused healing over the ancient rift between the Chinese province and the Hmong diaspora, who was pushed from the area by the Chinese government long ago.

St. Paul Parks and Recreation Landscape Architect Alice Messer, who worked with the Hmong community, Chinese architects Jennifer Junfang Fan and Jon Youhua Wen, and the Minnesota China Friendship Garden Society on the project, said she has seen powerful conversations on healing and reconciliation occur throughout the process of planning the garden.

“As the Hmong moved from China to place to place, is it a chance to start this story and the healing process,” she said. The garden is meant to bridge cultures, she noted.

Minnesota Hmong and Hunan Hmong share a common ancestor, Chi You, who is one of ancient China’s three grand ancestors, along with the Yellow Emperor and Yan Di. He is buried in Da Xiong mountain in Xin Hua City, about 2.5 hours southwest of Changsha.

The Minnesota China Friendship Garden Society is currently seeking funds for the Hmong Culture Wall, which will be installed in 2018, Mealey-Lohmann said. The wall will feature Minnesota and China Hmong stone-crafted symbols. The society needs to raise $150,000. The society is also raising about $2 million total for the Hmong Cultural Plaza for future features. An artwork gift from the Hunan Hmong to Minnesota Hmong is planned.

The total cost for the garden elements in 2018 is $700,000. The replica of Changsha’s famous Aiwan Pavilion is a gift; also to be completed in 2018 is an entrance arch, donor wall, the Hmong wall and garden designs.

The China Garden will be built north of the Phalen Park picnic pavilion and east of the Stone Arch Bridge along the lake. It will be near Public Art St. Paul’s “Minnesota Rocks!” sculpture “Meditation” that was created by internationally known Changsha sculptor Master Lei Yixin in 2006.

Phalen Park hosts an annual two-day Dragon Festival in July to view the 40-foot long Chinese dragon boat races. The festival also includes Asian performances and martial arts demonstrations. The friendship garden site was dedicated during the festival in 2016, with a blessing from the Hmong community.

The first Hmong refugees settled in Minnesota in 1977. Today, 80,000 Hmong make Minnesota the state with the largest Hmong population. A majority live in St. Paul and frequently use Phalen Park.

The Chinese community has a history in Minnesota dating back to the 1870s. The idea of a China garden in Minnesota came from Professor C.C. Hsiao and Mealey-Lohmann in 2000.

China garden elements include architecture, pathways, rocks, water and vegetation. The architecture is meant to remind people of specific parts of nature. The philosophy of a China garden is to appear part of nature though man-made, enhance people’s connection to nature, and be responsive to human needs while respecting nature. The history of such gardens dates back over 3,000 years. 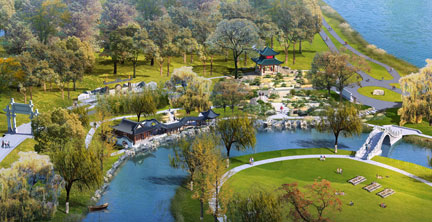