For Diane Moua, Dessert Is A Piece Of Cake

A couple of weeks ago, the James Beard Award Foundation announced the 2019 list of Restaurant and Chef Award semifinalists. Twin Citizens found, to their delight, that Minnesota is very much on the culinary map.

Meanwhile, in the Outstanding Pastry Chef Category, Diane Moua of Spoon and Stable, Bellecour, and Demi, has been nominated for her fourth consecutive year. First nominated in 2016, she is the first ever Hmong-American woman to vie for an esteemed James Beard award, based on The Hmong Times’ research.

Moua has been, for several years, taking over the world of plated desserts with quiet ferocity– rooted in seasonality and what farmers are providing, her harmonious designs bring together flavors both nostalgic and new.

And it all began with supermarket confections.

“My mother had two jobs, so she was never home. Being the girl, I would do everything at home, like cleaning, cooking, all that,” says Moua, who is second eldest of six children, “I worked at a grocery store and saw these beautiful cakes. I thought, that’s what I want to do– make pretty cakes.”

Once she was enrolled in the culinary program at Le Cordon Bleu in Eagan, Moua knew one thing for certain: she wanted to work with the best. She landed an internship at Stillwater’s La Belle Vie, and found herself in the strange environs of the fine dining establishment– a gourmand’s paradise, with an overabundant supply of silverware.

“I had never worked in a restaurant before. I remember walking in, and I saw all the tables set with so many little forks and knives I had never even seen before,” Moua remarks, “I didn’t grow up eating out. For my family, dessert on special occasions was McDonald’s apple pie.”

After graduating, Moua started her professional career working at Chef Marcus Samuelsson’s Aquavit under Executive Pastry Chef Adrienne Odom. Despite a disastrous first day, she got the job and persevered. Her palette continued to expand, and she never doubted her place in the kitchen– or in the resistance.

Now, she has helped open three restaurants in four years, and all while juggling her responsibilities as a wife, daughter, and mother.

“It’s hard to come to work everyday, and on weekends and nights, and then go home and be a traditional Hmong mother, daughter, and wife. Work-life balance is my big initiative right now,” Moua, single mother of two, asserts, “It was like having two jobs, and I needed support. What I want is equality. I can be traditionally Hmong, and I can be American, too. ”

Growing up as the daughter of Hmong refugees in rural Wisconsin, Moua didn’t have an easy time blending her two cultures. Long-time white residents in Junction City, her hometown, were often hostile towards her newly immigrated family.

“People would dump dead fish and calves in our driveway. I remember on the bus my classmates would ask me what I ate, and when I would say chicken and rice, they would be like, “So you didn’t eat dogs and cats?” The neighbors smashed our mailbox so many times that my parents have a PO box at the post office to this day,” Moua says, “I wish I could’ve stood up for my parents back then.”

Although anti-Hmong hate crimes continue to rupture Junction City, Moua believes that the community has, after three long decades, accepted her parents. In spite of difficult memories, she relishes every opportunity to go back to her parents’ farm– this summer, her goal is to learn how to prepare her father’s zaub pos ntsev (fermented mustard greens), and teach her daughter the ins and outs of butchering a chicken.

“Going home and eating home-cooked meals is the best. You can kill a chicken, boil it, and season it with salt, pepper, and lemongrass, and that’s it,” she contends, “My parents grow a bunch of vegetables, including asparagus, which is my favorite; fresh asparagus is so sweet when it’s picked. You just can’t get that in the city.”

At Demi, Moua is flanked by a Hmong-American sous chef; although the two speak different dialects, Hmonglish often flies around the kitchen. In addition, inspired by her parents’ recipes– dad’s tofu and mom’s sesame balls– Moua is drawing on her Hmong heritage to create innovative plated desserts infused with the taste of home. “This is the first time that I’ve incorporated things I’ve learned from my parents into a menu,” she reflects.

While Moua’s parents were initially resistant to her culinary career, she says that they have grown to understand and support her in the past years. “My parents came here as refugees from Laos so I could have freedom. They struggled, and I’m working hard because they instilled that in me. I don’t want my kids to forget that,” she affirms.

Moua wants to be remembered simply as a woman with formidable work ethic, but she doesn’t leave her Hmong identity at the door either. Instead, she pulls her strength and sense of purpose from her history. 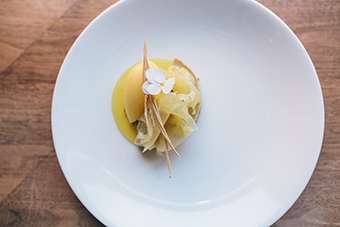 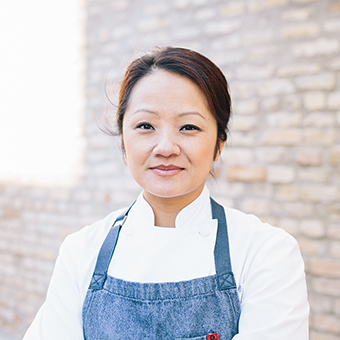